Data from NASA point to a powerful Pacific La Nina event in the works, and so with it could bring a considerable drop in the mean global surface temperature in 2021.

According to the latest report issued by the Australian Bureau of Meteorology (BOM), the La Niña conditions continue in the tropical Pacific: “International climate models suggest it is likely to continue at least through February 2021.” 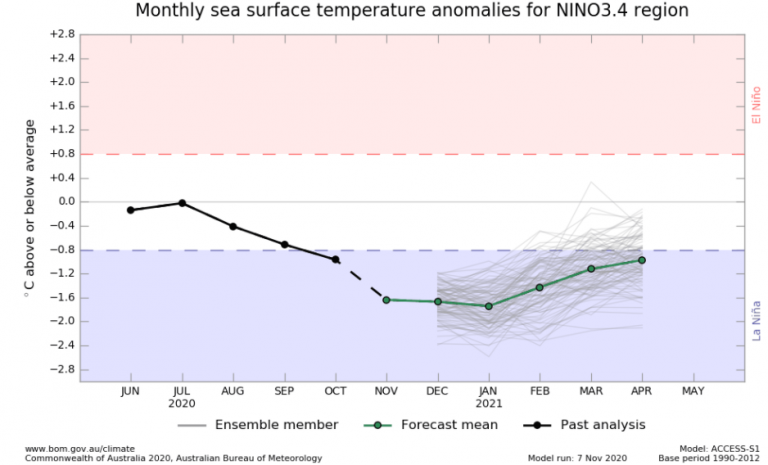 The BOM uses the ACCESS–S model for generating its forecasts.

Mean while Snowfan here reports that NASA prognoses are in fact expecting an “unusually powerful La Niña development, with cooler than normal surface anomalies extending into the summer of 2021 and which could become an extended year-long event, which also occurred in 2010 – 2012. 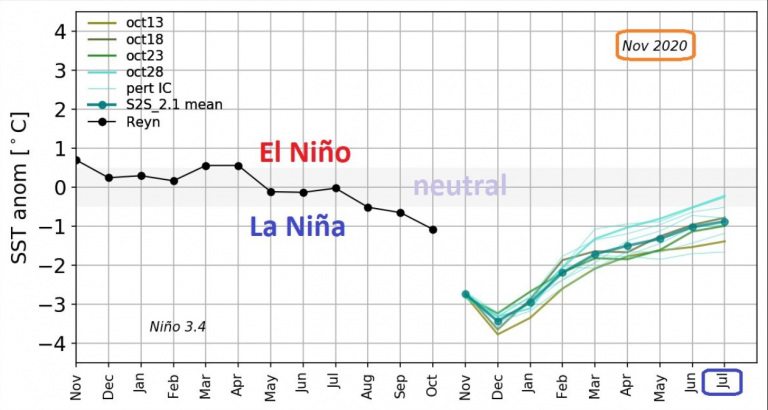 “November 2020 sees an unusually strong La Niña in the equatorial Pacific with temperature deviations down to below -3°C and with unusually long duration until NH summer 2021,” Snowfan writes. “If the current NASA forecast is correct, a multi-year La Niña could develop into 2022, just like in 2010-2012.”

Strong and long La Niña events cool the Earth by several tenths of a degree Celsius with a time lag. The overall global cooling occurring since 2016 will therefore continue at least until 2021 and could even last until 2022.

The BOM notes that La Niña events “typically enhance spring rainfall in northern, central and eastern Australia” and that during a La Niña summer, “above average rainfall is also typical for much of eastern Australia, but particularly eastern Queensland”. But such good news comes with a price: Rainfall means more vegetation growth, which in turn will lead to much more fuel ffor uture bush fires when drought conditions return, as they always inevitably do.