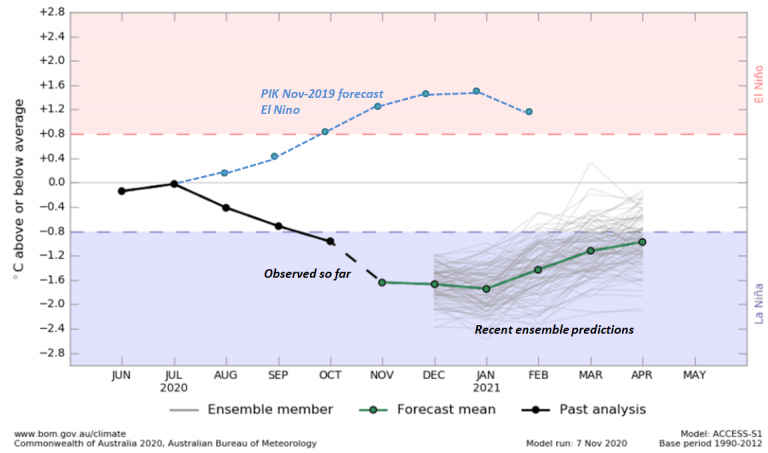 In 2019, Germany’s Potsdam Climate Institute (PIK) boasted that it had a superior El Niño forecasting model, claiming one year in advance and with 80% certainty, there would be an El Niño event late in 2020 (upper curve is just an El Niño illustration). But the PIK model forecast flopped totally. The opposite has in fact emerged. Chart source: BOM (with additions).

One year ago, together with researchers of the Justus Liebig University Giessen (JLU), and Bar-Ilan University in Ramat Gan in Israel, Germany’s alarmist yet highly regarded Potsdam Institute for Climate Research (PIK) boldly declared in a press release there would “probably be another ‘El Niño’ by the end of 2020.”

The PIK November 2019 press release bragged that its team of researchers had developed a new, far better model – which they said was capable of forecasting a late 2020 El Niño event a year in advance: “The prediction models commonly used do not yet see any signs of this,” the PIK press release wrote.

The PIK press release then called the early forecasting model approach “groundbreaking”, claiming it was based on a “novel algorithm” developed by its team. Their forecast relied “on a network analysis of air temperatures in the Pacific region and which correctly predicted the last two ‘El Niño’ events more than a year in advance.”

“Conventional methods are unable to make a reliable ‘El Niño’ forecast more than six months in advance. With our method, we have roughly doubled the previous warning time,” stressed JLU physicist Armin Bunde, who initiated the development of the algorithm together with his former PhD student Josef Ludescher.

Prof. Hans-Joachim (John) Schellnhuber, Director Emeritus of PIK, explained: “This clever combination of measured data and mathematics gives us unique insights – and we make these available to the people affected.” He pointed out that, of course, the prediction method did not offer one hundred percent certainty: “The probability of ‘El Niño’ coming in 2020 is around 80 percent. But that’s pretty significant.”

Using data from the past and with the help of of their algorithm, the PIK scientists said El Niño events could then be “accurately predicted the year before”.

Today, one year later, in November 2020, we see that the opposite is in fact occurring, see chart above. Now the equatorial Pacific is entering a La Niña event instead of the almost certain El Niño claimed earlier by the now embarrassed PIK researchers.

The PIK’s “high certainty” forecast misses totally and so underscores the risks and pitfalls of being overconfident when it comes to still poorly understood complex systems.

And if scientists struggle predicting just one single regional component of the entire climate for just one year, then imagine what the reliability of their complete climate system predictions going out decades has to be. GIGO!