The earth came very close to that point not long ago during the Ice Ages (20,000 years ago). Then the planet warmed naturally, and an increase in atmospheric CO2 to over 200 ppm followed (new study here).

The earth saw CO2 levels of close to 8000 ppm in the past, i.e. about 20 times more than today. The following chart shows the earth’s atmospheric CO2 concentrations for the past 600 million years. 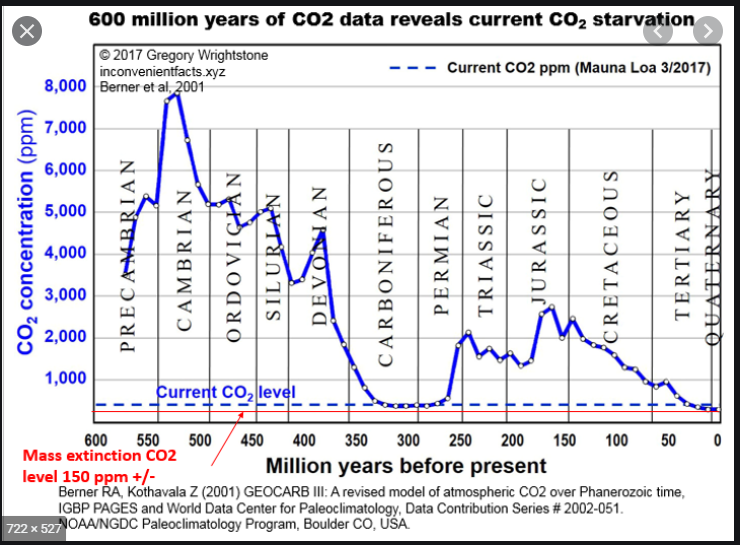 Today, thanks in large part to mankind, concentrations have risen to over 400 ppm, yet historically this remains at the very low end of the scale compared to the thousands of ppm seen naturally earlier in history.

Today, definitely a safer level would be near 1000 ppm. Studies unanimously show plant growth at these higher levels is far enhanced. Already today we see clear evidence the planet is greening Zhu et al. (2016), in part due to the fertilizations taking place through human emissions:

Figure 1: Trends in Leaf Area Index around the planet. Note the units are in hundredths (10-2) of meters per square meter. An increase of 25 (Purple, right end of scale) is actually an annual change of .025 square meters per year. Note that the largest greenings are in fact over the South American, African, and Australasian tropical rainforests.

Greening across the world

German science magazine Wissenschaft reported not long ago: “Vegetation on earth has been expanding for decades, satellite data show.”

Some alarmists claim drought is spreading, but Wissenschaft magazine reports: “The opposite is the case: according to a report by the Intergovernmental Panel on Climate Change, satellite observations show a greening of vegetation over the past three decades in parts of Asia, Europe, South America, Central North America and Southeast Australia.”

“Although there are regions that would become browner, the bottom line is that there is a larger area on our planet that is greened than browned,” the German science magazine notes.

Thanks to CO2 fertilization

For the welcome trend, scientists attribute the surprising development on “a mixture of factors”, foremost the recent increase in atmospheric CO2 concentration, which plants thrive on and humans have been mislead into believing is a “pollutant”.