Alps ice-free…6000 years ago, when CO2 was much lower than today’s levels.

The latest Klimaschau report, No. 6, looks at glaciers in the Alps over the course of much the Holocene.

It turns out that Most of the Alps were ice-free 6000 years ago, glaciologists have discovered.

The video presents a new paper authored by glaciologists Bohleber et al, 2020 of the Austrian Academy of Science. The Austrian-Swiss team discovered from ice cores that the 3500-meter high Weißseespitze summit was ice free 5900 years ago.

Much warmer in the early Holocene

Next Klimaschau shows why the Alps were ice-free 6000 years ago by using a chart by Heiri et al 2015, which shows it was some 2°C warmer than today. 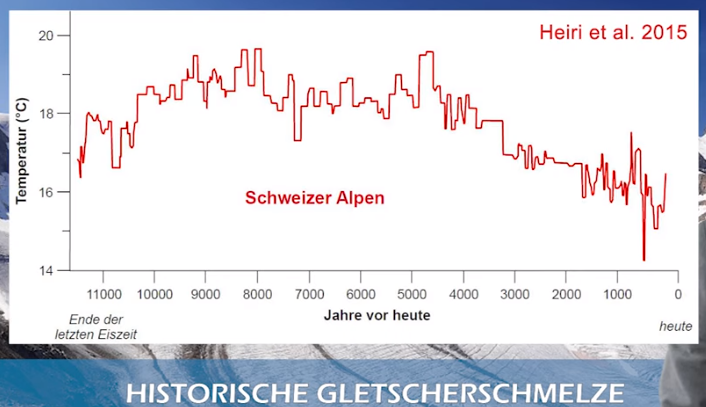 Beginning some 10,000 years ago, after the Ice Age ended, all glaciers below 4000 meters elevation in the East Alps melted away over the years that followed. Then beginning 6000 years ago, cooling started again and the glaciers returned (neoglaciation). Today temperatures in the Alps are still well below early Holocene levels.

5300 years ago, Ötzi succumbed to injuries just a few kilometers from the Weißseespitze, says Lüning. “The historical glacier melt show that today’s glacier retreat is not a new phenomenon. Whether or not there will be another complete melting of the East Alps glaciers remains a scientific debate.”

All images cropped from Klimaschau, Ausgabe 6