Data show the month of January has been cooling across the northern hemisphere over the recent decades as winters make a comeback. 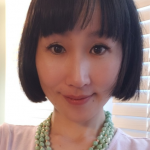 This is quite a reversal when we consider that many climate alarmist scientists like Rahmstorf warned two decades ago that snow would be a thing of the past. Yet Rahmstorf’s step back to reality ends there, as he still blames the cold bitter winter weather on warming.

Even climate warmist, veteran meteorologist Jörg Kachelmann thinks Rahmstorf is way off the mark, commenting as follows on his Twitter channel: “You don’t know which is more horrible and unscrupulous: all the right-wingers who see one winter weather situation as an argument against the climate crisis, or the desperately unscientific @rahmstorf, who now also attributes an ordinary winter weather situation to climate change.”

Today we look at January mean temperatures in the Nordic countries of Norway, Sweden and Finland. Surprisingly, as we will see, they are not cooperating with the claims of warming.

Using untampered data from the Japan Meteorological Agency (JMA), we examine 6 stations in Finland for which we have sufficient data to plot back over 3 decades: 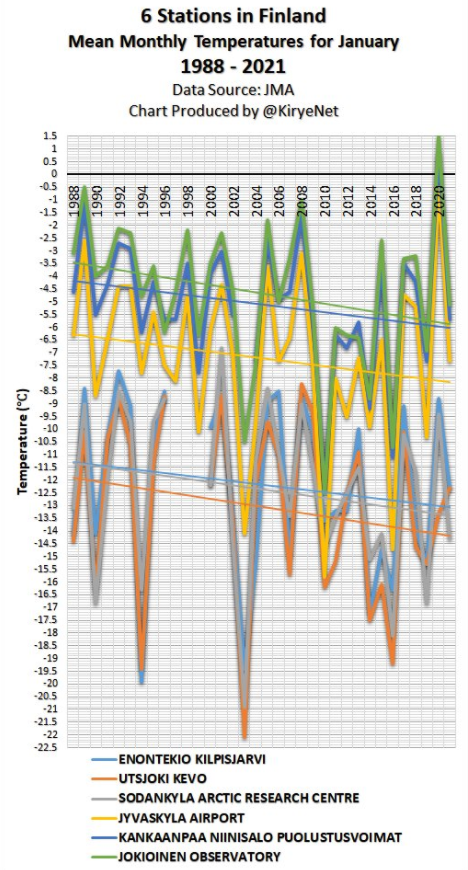 All six stations examined in Finland show a clear cooling trends for mean January temperatures. Little wonder Prof. Rahmstorf has to concede winter is far from being gone and thus some explanation is needed as to why things aren’t getting warmer in the winter.

January in Sweden is cooling

Next we look at January mean temperatures for Sweden at stations where the JMA has sufficient data to allow plotting back 3 decades: 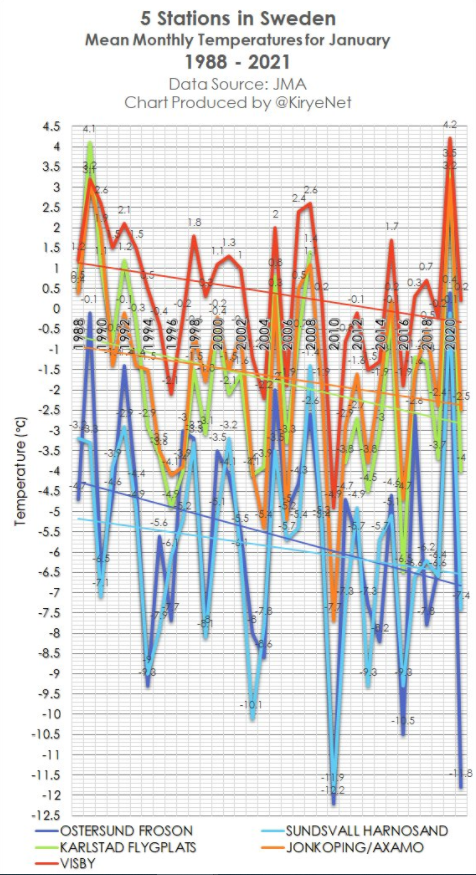 Here as well all five stations show the month of January has been cooling over the past 33 years. No wonder snow and ice aren’t becoming a thing of the past. Quite to the contrary as Prof. Rahmstorf now concedes. But the cooling is due to the warming, he insists!

Norway also showing no signs of warming in January

Next we look at Norway, Scandinavia’s most western country. Examined here are 11 stations: 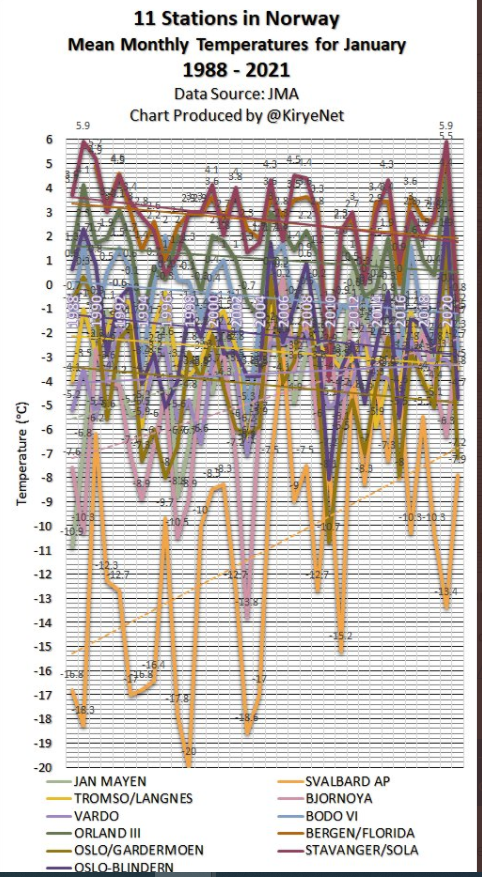 In Norway, 9 of the 11 stations examined showed no warming, or even cooling. Yet, Norway’s coldest station showed a strong warming trend. Perhaps Prof. Rahmstorf will claim that this supports his fantasy-rich theory of a warmer Arctic at times is supercooling the middle latitudes in the wintertime.

Overall, January in Norway hasn’t warmed in over three decades.