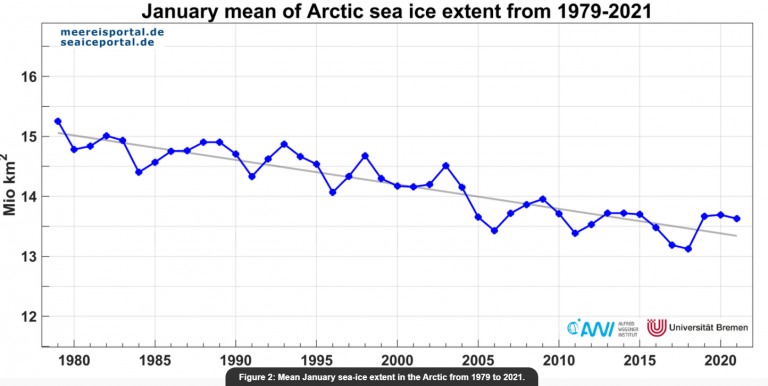 In January sea-ice grew at a rate of 47,518 km² per day. This represents a daily growth almost exactly the size of Lower Saxony (or Mississippi).

Germany’s Alfred Wegener Institute reports that current winter season in the Arctic is particularly influenced by the temperature anomaly, which in December produced temperatures up to 5°C above the long-term average for 1971 to 2000 in the Laptev Sea and Central Arctic, and over East Greenland and Northern Canada.

Siberia 6 to 8°C below normal

In contrast, in Siberia temperatures were on average ca. 2°C colder than usual, with a local record low of -49°C in Tomsk. This trend continued and intensified in January. Over the Central Arctic, North Greenland, Northern Canada and Alaska, there was a temperature anomaly of 3°C to 6°C above the long-term average.

At the same time, temperatures in Siberia were 6°C to 8°C below the long-term average.

As in the Arctic, the sea-ice extent in the Antarctic in December-2020 and January-2021 can be described as average.

In January 2021, the ice retreat in the Antarctic slowed to an average of 92,247 km² per day, resulting in a remaining extent of 3.4 million km² at the end of the month. 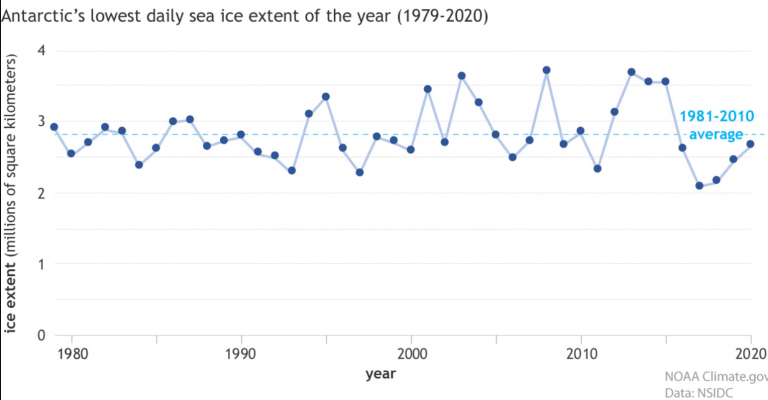 Compared to last year, there is significantly less ice in the northwest Weddell Sea and eastern Ross Sea, while along the coast of Eastern Antarctica, in the Amundsen Sea and in the eastern Weddell Sea, there are even larger areas of sea ice.