It’s hard to back up the statement: Global warming is global. Some places have seen warming over the past 40 years (e.g. Arctic), but other places have not.

Antarctica definitely has not been playing along with the man-made global warming hoax. (Yes, man has caused some of the warming, but not all – and it certainly isn’t catastrophic).

Though Antarctic sea ice fell to a “record minimum” in 2017 – after having reached a “record high” in 2015 – the latest data from the National Snow and Ice Data Center show sea ice at the South Pole has bounced back robustly since, surging some 500,000 sq km above the mean. 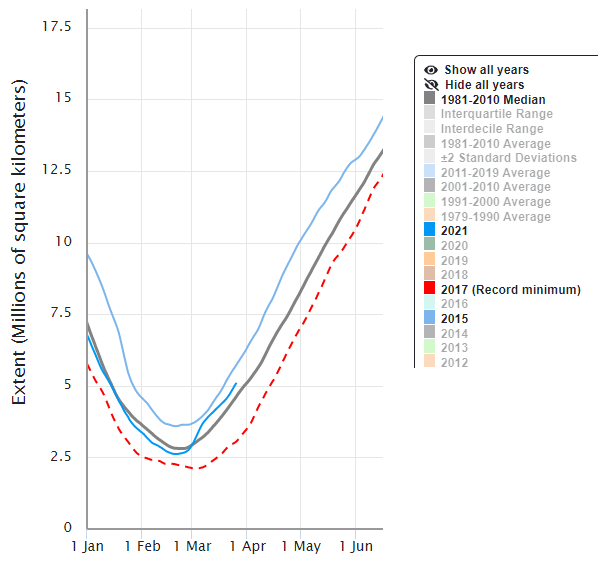 No way to ignore natural factors

So why would sea ice grow so quickly? If the ice had disappeared, many would blame it on greenhouse gases – absurd of course. And it would be just as absurd to blame the recent gain on global cooling. Obviously there is a complex array of natural factors at work – factors that climate alarmists consistently have ignored over the past decades. 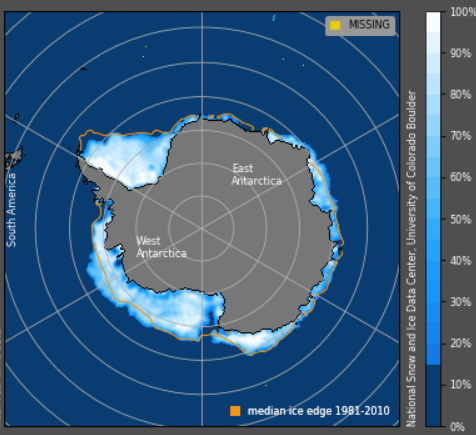 One interesting climate anecdote is spring trend in Hamburg, Germany. It appears that Hamburg’s forsythia flowering is occurring increasingly late, according to our friends at Die kalte Sonne here. Also not what we’d expect from “warming”.

The perceived beginning of spring in Germany is when the Hamburg forsythia bush in the city centre blooms. The location at the Lombardsbrücke on the Alster is well suited because the surrounding area has hardly changed in the last 50 years. Phenologist Jens Iska-Holtz dates the flowering date for 2021 on the 25th of March, which is 84 days since the beginning of the year. Over the last 50 years, the following graph emerges:

Fig. 1: Development of forsythia flowering in Hamburg since 1972. The X-axis shows the years since 1972, the Y-axis the flowering date, measured in days after the beginning of the year, i.e. from 1 January.

There has been no significant trend in the flowering dates of the Hamburg forsythia bush on the Alster. The average is 79 days from the beginning of the year. At 84 days, the start of flowering this year was slightly above the average.

Next we take the new climate reference period 1991 to 2020 as the period under consideration:

Fig. 2: Development of forsythia flowering in Hamburg since 1991. Note: rising trend line means delay. At the beginning of the observation 31 years ago, the forsythia tended to flower at the end of February, the flowering date moved further and further back into March. The last February flowering was in 2008.

What explains the delay in spring since 1991 in Germany? Global warming? Carbon dioxide?

Fig. 3: February temperatures in Hamburg since 1988 according to original data from the German Weather Service.

Let’s move on to the question of the year since which the forsythia blossom has been delayed:

Fig. 4: Since 1985, i.e. for 37 years, the forsythia, the DWD’s flagship shrub for the beginning of spring in Hamburg city center, has shown a slight delay in flowering of 5 – 6 days.

The reason for the rising trend line and thus the delay is probably the warm February months of 1988/89/90 at the beginning of the observation period.

Result: Forsythia flowering has been slightly delayed for approx. 37 years – quite clearly from 36 years onwards – although the shrub is located in Hamburg’s inner city, in a heat island. You will probably look in vain in the media for reports on the delay trend of the Hamburg spring bloomer.

Those who read the Die kalte Sonne [or NoTricksZone] blog will therefore know more.