Another signal that the German Energiewende (transition to green energies) is not working out are actions and comments recently coming from the German Ministry of Food and Agriculture, as reported 2 days ago in a newspaper: (Hat-tip: Misaki – im Widerstand) 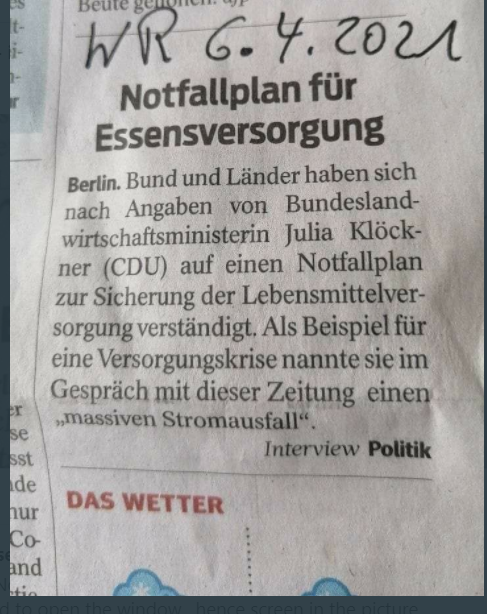 “Emergency plan for the food supply. Berlin. The Federal Government and the states have agreed on an emergency plan for securing the food supply, according to information from Federal agriculture Minister Julai Klöckner (CDU). as an example for a supply crisis she named a ‘massive power outage”, she told in an interview with this newspaper.”

Germans scale back on wind energy

The German government loves to talk about the importance of green energies, but when it comes to their expansion, it is in fact doing the opposite: Old wind turbines are being removed without being replaced by new generation turbines.

Perhaps it’s beginning dawn on the German government that especially wind and solar energy just aren’t working out, and so they have massively scaled back subsidies with the aim of scaling them back.

More and more old wind turbines coming off the grid

NDR featured the dismantling of three wind turbines in Altenstedt (Lower Saxony) after having been in operation for 20 years. “They are no longer profitable to operate” after the expiry of the 2o years of guaranteed feed-in tariffs to their operators.

No longer economical without the subsidy

The three wind turbines together generated 2 million kWh of electricity annually, meaning 666,666 kWh/ turbine per year. But now that the subsidies have ended, owner Horst Mengels explains he can no longer operate the turbines economically at electricity market prices of less than three, sometimes even one cent. Menawhile private consumers of electricity now have to pay 30 cents and more for a kWh. Repair and maintenance of the turbines are no longer possible at the low market prices.

“Gravedigger of the Energiewende”

Mr Mengels has built 99 wind turbines, the last one in 2020. Last year he hoped for a satisfactory decision from politicians on how to proceed with the old turbines, but in disappointment: “Politics is completely despondent, hesitant and dithering. Economics Minister Altmeier is the gravedigger of the energy transition.”

For the proponents of green energies, Germany’s retreat is baffling in the least. Veronika Grimm, Energy Transition Commission of the Federal Government is convinced that, contrary to the opinion of the Federal Government, electricity consumption is not declining. It estimates that in this decade electricity demand will increase by up to 30% – through electromobility, heating with electricity and heat pumps, the hydrogen strategy.

More coming offline than what is being added

Last year, only 200 new wind turbines were built. At the current rate, more turbine capacity will be coming offline than what is being added.

Prof. Volker Quaschning, expert on green energies, says that the dismantling of wind (and PV) plants, spurred on by the expiry of subsidies, sets back the energy turnaround by years. “If you look back, 20 years ago more was built than what we see today. There is a danger that at some point we will end up with zero new construction, or even a net reduction. – Then we won’t need to talk about climate protection in Germany any more.”

The NDR reports that in the coming years, 16 GW of wind power will be removed from the subsidy system. Almost two-thirds of this may not be replaced by new, more powerful ones.

As far as Altenstedt goes, where the three featured turbines are being dismantled, the NDR reports: “No more wind turbines may be built in Altenstedt, there are no more planning permits. The energy transition is now history here.

The remaining infrastructure: transmission lines, access roads, transformers etc. are available and are now no longer being used. In Altenstedt they will probably become the first relics of a past idea that went sour.

NDR summarizes: “The consumer has paid around 30 billion euros a year in feed-in tariffs. […] a lot of money for an instrument that fails to deliver”.