The COVID crisis worked wonderfully for the cheerleaders and addicts of lockdowns. It showed that it was indeed possible to panic the pubic enough to get them to accept restrictions and lockdowns.

But everyone knows that the days are numbered for the COVID crisis, and so another crisis will be needed if the wonderful lockdowns and restrictions are to continue. But the “climate crisis” is just so old and much of public just isn’t buying it. Another crisis is needed to fan the flames of panic and to keep liberty at bay.

What could it be?

One crisis now circulating is the “global water crisis”. That, in combination with the global warming crisis, of course is leading to mass crop failures, thirst and later mass starvation in hundreds of millions, unless we act (lockdown) now.

In a brand new interview, yet another balding European doomsday scientist is warning we are now in the midst of a global water crisis – and of course time is running out and fundamental changes need to be enacted rapidly, among them a meat lockdown.

Signs of course are forest fires in California and Oregon caused by severe drought. And using just three years of below normal rainfall as scientific evidence, even Germany is allegedly drying out, Gerten suggests.

Gerten warns that even with a global warming of just 2 degrees, water shortages in some regions would worsen significantly. Never mind what experts like the NOAA claim – omething Gerten avoids mentioning.

For Europe, Gerten is predicting much wetter winters, and extremely drier summers, and warns this will have dire consequences for agriculture.

Water as a human right

As a solution, Gerten cited Peter Gleick in suggesting a new integrated eco-system management and water ethic that views water as a human right.

To limit evaporation from agricultural land, Gerten suggests covering croplands with straw to hold in the moisture. Another solution is rainwater harvesting in ponds for use during dry periods. “Field studies show that crop yields can be doubled, or even quadrupled, simply by using water better, ” Gerten explains.

Why do PIK scientists know this, and farmers don’t?

“Not long ago, we calculated globally that if such measures were implemented on all existing agricultural land, then we would find massive production increases everywhere that is colored green (17:42) […] yields would increase without having to use one drop of water more.”

Gerten warns that climate change is going to make food far more difficult, especially in the red-colored regions (20:50) due to more heat and drought.

Veggie diet can save 40% water

Later Gerten suggests that the water crisis could be in large part averted by humans adopting a vegetarian diet, which according to one study (Vanham et al 2016) requires some 40% less water for food production. 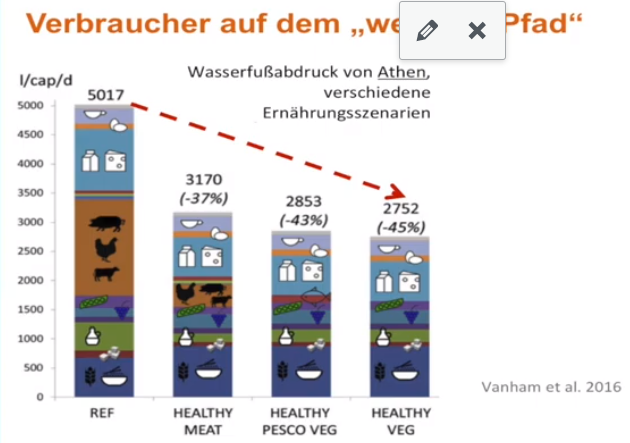 That’s the aim: to turn everyone into vegetarians. The meat lockdown is in the pipeline.

Posted in Drought and Deserts | 18 Responses