NASA tries to appeal to kids in claiming greenhouse gas molecules are “tiny heaters” that act “exactly how” the windows that prevent heat escape in a real greenhouse work. Observations show this is propaganda. 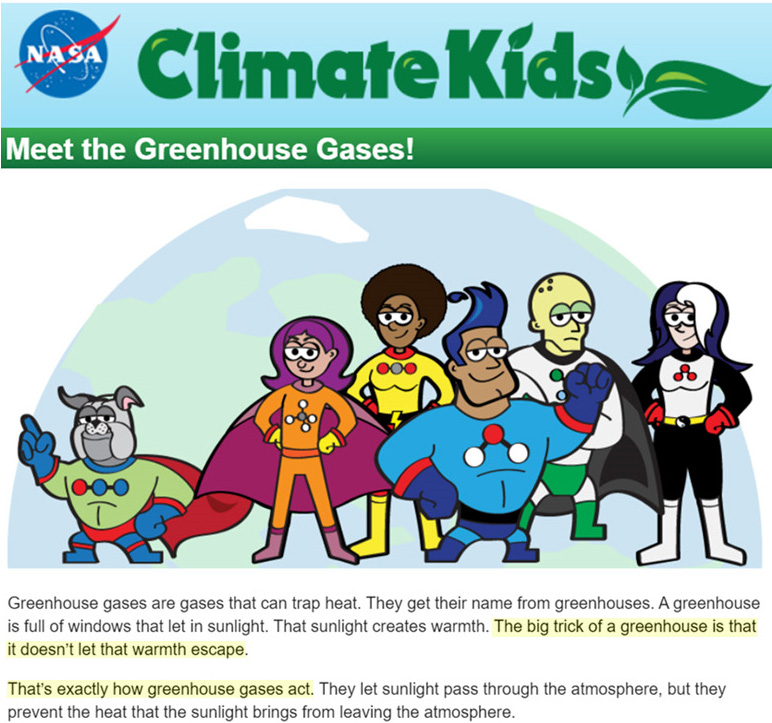 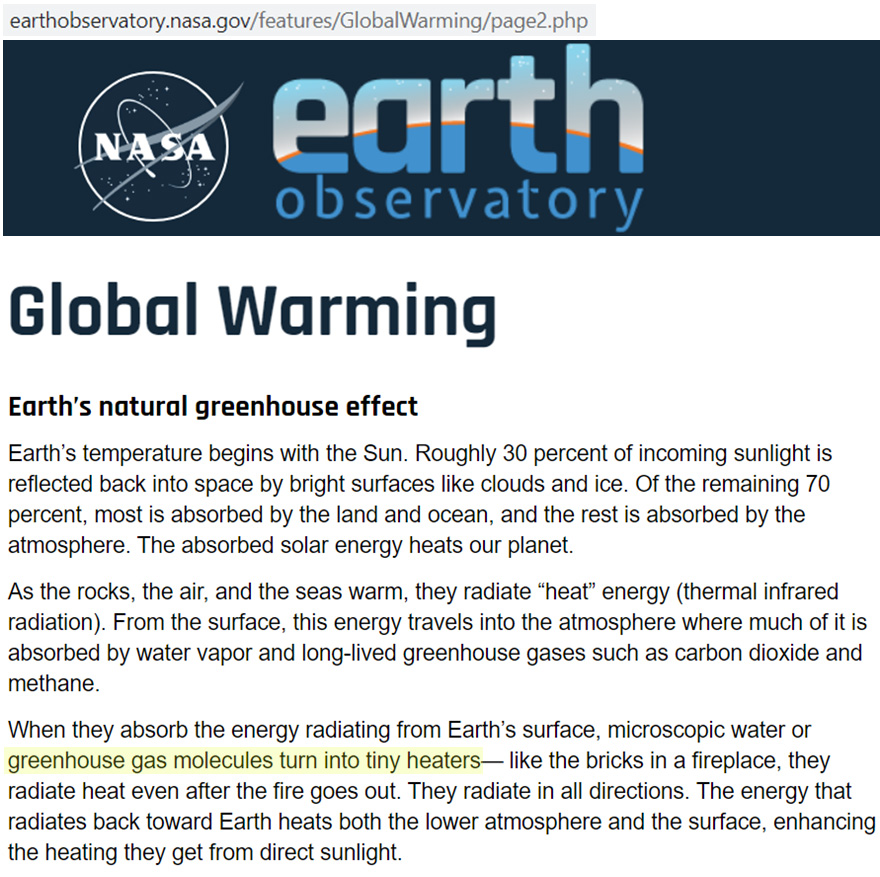 In claiming superhero-like greenhouse gases such as CO2 and water vapor act “exactly how” the windows that trap heat in a real greenhouse do, NASA has shown they will stoop to propagating non-science in their attempts to appeal to the less-informed.

Contrary to NASA’s claims, CO2 molecules do not act “exactly how” the walls of a greenhouse do. Real-world experiments have shown CO2 is no more or less effective at “trapping heat” than a non-greenhouse gas like Argon is, and air with 1,000,000 ppm CO2 is no warmer than air with 400 ppm CO2.

According to observations recorded by Linker and colleagues (1999), when the temperatures rise in the morning as sunlight penetrates through the windows of a real greenhouse, CO2 reaches 2000 ppm by about 7 a.m. Then, as the morning wears on, CO2 gradually falls to around 800 ppm between 10 a.m. and 2 p.m., or as the solar radiation reaches its 800 to 1000 W/m² mid-day peak.  By evening, CO2 gradually rises to 2000 ppm again before plummeting to below 500 ppm as the sunlight penetration diminishes.

There is no observable evidence provided showing CO2 alters the temperatures inside a greenhouse. Instead, the CO2 concentrations change in response to changes in solar radiation and temperature rather than acting “exactly how” warmth-amplifying  “tiny heaters” would in a greenhouse. 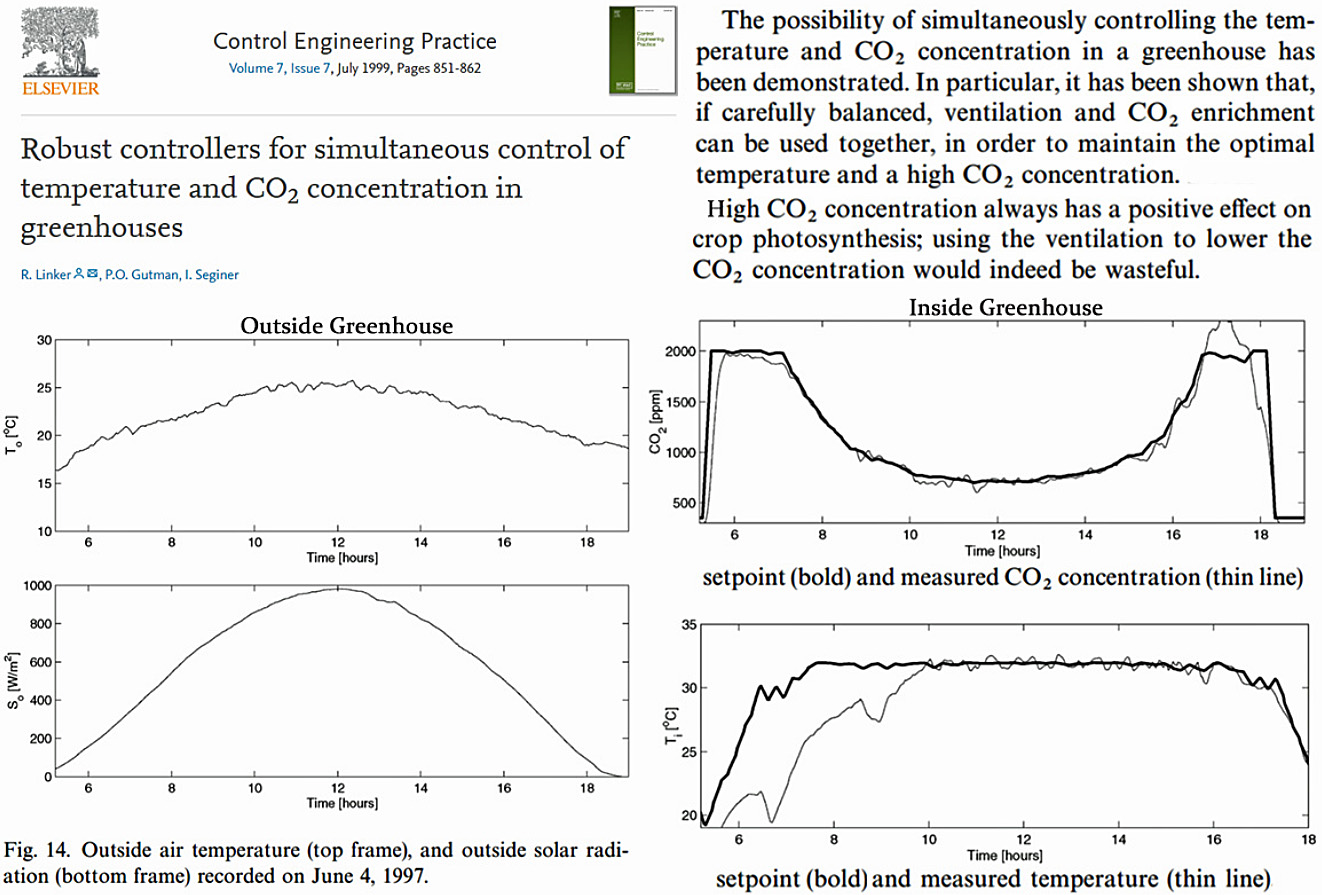 With regard to water vapor, real-world observations also serve to undermine claims that water droplets “turn into tiny heaters” in the atmosphere.

According to a 2018 study by Sherwood and co-authors, the last 100 years of anthropogenic water vapor emissions (mostly from irrigation) have produced a total effective radiative forcing of -0.1 to 0.05 W/m². In other words, adding more greenhouse gases in water vapor form leads to a “near-zero or small cooling effect.”

Sherwood et al. even acknowledge “large increases in anthropogenic water vapor emissions would have negligible warming effects on climate” because “greenhouse-gas warming is outweighed by increases in…humidity-induced low cloud cover.” And despite its non-superhero-like negligible effect, water vapor is ironically regarded as Earth’s “most abundant and powerful” greenhouse gas. 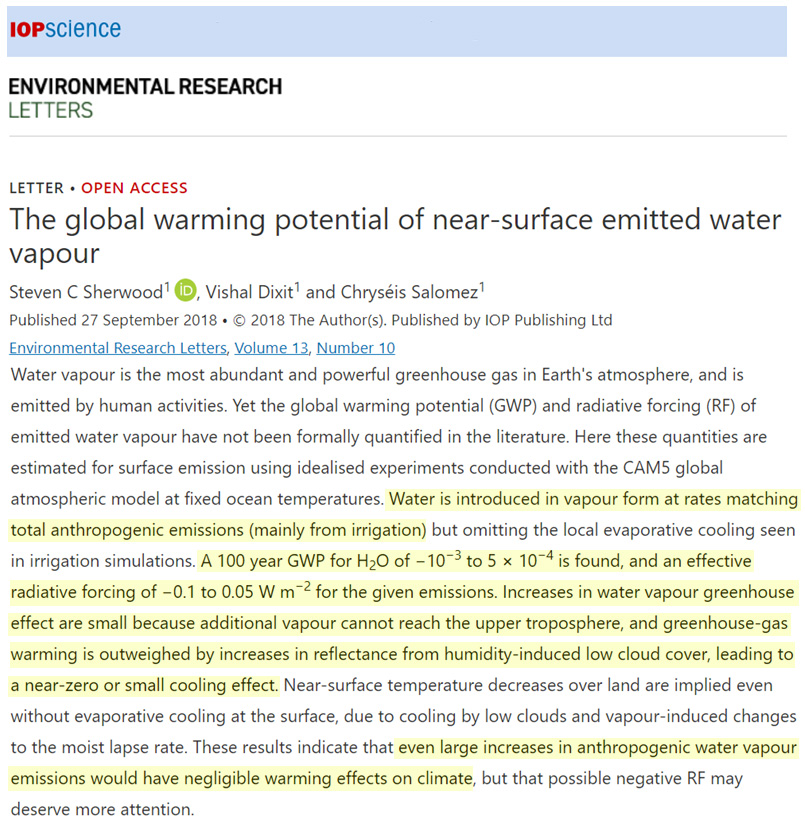 A new study (Krishnankutty Ambika and Mishra 2021) documents just how wrong NASA is to claim water vapor greenhouse gases act as “tiny heaters” in the atmosphere. The opposite actually occurs in the real world.

In the very same regions of India where irrigation has been most prevalent, significant growing-season cooling has been occurring. Land surface temperatures (LST) in the Indo-Gangetic Plain have cooled by -0.8°C since 1979, and this is “associated with the irrigation expansion” in the region. 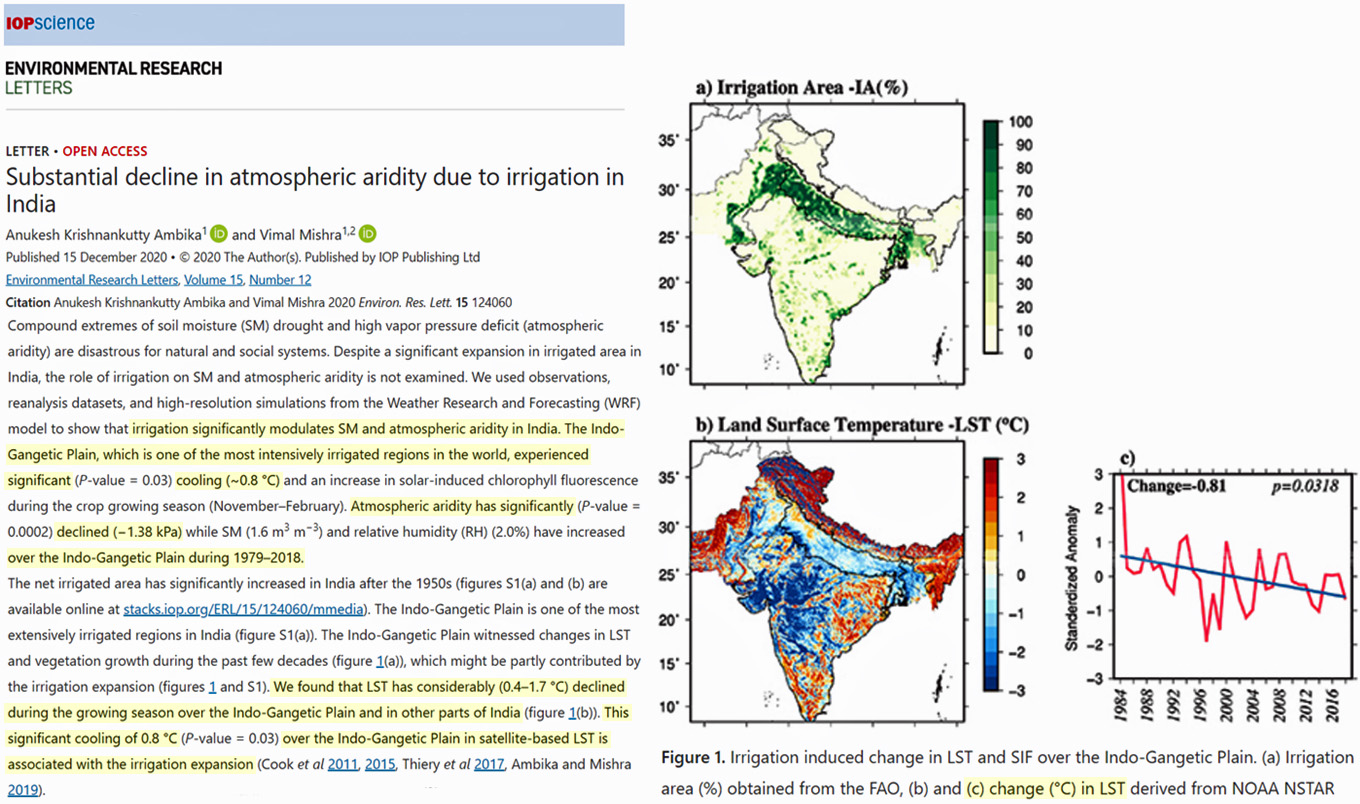 The same phenomenon has been observed in China. Scientists (Yang et al., 2020) even refer to adding anthropogenic water vapor emissions to the atmosphere as the irrigation cooling effect (ICE), which is “closely linked to the surface energy balance.”

Irrigation “cools daytime LST by 1.15 K, and cools nighttime LST by 0.13 K, on average, across the irrigated areas of China.” During the growing season, pumping Earth’s most powerful greenhouse gas into the atmosphere results in a cooling effect of more than 6 K in irrigated (ICE) regions compared to adjacent locations not subjected to greenhouse gas cooling. 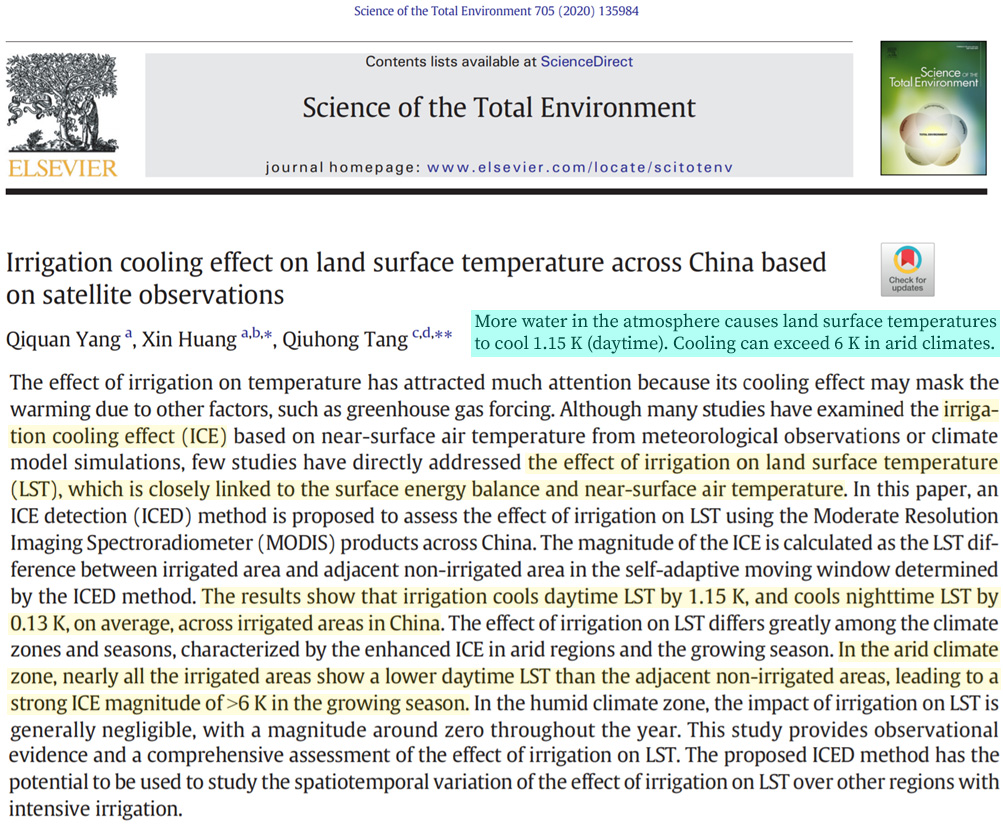 Recently it has been shown that NASA has been busy changing long-term cooling into long-term warming by altering the data.

A few years ago we reported that in the 10 years from 2008 to 2018, NASA artificially added 53% more warming to the 1910-2000 global temperature record by cooling the past and warming up more recent temperatures.

Now, with its cartoonish superhero appeals to children and simplistic imagery in claiming greenhouse gas molecules “turn into tiny heaters” in the sky, there is credible evidence NASA is actively engaged in peddling climate propaganda.