March In Canada, Alaska and Greta Thunberg’s Sweden Has Seen No Warming In Decades!

Global warming would mean winters are supposed to be getting shorter and spring arriving earlier. Therefore March should show a clear warming trend for the northern hemisphere.

The latest March data are now available from the Japan Meteorology Agency (JMA) and today we will look at Sweden, Canada and Alaska.

As you will see, contrary to the claims of global warming, the data show that the month of March has not warmed in decades.

First we plot the mean temperature for the surface stations in Alaska for which the JMA has sufficient data, going back almost 4 decades:

As the above chart shows, 8 of the 12 plotted stations show cooling or steady March mean temperatures – not what we really would expect from a planet that is alleged to be warming rapidly.

Next we plot the mean temperature for the stations in Canada, also for which the JMA has sufficient (untampered) data for more than 2 decades. Here’s what we get:

All stations in Canada show no warming since 1998! If anything, we have to say it’s cooled a bit. Data: JMA.

Finally we plot the March data for Sweden, here as well only the stations for which the JMA has adequate data: 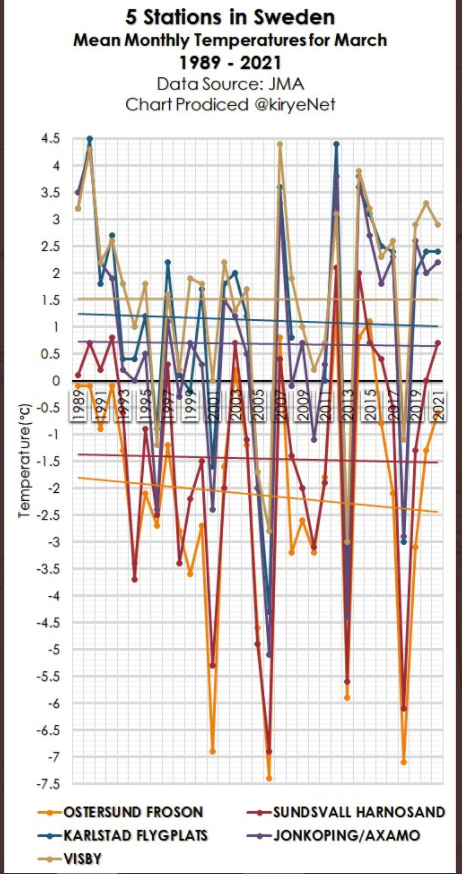 Here in Sweden as well all stations show no warming in March taking place. Winter is taking its time leaving.

Perhaps other locations on the globe have warmed, but the data show this has not been the case for Canada, Alaska and Sweden. The warming is not global.

And spring seems to be taking its time to arrive. Especially this year has seen a brutal extended winter across the northern hemisphere, and this has got the global warming alarmists twisting themselves into a pretzel to explain it.

Have a nice weekend everybody, and we hope spring will reach you soon – wherever you are. In Cheyenne (Wyoming), it’s been a brutally cold spring so far, and Pierre reports a very similar situation in Europe: Germany has been seeing one of its coldest Aprils on record!

5 responses to “March In Canada, Alaska and Greta Thunberg’s Sweden Has Seen No Warming In Decades!”