A series of over fifty 1-minute long satirical video clips made respectively by more than 50 German actors protesting the government COVID lockdowns, fear-mongering and suppression of dissenting views have sent shock waves across Germany.

More than 50 German prominent film and television personalities have sent a shockwave across the German speaking part of Europe  with a large-scale Internet action under the motto #allesdichtmachen (close everything down).

The artists such as Volker Bruch, Meret Becker, Ulrike Folkerts, Jan Josef Liefers and many more simultaneously released their ironic, satirical clips with personal statements on the German government’s Corona policy on Instagram and YouTube.

Leading German politicians and media outlets have reacted in anger, indignation and outrage that prominent figures would deviate and dare to challenge the state-imposed state of fear.

For example in his 1-minute segment actor Volker Bruch, speaking in somber tones, satirically criticized the state of fear that’s been thrust open the country:

My name is Volker Bruch. I’m an actor, and I’m afraid.
But I’ve noticed that I’ve been becoming less afraid, and that scares me.

For a whole year I was continuously afraid, but this fear is subsiding.
And that’s making me afraid.
I want to be even more afraid, because without fear, I’m afraid.
For that reason I call on our government: ‘Create even more fear!’
The citizens in this country need this fear.

Dear government, don’t leave us alone in this situation.
It’s so important that we all be afraid.

Government officials and the usual media suspects (Spiegel, Tagesspiegel, ARD, Die Zeit, etc.) lashed out that these talented performers would have dissenting views, characterizing their campaign as irresponsible, misguided, selfish and smacking of right-wing radicalism. 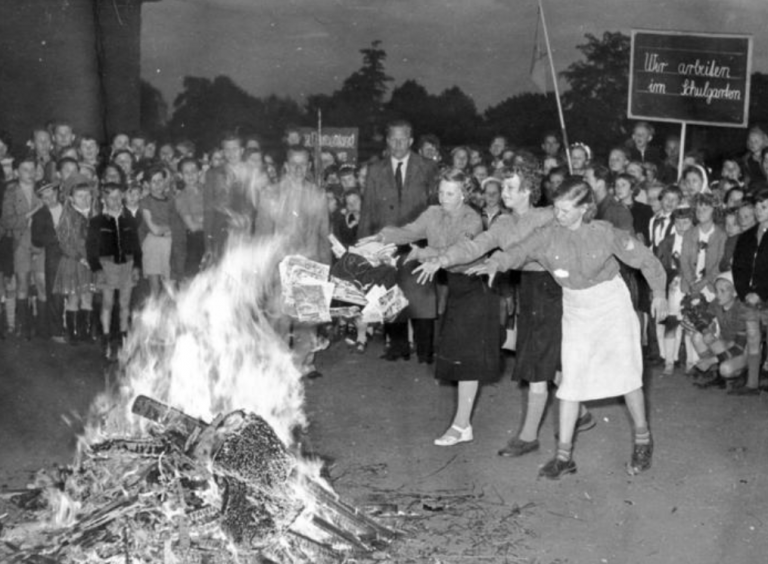 Germany again having problems dealing with a bit of dissent and in dependent thinking.

As the group of 53 performers are now finding out, anyone in Germany today deviating from the government’s and elitist media’s line of thought risks being branded a dimwitted contrarian, denier, anti-science ignorant right-winger and thus even deemed worthy of government surveillance.

The old book burning days are coming back

The government and its massive public broadcasting networks, along with mainstream media cohorts, have of course responded, and targeted the group of 5s maverick actors. Already eleven of the fifty have caved in and taken down their respective videos, fearing career repercussions.

So why would the 50 high profile actors suddenly speak up against measures that are greeted very positively by leftists? Such people are typically the sort we find left of center.

Most likely it has to do with the fact that the lockdowns and widespread public fear have taken a massive toll precisely on their industry. Though these 53 actors are themselves prominent and well off enough, many thousands of their colleagues in the arts, music, theater and show business have seen their lives totally ruined.

Earlier, when tens of thousands workers in the hotel, restaurant and travel industry had seen their livelihoods destroyed, their dries of protest went unheard. But now that 50 of the country’s most prominent performers have spoken up, it’s a whole new ballgame.