Browse: Home / 2021 / May / 13 / Rainforests Near The South Pole And Summers 38°C Warmer Than Today During The Age Of Dinosaurs 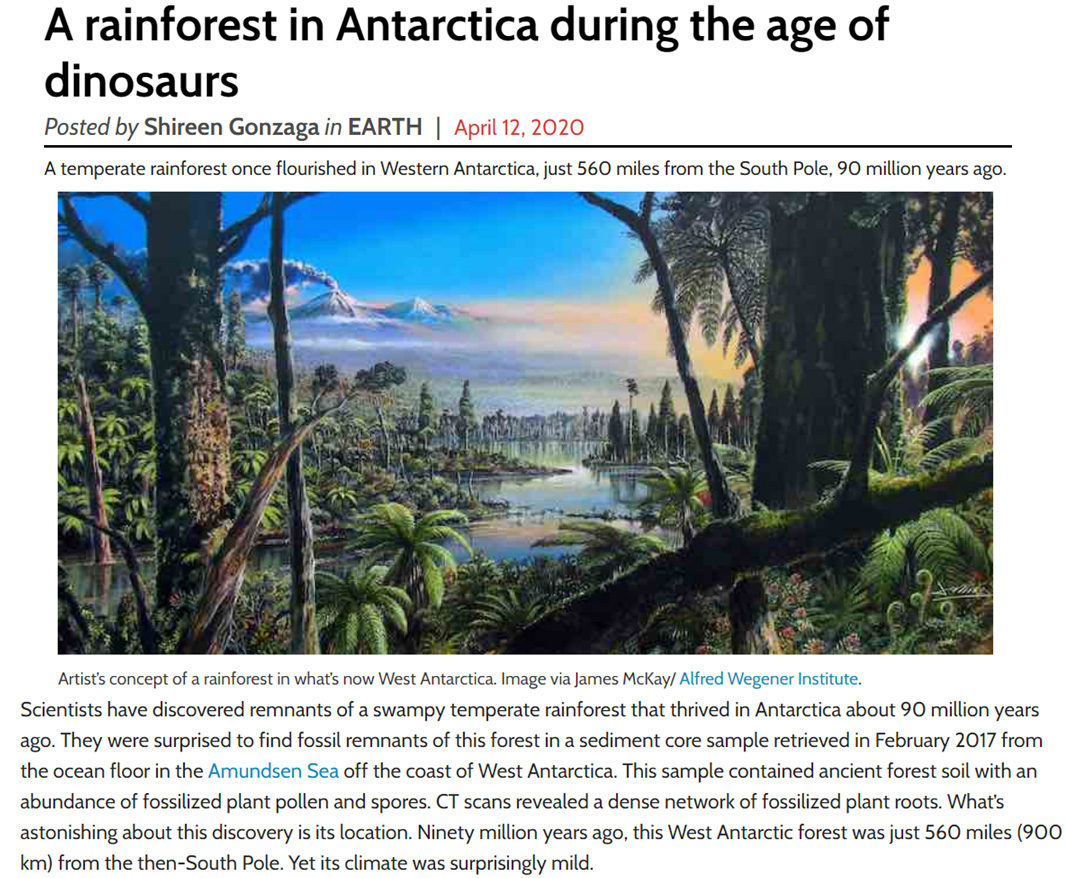 Despite rapidly rising CO2 concentrations, the Antarctic continent as a whole hasn’t warmed in the last 70 years (Singh and Polvani, 2020). 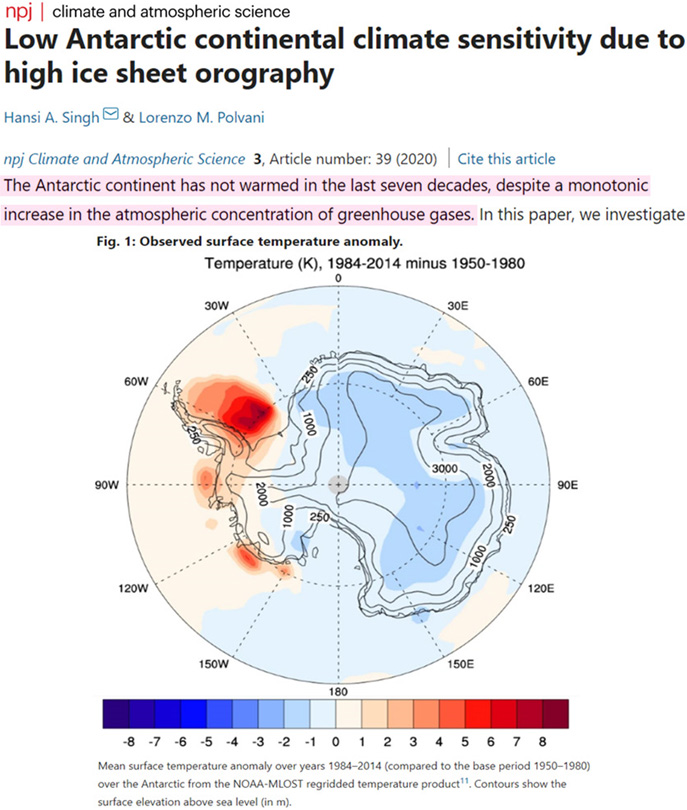 Scientists have determined that, for Central Antarctica, there is an increasingly negative greenhouse effect as CO2 concentrations rise (Schmithüsen et al., 2015). This means that the more humans emit CO2 by burning fossil fuels, the colder Antarctic temperatures get. The Northern Hemisphere also has a “comparatively weak” near-zero CO2 greenhouse effect for the Arctic (Greenland). These near-zero to negative CO2 greenhouse effect conditions are opposite the (modeled) expectation that rising CO2 amplifies warming in polar climates.

A fascinating but largely overlooked 2020 Nature study (Klages et al., 2020) reported Antarctica’s dinosaur-age climate was forested and about as warm as southern New Zealand’s today for the region just 500 miles (900 km) from the South Pole (82°S). 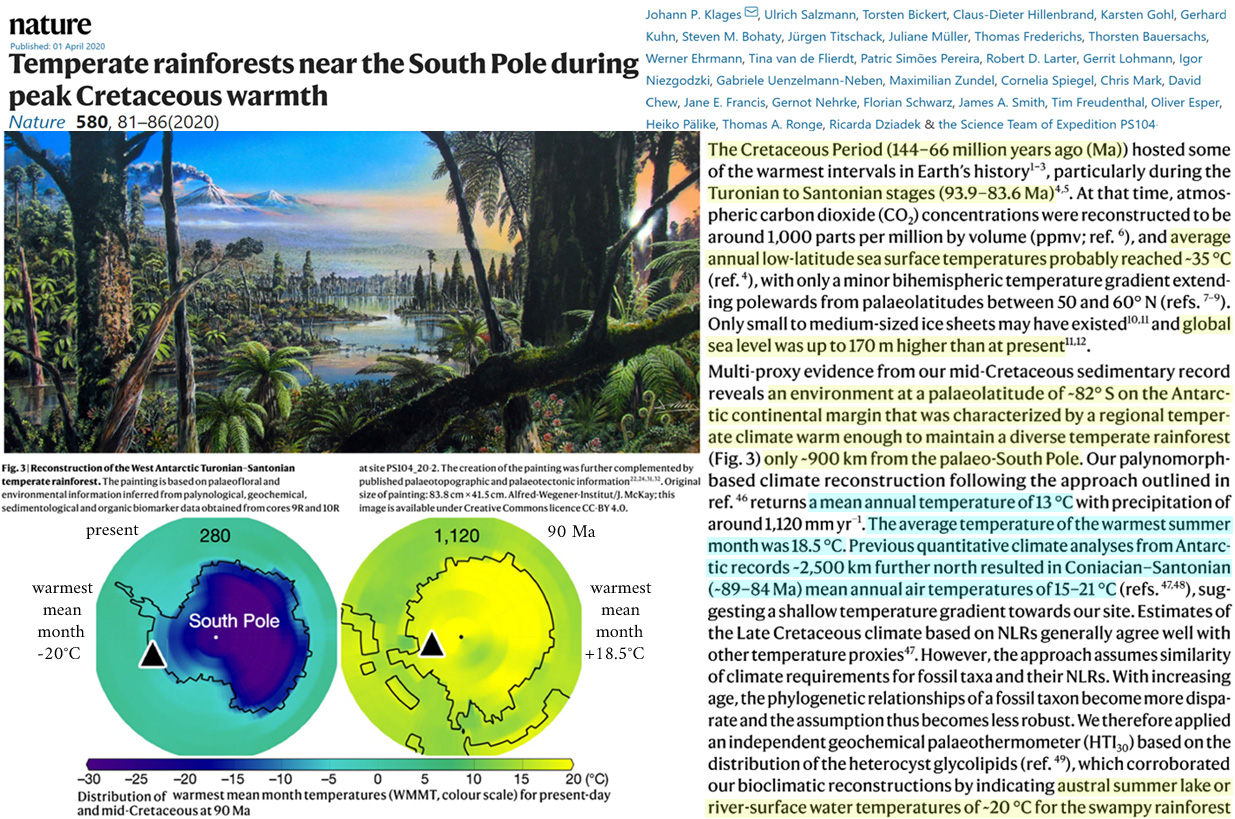 The authors indicate low latitude sea surface temperatures “probably reached ~35°C” during the Turonian to Santonian stages roughly 94 to 84 million years ago (Ma), which is 10s of degrees Celsius warmer than present.

For 82°S, the site of this study, mean annual temperatures reached 13°C about 90 Ma. River and lake temperatures reached 20°C in summer and there was “dense vegetation across Antarctica with little or no ice sheet present” (press release). The warmest mean month’s temperature was as high as 18.5°C, which is about 38°C warmer than today’s at this location.

Other climate reconstructions indicate Antarctica’s mean annual temperatures ~2,500 km north of 82°C ranged from 15-21°C from 89-84 Ma. Consequently, with a substantially diminished Antarctic ice sheet, global sea levels are thought to have been about 170 meters higher than today’s during this period.

Oddly, Klages et al.  contend CO2 is a driver of Antarctica’s climate in their study. They assert higher CO2 concentrations (i.e., 1,000 ppm) actually lead to substantial warming, not cooling. Apparently these scientists are not aware that rising CO2 concentrations have been determined to elicit a negative greenhouse effect (a cooling influence) for central Antarctica (Schmithüsen et al., 2015).