The April, 2021, mean temperature data collected by the Japan Meteorological Agency (JMA) has been tabulated and are ready to be added to our monthly plots.

Today we look at the April mean temperature trends for stations which the JMA has sufficient data and which are located in northern countries. Global warming is thought to be first visible at the far northern and Arctic regions.

The JMA has enough data for plotting April mean temperature at 12 stations in Alaska since 1988. Here’s the latest plot.

In total, 6 of 12 stations in Alaska (April) have no warming over the past 33 years. As a whole it cannot be argued that there’s been significant warming across Alaska in April.

In Canada, 6 of 9 stations for which the JMA has sufficient data have seen no warming since 1987:

Finally we look at Sweden, home of global warming alarmist teenager, Greta Thunberg, who claims warming is an existential threat to mankind and that the planet is rapidly heating up. But here’s the latest April plot: 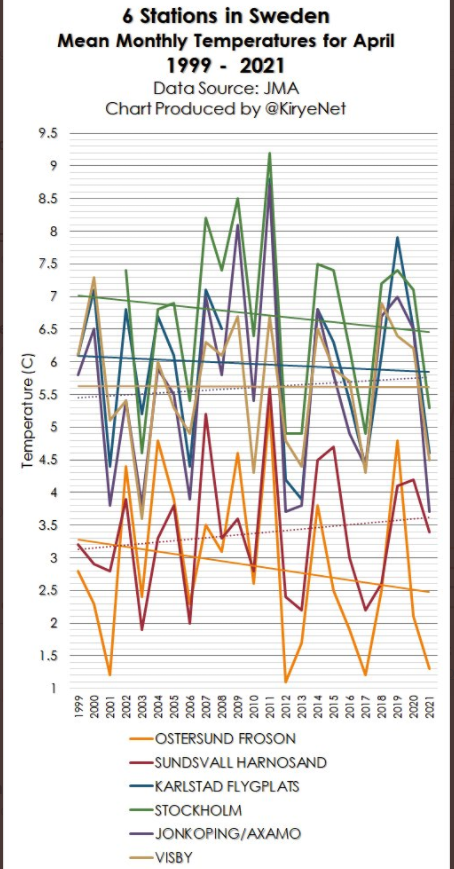 Someone might want to tell Greta that 4 of 6 stations in Sweden have seen NO WARMING in April since 1999.

Globe colder than when Greta was born (2003)

Even more significant, the globe has cooled considerably, by 0.75°C since the El Nino peak in 2016.

Some countries have been rushing implement measures that they think will curb warming. Maybe the rush is all about the lack of warming and that this is becoming further evident.