Drought monitoring charts from Germany’s Helmholtz Center for Environmental Research (UFZ) are beginning to raise eyebrows as they continue to show now rain-soaked Germany as still being under “severe or exceptional drought conditions”. 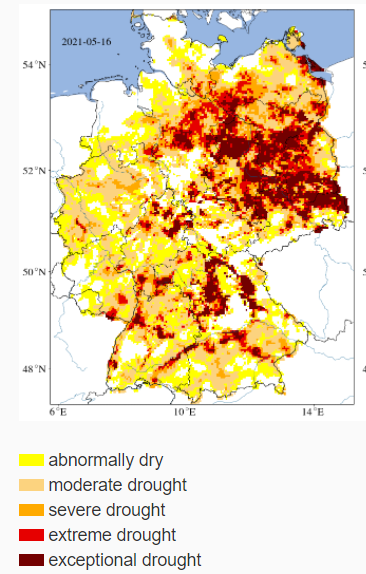 it turns out that the UFZ uses model simulations to make its drought intensity determinations – and not actual soil measurements.

Much of Europe indeed saw unusually dry conditions the past three summers, and water levels at lakes, rivers and reservoirs indeed dropped to unusually low levels. But the rains have since returned over the past weeks and just recently the first flood warnings were issued again.

Yet, the UFZ charts continue to show that much of Germany remains in the midst of “severe or exceptional drought”.

Marcell Oberfeld at Facebook posted that according to the UFZ, the topsoil down to 25 cm still shows “severe drought” in his own region. In response he wrote:

One could think that there has been a gradual decrease in dryness because of much precipitation. Looking at the [UFZ] animation since one year, you can see that the coloring reacts relatively fast, but really we never gets out of the drought – especially at the depth of 1.80m.”

The UFZ charts the soil moisture index up to a depth of about 1.80 meters and defines drought as a deviation from the long-term expected value – estimated in a so-called percentile approach. To calculate drought severity, the UFZ uses a 30-day average “to achieve statistical stability”.

Concerning how the mean and deviations are measured, the UFZ writes (emphasis added):

The scientific base underlying the UFZ Drought Monitor is the hydrological model system mHM (Samaniego et al. 2010, Kumar et al. 2013),  which was developed at the UFZ. This “smart” environmental system model is able to mathematically describe ecosystem processes on a landscape-scale and works not only with an extremely good spatial resolution and with high precision but also integrates uncertainties in prediction into its calculations. The model system is not only deployed in the UFZ Drought Monitor but also, to name two examples, in the Earth system models of the US-based National Center for Atmospheric Research (NCAR) and in the water quality models of the University of Waterloo in Canada.”

The UFZ, which commits itself to “an open and diverse society in which we can learn from one another”, adds:

The Drought Monitor is updated every night using data from around 2500 weather stations operated by the German Meteorological Service (DWD). These data are used to drive the mHM hydrological model that simulates soil moisture and other parameters. By comparing the soil moisture with the value expected from long-term data, it is possible to calculate the soil moisture index  (SMI, Samaniego et al. 2013) and determine the drought status.”

In other words: nothing that is calculated and estimated using model simulations are actually measured at all, says Oberfeld at Facebook.

So with lakes, rivers, reservoirs streams now at good levels, it seems the UFZ model methods are maybe about keeping the alarm level high, Oberfeld adds.

So this spring is really anything but dry.
Our Edersee here has just overflowed. This does not happen every year…
I strongly suspect the usual manipulation at work.”

The zone where I live is yellow, so it should be dry near the surface.
But it is not. In our area trees and bushes are lush green. In the nearby forest, water is everywhere in the drainage ditches. I don’t see any problem. Everything is normal.”

Doing what fits the narrative?

The Bavarian Bureau of Forest and Forest Management also wrote of the UFZ’s Drought Monitor “discrepancy”, which likely has to do with “an ambiguity in the term ‘drought’ (Zimmermann et al. 2020)”. The Bavarian LVF commented (emphasis added) in its summary:

However, the UFZ drought monitor shows drought only as a purely statistical parameter as a deviation of a current moisture condition in the soil from a long-term average and thus has no direct impact relation to drought stress for trees. Statements on the water supply of the forests are thus hardly possible, especially in the winter half-year.”

The following side-by-side charts show the large discrepancy seen in Bavaria (southeast Germany) between the UFZ and the LVF: 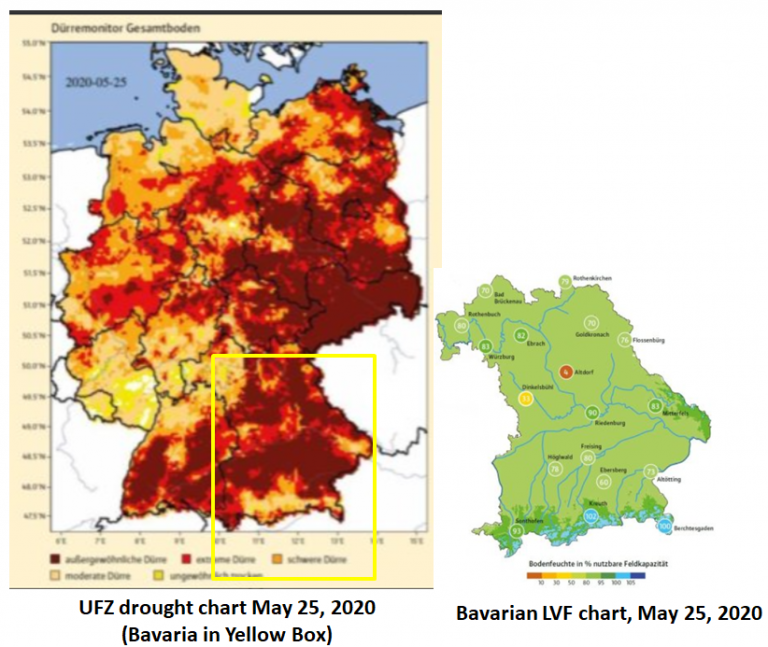 In short, without implying malice, the UFZ Drought Monitor is doing what fits the narrative, keeping the alarm high.
It may be true that the soils have not yet regenerated but this kind of representation even though it has been cool and raining for months provides a distorted picture. As also stated in the text above, especially in the winter half year the simulation is not meaningful.”