“Another hot day in the forecast for Bern, Switzerland, today. Meteorologists have issued another heat warning as temperatures are expected to average 25°C in Bern today. Authorities advise people to stay indoors and to drink plenty of fluids.”

This is what weather forecasts in Switzerland may sound like very soon as the country goes full Orwellian. 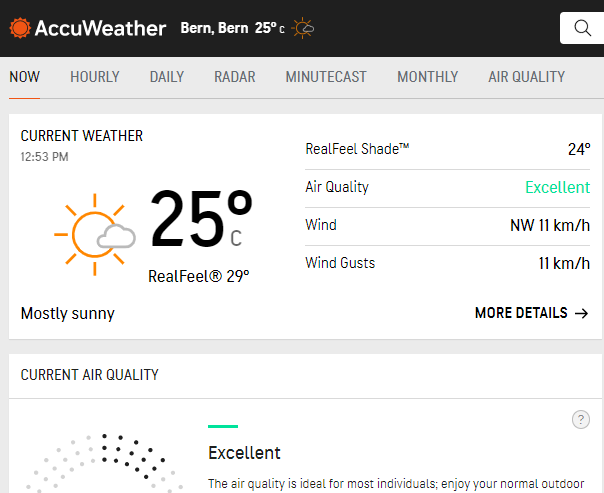 25°C is dangerous heat, Swiss authorities say. People in Bern need to be careful today as the temperature has reached 25°C. Image cropped from accuweather.com.

A daily average of 25°C, i.e. about room temperature, is now considered in Switzerland high enough to issue a “heat warning”.

Alex Baur at Weltwoche here reports that the Swiss government “has lowered the minimum temperature” for issuing “heat alerts”.

“The ‘Federal Office of Meteorology and Climatology‘ now issues a heat warning as soon as the daily average temperature reaches 25 degrees,” reports Baur. “The daily alert is meant to remind us of climate change.”

Danger: you may have to put on shorts and a t-shirt

Applying the new Swiss standard, Baur notes sarcastically that traveling to the Mediterranean this summer, where the thermometer regularly rises above 30 degrees, now means putting your “health at risk”, never mind people living in the tropics are “in a death zone”.

Though cold kills far more people than heat does, authorities would never get the idea to issue a cold warning for a daily mean of 5°C.

It seems that in their minds, hikers would be in far greater danger getting lost in the shade of a forest at 25°C than they would at a temperature of 5°C in the rain.

The Swiss move sounds all a bit preposterous.

“Beating climate change into our heads”

“According to a Lancet study, the cold kills ten times more people worldwide than the heat, so it is much more threatening. But of course that’s not a topic in the news, Baur writes. “After all, it’s all about beating climate change into our heads.”

Granted that a high of 31°C and a low of 20°C is a warm day (average 25.5°C), it seems absurd to declare it a health risk – especially when we know a majority of the world’s population lives under such conditions because they feel it is ideal to do so.