A study of Czech extreme weather fatalities show that the trend has been “significantly falling”. Most weather extreme fatalities were related to cold…less than 2% “heat related”!

German climate site Die kalte Sonne reports on on new study that looked at fatalities due to weather extremes in the European landlocked country of the Czech Republic.

Let’s recall how climate alarmists claim the number of fatalities due to extreme weather from global warming will rise rapidly and that mankind now even faces “an existential threat”.  But it isn’t so, a new study finds.

In the newly released study appearing in the journal Natural Hazards Earth Systems Science authored by Rudolf Brázdil et al., the researchers made an analysis of fatalities attributable to weather conditions in the Czech Republic during the 2000–2019 period.

The analysis was performed for floods, windstorms, convective storms, rain, snow, glaze ice, frost, heat, and fog. For each of them, the associated fatalities were investigated in terms of annual frequencies, trends, annual variation, spatial distribution, cause, type, place, and time as well as the sex, age, and behavior of casualties.

The study found there were 1164 weather-related fatalities during the 2000–2019 study period, exhibiting a statistically significant falling trend. Those attributable to frost (31%) predominated, followed by glaze ice, rain, and snow.

Fatalities were at their maximum in January and December.

The minimum number happened in April and September. Fatalities arising out of vehicle accidents (48%) followed by freezing or hypothermia (30%). Most deaths occurred during the night., when it’s colder than in the daytime.  Adults (65%) and males (72%) accounted for the majority of fatalities.

The study had another surprising result: cold weather deaths rose!

“According to the database of the Czech Statistical Office, deaths caused by exposure to excessive natural cold are markedly predominant among five selected groups of weather-related fatalities, and their numbers exhibit a statistically significant rise during 2000–2019,” the study’s authors found.

Only 20 fatalities in the Czech Republic were attributed to heat (heat waves) during the 2000–2019 period, an average of 1 fatality a year. Nine such cases were recorded in 2006,…” 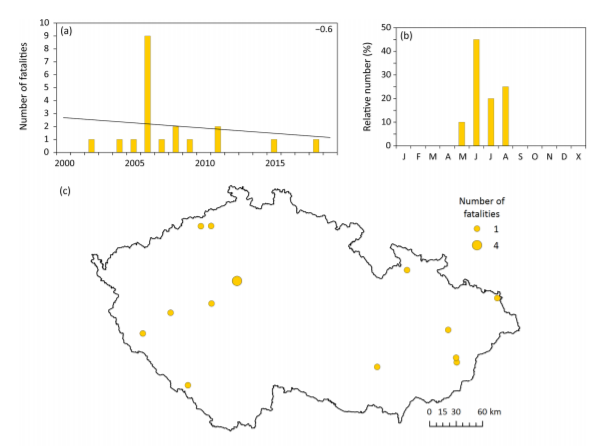 Only 2 heat deaths in the last decade. Shown above are the heat-related fatalities in the Czech Republic during the 2000–2019 period. Chart: Rudolf Brázdil et al. (2021).

To all the warming alarmists: Heat is not the problem, stupid.