Harsh criticism of German authorities failing to act is mounting in the aftermath of the recent deadly floods.

Many of the over one hundred people who died in the recent flood disaster in Central Western Germany could have been prevented – had the responsible institutions heeded the warnings that had been already issued days in advance by the weather services.

Veteran meteorologist: “much could have been prevented”

“The rainfall could not have been prevented” but the authorities and the “media could have warned the population.” The veteran Swiss meteorologist is surprised by the “surprise of the authorities” and says “people could have been evacuated or at least items moved to higher floors”.

Kachelman also commented to Germany’s leading national daily, Bild: “It hurts when the very people who would have the resources to accompany such a weather situation 24/7 do nothing to save lives. But they broadcast shit and let people drown.”

Publicist Roland Tichy at tichyseinblick.de commented on what seems to be a state of permanent paralysis among the authorities: “Those who blame the flood disaster on the climate are arguing cynically: It is a matter of concrete responsibility and concrete measures and solutions. And so every weather hits Germany unprepared.”

Already on Friday, a heavy precipitation event was announced in western Germany. The weather models swung so strongly that one could already speak of severe weather due to heavy rain. By Monday at the latest, it must have been clear to everyone that there would be flooding in western Germany.”

The European EFAS flood warning system had even issued a warning of ‘extreme flooding.’ The fact that so many people still had to die was ‘a monumental system failure,’ British hydrologist Hannah Cloke, an EU Commission adviser on EFAS, told the political magazine Politico.”

Belgium and the Netherlands both evacuated citizens.

Meanwhile science editor Axel Bojanowski at “Welt” commented on claims that the flood was caused by German CO2 emissions: “The climate argument is used by politicians to deflect attention from their own responsibility for a disaster. Records show flash floods are less dangerous than before despite climate change.”

Building in a natural flood zone!

Another suspected problem not getting the needed attention is reckless planning and zoning. At Twitter, Stefan S. astutely noted that the hard hit town of Altenau in Rhineland Palatinate appears to have been built on an area that is a natural flood area of the Ahr River, satellite photos suggest:

Another major factor contributing to flash flooding is the amount of Germany’s surface area that is made impervious (paved over). A total of 19,743 km² (5.5%) of the country’s surface area is paved.

The recent German floods turned out to be where Germany is the most paved over, as the following chart shows. The colors shows the degree to which the surface is paved over: 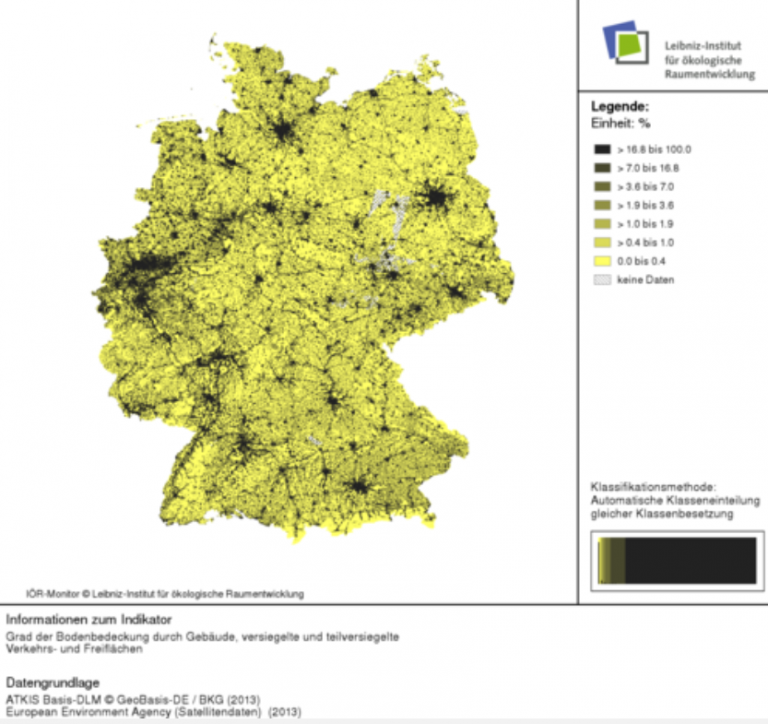 Finally, climate alarmists like insisting that flooding today is far worse than before CO2 emissions reached higher levels (350+ppm). But of course this is nonsense. The 30 most deadly floods in the last 1000 years all occurred before 1980: