A new study suggests British Columbia (Canada) relative sea levels remained 10 meters higher than they are today until they fell to their present levels in the last ~1800 years. Two other new studies suggest sea levels were still 0.8 to 1 meter higher than today during the Medieval Warm Period.

After the peak of the last glacial about 20,000 years ago, relative sea levels subsequently rose from 120 meters below modern sea levels to heights of 90 meters above today’s by ~14,500 years ago in the Douglas Channel near British Columbia, Canada (Letham et al., 2021).

“We determine that central Douglas Channel was ice-free following the Last Glacial Maximum by ∼14,500 BP and RSL was at least 90 m higher than today. Isostatic rebound caused RSL to fall to 21 m asl by 11,500 BP, though there may have been a glacial re-advance that would have paused RSL fall around the beginning of the Younger Dryas. RSL fell to 10–15 m asl by 10,000 BP, and continued to drop at a slower rate towards its current position, which it reached by ∼1800 years ago.” 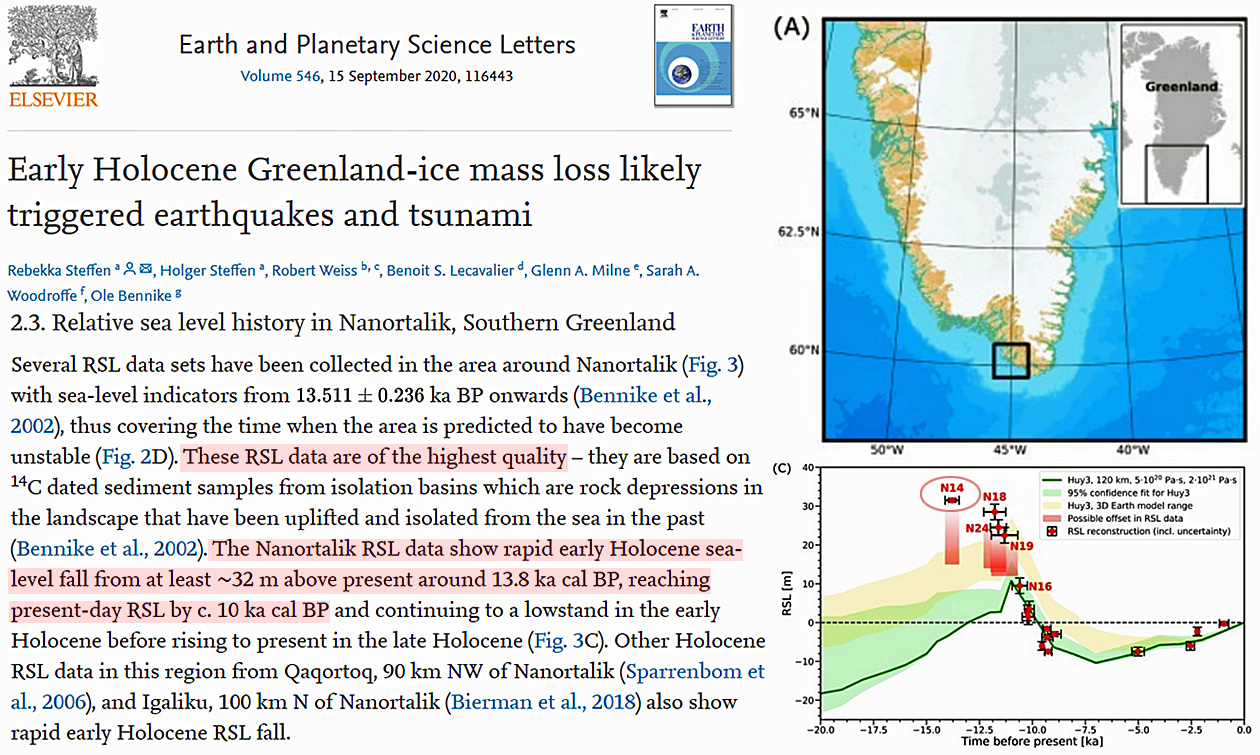 Sea levels were reportedly about 40 meters higher than today 15,000 years ago along the coasts of western Norway (Bondevik et al., 2019). 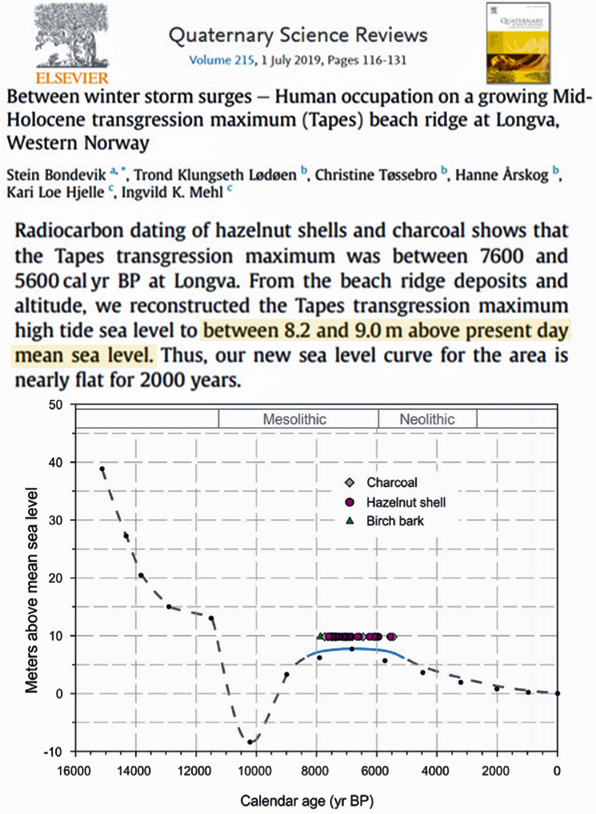 For the Southern Hemisphere, a 2011 study (Watcham et al.) reported Antarctica’s sea levels were at least 15 meters above today’s 9000 years ago. Falling sea levels have been ongoing since then, with an especially pronounced acceleration in declining sea levels in the last 500 years. 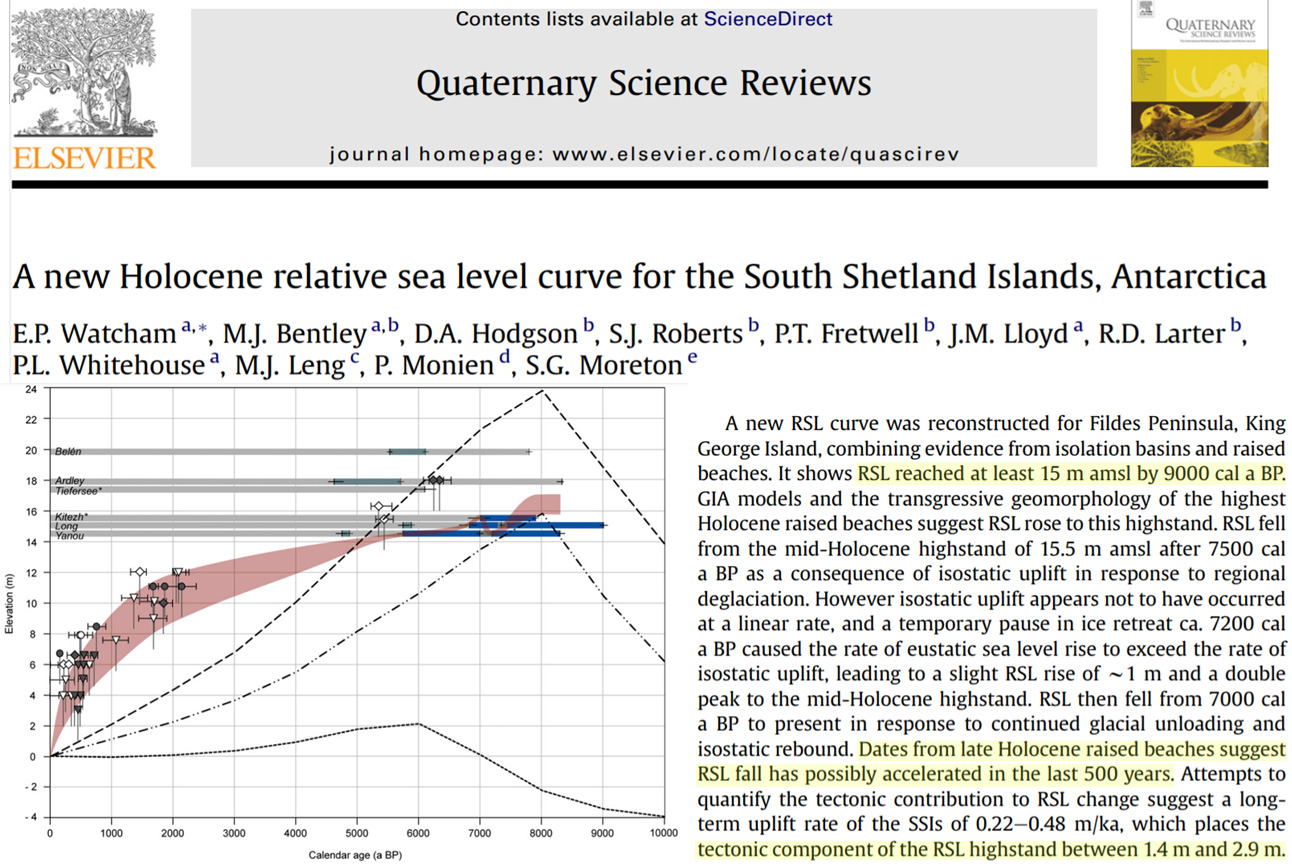 Two more new studies indicate the relative sea levels along the coasts of Bangladesh (Haque and Hoyanagi, 2021) and South China Sea (Yan et al., 2021) were still about 0.8 to 1.2 meters higher than today’s during the Medieval Warm Period.

None of these studies have sea level trajectories that even remotely align with changes in the atmospheric CO2 concentration that ranged from 230 ppm 14,500 years ago to 270 ppm during the Medieval Warm Period.

“This study illustrates the influences of sea-level on the depositional process during the last 1000 years of the southwestern delta, Bangladesh. … During the 850–1300 AD, RSL [relative sea level] was reached up to +80 cm higher than the present level where tidal-influenced bioturbated light yellow to gray mud deposited in the upper delta plain area. RSL was dropped up to −110 cm during 1300–1850 AD.”

“Beachrock is considered a good archive for past sea-levels because of its unique formation position (intertidal zone). To evaluate sea-level history in the northern South China Sea, three well-preserved beachrock outcrops (Beigang, Gongshanbei, and Hengling) at Weizhou Island, northern South China Sea were selected to examine their relative elevation, sedimentological, mineralogical, and geochemical characteristics. Acropora branches with well-preserved surface micro-structures were selected from the beachrocks and used to determine the ages of these beachrocks via U-series dating. The results show that the beachrocks are composed of coral reef sediments, terrigenous clastics, volcanic clastics, and various calcite cements. These sediments accumulated in the intertidal zone of Weizhou Island were then cemented in a meteoric water environment. The U-series ages of beachrocks from Beigang, Gongshanbei, and Hengling are 1712–768 ca. BP, 1766–1070 ca. BP, and 1493–604 ca. BP (before 1950 AD) respectively. Their elevations are 0.91–1.16 m, 0.95–1.24 m, and 0.82–1.17 m higher than the modern homologous sedimentary zones, respectively. Therefore, we concluded that the sea-level in the Meghalayan age (1766–604 ca. BP) was 0.82–1.24 m higher than the present, and that the sea-level over this period showed a declining trend.”