According to the latest IPCC Assessment Report 6 (AR6), the observed temperature increase and the calculated temperature increase according to climate models have been almost the same 1.3 °C from 1750 to 2020.  The report shows a strong positive trend in solar shortwave radiation from 9/2000 to  6/2017, but its impact has been omitted in post-2000 warming calculations which explains the high temperatures since El Nino of 2015-2016.

For example, the temperature effect in 2019 is about 0.7 °C according to the AR6 science. Actually, the IPCC models give a 2019 temperature increase of 2.0°C (1.3°C + 0.7°C). This 54 percent error is due to the positive water feedback applied in climate models, which doubles the impact of other climate forcings and which, according to this natural experiment by climate, does not exist.

The amount of carbon dioxide in the atmosphere has increased by 32% since 1750. According to the AR6, this is only due to man-made anthropogenic emissions staying there (remain, accumulate) by an average of 44% per year and the rest has been absorbed by oceans and vegetation.

The AR6 report no longer shows the IPCC’s very own definition of the greenhouse effect, except in the glossary. The definition no longer contains the description for how greenhouse gas absorption of 158 Wm-2, which causes the greenhouse effect, creates downward infrared radiation downwards on the ground of 342 Wm-2. This is against fundamental physical laws because energy comes from nothing. The radiation to the surface consists of four energy fluxes, which according to the IPCC’s energy balance are: greenhouse gas absorption of 158 Wm-2, latent water heat 82 Wm-2, sensible heat (warm air) 21 Wm-2, and solar radiation absorption in the atmosphere 80 Wm-2. The three firstly mentioned energy fluxes totaling 261 Wm-2 maintain the greenhouse effect.

The IPCC’s science as the basis on climate change in the Paris Agreement gives a strongly exaggerated warming capability to carbon dioxide. In 2019, the limit of 2 degrees was already exceeded according to the IPCC’s climate models. 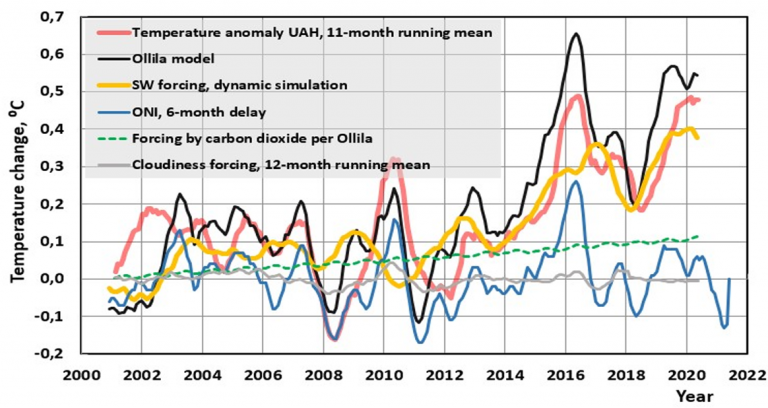