Politicians, scientists of all disciplines, the media and big money tell us CO2 acts as a “greenhouse gas” trapping heat inside the atmosphere and that the consequence will be a runaway global warming if we do not stop the burning of any type of fossil fuel within the next 20-30 years.

But scientists may have ignored another major factor, and it is huge. 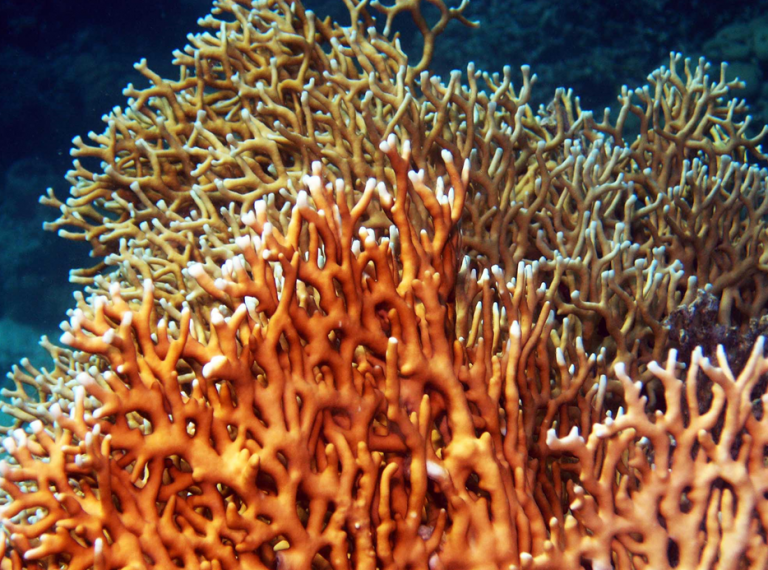 It is claimed that earth’s “natural” pre-industrial atmospheric CO2 concentration had been hovering at 280 parts per million (ppm) for at least several hundred thousand years. Since the start of industrialization some 200 years ago, human-driven CO2 emissions have raised that level to 413.63 ppm (as of Sep. 29, 2021 (1)). In order to avert disaster – a global temperature rise of more than 1.5 °C –, mankind should not release more than 336 additional gigatons of CO2  into the atmosphere.

This 366 Gt figure has been used as the base for a ruling by the German Federal Constitutional Court (2). Adherence to this ruling will imply absolutely drastic restrictions on normal life in Germany: Electricity, heating, warm water, ground and air travel, steel, aluminum and concrete production would have to cease or at least be restricted by up to 80-90 percent. See also the climate planning targets for the city of Oxford (3). Ultimately, the majority of all industrial and private activities would be brought to a near standstill. In other words: Goodbye, civilization as we knew it, and back to the level of the Amish people.

But is this collapse really inevitable? Let’s check a few facts.

How sound are the basic assumptions?

The fundamental hypothesis of the apologists of man-induced catastrophic climate change is that on earth we had a more or less closed-loop carbon cycle that had been stable for at least several hundred thousand if not millions of years, Image 2. 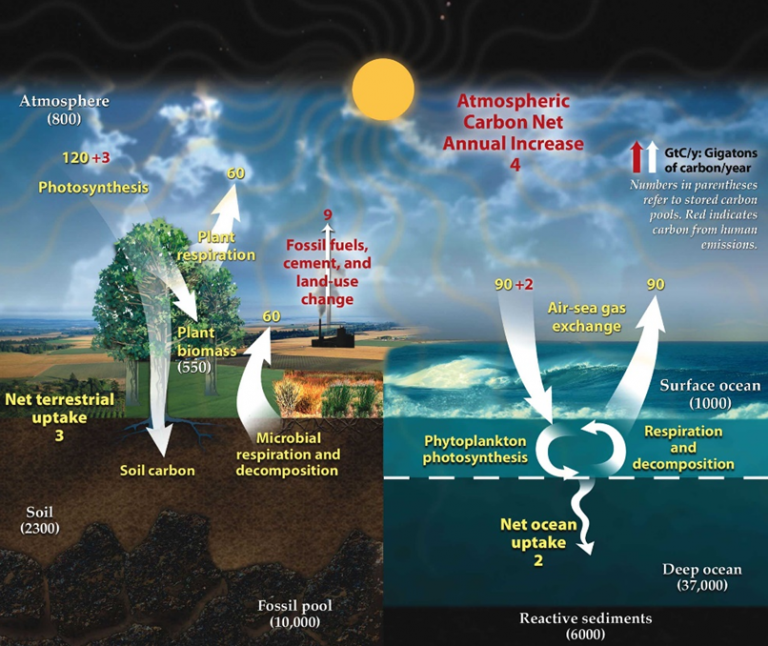 Image 2 illustrates the underlying assumptions. It largely corresponds to the more detailed Figure 6.1 of the IPCC AR 5 report (5), which cannot be shown here due to copyright restrictions. The assumption is that clearly defined amounts of carbon are stored in a number of main pools or reservoirs (atmosphere, oceans, soil, fossil fuels etc.). Due to natural processes, these pools exchange carbon-containing fluxes.

What strikes at first glance is that there are imbalances: The figures show a resulting long-term depletion of the atmosphere by a combined 5 Gt Carbon (GtC) per year. According to Image 2, the atmospheric reservoir would be depleted in a time span of just a few hundred years were it not for human CO2 additions of at least 5 GtC annually. Sadly, without at least about 200 ppm CO2 in the air, photosynthesis and thus oxygen-breathing life on earth would not be possible.

Looking at the countless billions in funding that climate research has received during the past decades, this inconsistency is a bit puzzling. Would life on earth really be doomed in the medium term without the addition of at least 5 GtC/yr of fossil fuel generated CO2 to our atmosphere? But there are other figures that merit our attention.

CO2 absorption in the upper ocean levels is ignored?

Looking at Image 2, a fact that strikes us is that no CO2 sequestration is accounted for within the surface ocean. In this area, a perfect balance of internal fluxes is assumed. The surplus of 2 GtC/yr from the exchange with the atmosphere is simply passed on to the deeper layers of the ocean, where is supposed to remain, a seemingly insignificant addition to the already massive inventory of 37,000 GtC stored in these waters.

Other CO2 sequestration is ignored

There’s yet another peculiarity that should irk one’s mind when looking at the supposedly balanced CO2 fluxes in the near-surface oceans. On land, trees absorb CO2 and use the carbon to form wood. This carbon ends up in soil or even coal for long time periods. In the oceans, algae and other plants also absorb CO2 and incorporate carbon in their bodies, but the decay after death releases this carbon as CO2 back into nature.

Additionally, there is a further path that builds on the photosynthesis of marine organisms. It consists of corals, predatory shell-building marine creatures, which feed on algae and organic detritus. Using the carbon from this food, oxygen from their respiration and calcium atoms from the seawater, they build solid outer skeletons consisting of CaCO3, in other words limestone. After their demise, their limestone shells do not dissolve. They accumulate and are sort of sintered together by new corals rooting on top of their ancestor’s remains until they form fairly solid coral reefs. In these reefs, the carbon initially made available from CO2 by photosynthesis is tucked away in a very durable form that remains stable for hundreds of millions of years. Why have the scientists, who preach to us the imminent catastrophe caused by the release of CO2 “greenhouse gas” seemingly overlooked such a biogeochemical mechanism for long-lasting CO2 sequestration taking place in the surface layer of our oceans? Do they deem it too insignificant to merit any attention?

As already mentioned, this coral growth has been going on over immense timescales, as documented by the tremendous amounts of limestone all over the world. And as our climate pundits constantly point out, global warming – which in reality has been going on since  the end of the last ice age some 12,000 years ago (6) – has caused glaciers to melt and sea levels to rise. The latest prediction of the US National Atmospheric and Oceanic Administration (NOAA) claims a yearly sea level rise of 3,2 mm (7). Since the end of the last ice age began to thaw, sea levels have thus risen by about 120 meters. Coral reefs have kept pace with that rise, adding these 120 meters to their initial height, see Image 3: 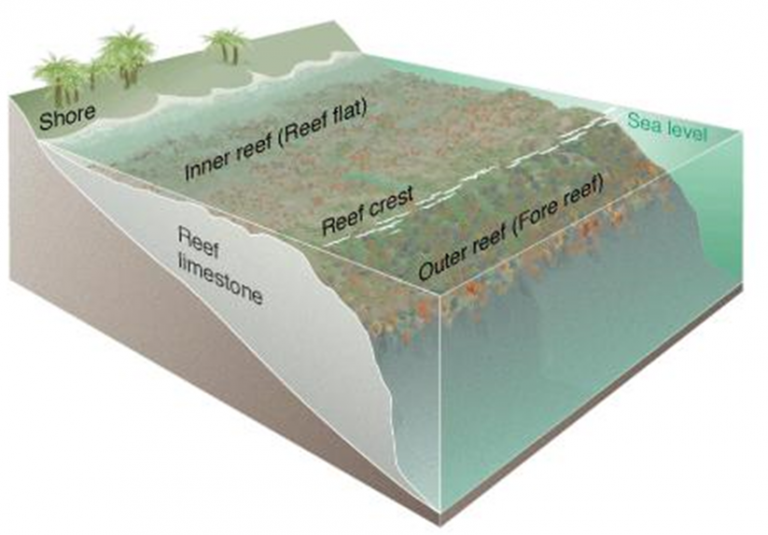 Instead of just rising vertically, some may rather have “crawled up” the flanks of continental sockets, but in the process, they have nevertheless left behind an oblique rock structure whose mass will more or less match that of a vertical growth path. Fringing reefs around sinking volcanoes later form lagoons that are also filled with limestone, Image 4: 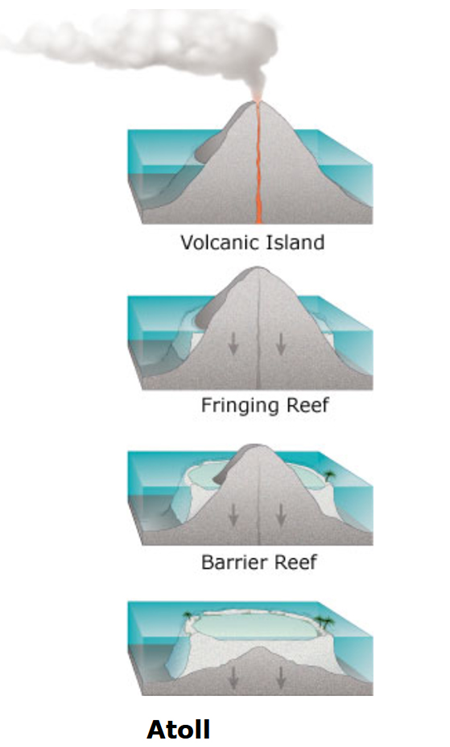 Image 4. Growing corals have built up an atoll around a disappearing volcano, including its lagoon (8) (Graphic: USGS, public domain)

As a matter of fact, tropical island nations located on coral islands will rarely be threatened by rising sea levels. The islands they live on have all managed to keep pace with even a 120 meter rise of sea levels during since the last ice began to thaw. Otherwise they wouldn’t be here nowadays. This growth will continue, unless the inhabitants mismanage the protection of the coral habitats they depend upon.

The interesting question now is how much carbon did these creatures to absorb from their environment in order to achieve these exploits? When trying to assess the amount of material that is needed to raise a coral reef, a few assumptions have to be made. The top of a reef is a highly variable structure with rather low density. But in order to raise the reef, one has to build up its base. This consists of the skeletal remains of dead corals that have been shattered and partly reduced to sand. These eventually “sinter” together to form a fairly solid rock base for the living coral thriving on flanks and top. Whatever addition to the height of the reef might be made, the rocky base will have to keep pace with it. In order to assess the amount of material required for this achievement, we have to look at the composition of this rock. It consists of calcite (CaCO3). Massive calcite has densities between 2.6 – 2.8 kg/dm3, with a median value of 2.715 kg/dm3. However, even compacted coral base rock still has voids and orifices. For good measure, let’s assume a density of 2 kg/dm3.

The next point to clarify is the weight percentage of the carbon contained in this rock. This can be easily determined looking at its chemical composition. The molecular mass of CaCO3 is 100 (Ca = 40, 3 x O = 48, C = 12). The mass percentage of carbon in this base rock is thus 12%.

We have thus identified a very efficient biogeochemical mechanism that dealt with additional CO2 injected into the earth’s carbon cycle. And this mechanism seems to have been ignored by what is presented to the public as the result of cutting-edge research in the field of climate change (10).

Mankind is accused of having disturbed the earth carbon balance by adding some 260 GtC. What explanation is put forward by “climate science” with respect to the source of the whopping 11,700 GtC that have been dealt with by simple shell-clad detritus-gobblers building up their reefs during the last 12,000 years? We are constantly called on to “follow the science” of climate change. But how well does this science match with the realities we find in nature?