German climate site Die kalte Sonne here looks at whether Greenland is really melting faster or not in its 78th climate and energy video (3rd segment).

Satellite measurement has allowed accurate measurements over the years and so reliable trends are detectable.

Greenland has added mass since July

Over the past year, since September 2020, Greenland has seen a number of heavy snowfalls, as depicted by the solid blue line in the chart by the Danish polarportal.dk: 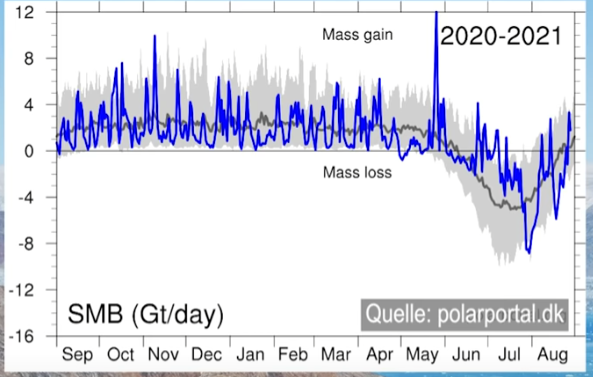 When looking at the net gain or loss in billions of tonnes, we see a net gain since July (blue curve): 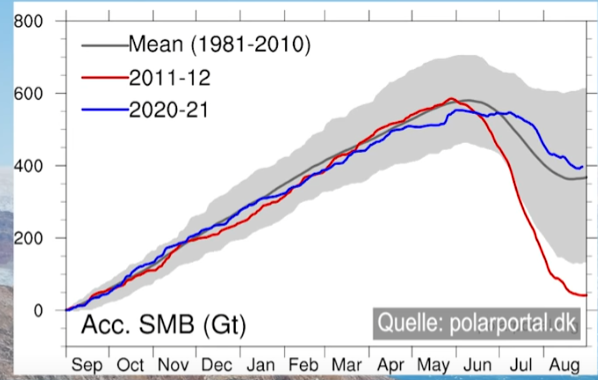 The last months stand in stark contrast compared to the large net loss seen in 2012, depicted by the red curve.

Another important aspect of Greenland ice mass change are the data measurements of the ice edge and calving rates, in addition to the surface mass variations. Each year the Danish Polar Portal reports the sum both of these factors. “This determines whether Greenland ice is growing or shrinking,” says Die kalte Sonne.

The following chart plots the total mass balance changes since 1985: 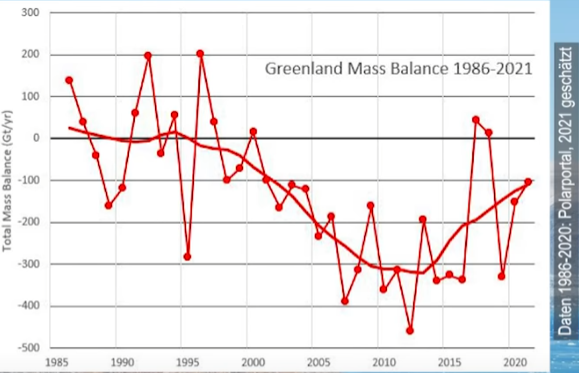 Greenland ice mass change bottomed out in 2012, and has been seeing less and less loss for 15 years. Each year mass loss has been declining.

Currently Greenland mass balance change is at levels seen in 2000. The days of rapid mass loss are behind us, at least for now. The year 2021 is expected to come in at -100 gigatonnes. In 2017 and 2018 mass was actually added.

When it comes to Greenland ice mass, Die kalte Sonne summarizes: “The usual media narrative of an alleged increasingly rapid ice melt in Greenland is thus not correct.”