Cooling October trend. And read below why Europe maybe facing a winter from hell.

Global warming is supposed to mean warmer autumns and milder winters, and thus we should expect a warming trend for October.

Today we look at the latest October data now available from the Japan Meteorology Agency (JMA) for France, and Ireland.

20 years of October data in France

First we plot the mean temperature data for the 14 surface stations in France for which the JMA has sufficient (untampered) data – going back to 2000:

As the above chart shows, 8 of the 14 stations plotted show no warming or cooling for October. Like in other regions over the northern hemisphere, autumn in France appears not to have warmed at all since 2000.

Next we plot the October mean temperature for the stations in Ireland going back 26 years, also for which the JMA has sufficient data.

Due to its location in the Northeast Atlantic and its rural characteristics, Ireland so can tell us what’s really happening: 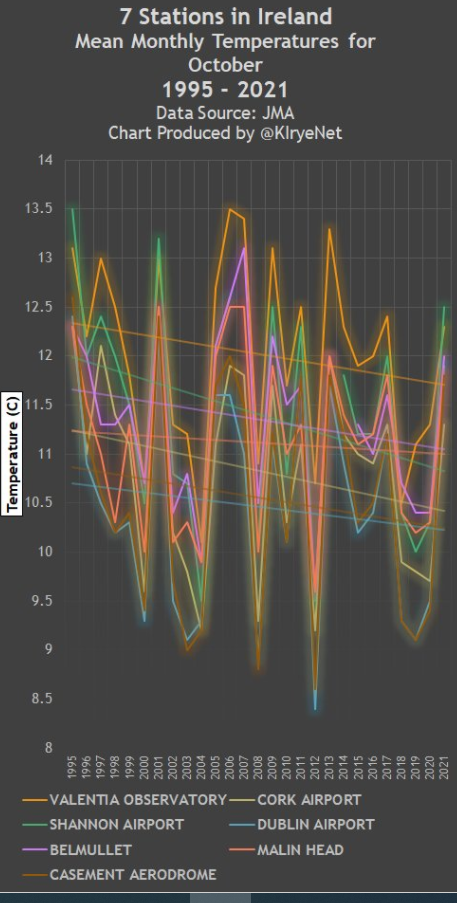 All seven stations in Ireland show cooling or almost flat trends. None have been warming in October.

Unless leaders get real with the energy supply problems. Europeans could be looking at a winter from hell.

Temperatures are set to drop starting across Europe next week as a high pressure system could also bring colder air flows over central and southern Europe by the end of the month, according to meteorological simulations.

“The region will be particularly sensitive to cold snaps in the coming months, with gas prices up for a second week after surging to records in October,” reports World Oil here. “The arrival of cold weather in Europe would follow freezing temperatures and snow in China, the world’s biggest energy consumer. Higher heating demand could intensify the already fierce battle for liquefied natural gas cargoes, with prices for flexible U.S. LNG still more attractive in Asia.”