Austria: Law amendment foresees up to one year in prison for vaccine critics

Austria’s online Express.at here reports on the law against vaccination opponents, set to go into force in early 2022.

The fine for not complying to the vaccine mandate has been reduced to €2000 instead of €7200. That is quite a bit softer, but the new law has a new amendment against vaccination opponents, which the Express reports “is explosive in terms of democratic politics: in future, vaccination critics in Austria will be threatened with one year’s imprisonment.”

The Express adds: “The amendment has already passed the parliamentary committee. The vaccination critics will have their own detention rooms, and the costs for meals will be charged to ‘the obligated’.”

Holy moly! The politicians in Austria have gone totally bonkers.

Meanwhile, Germany’s Paul Ehrlich Institute data shows that vaccine related deaths in the country have exploded some 100-fold in 2021: 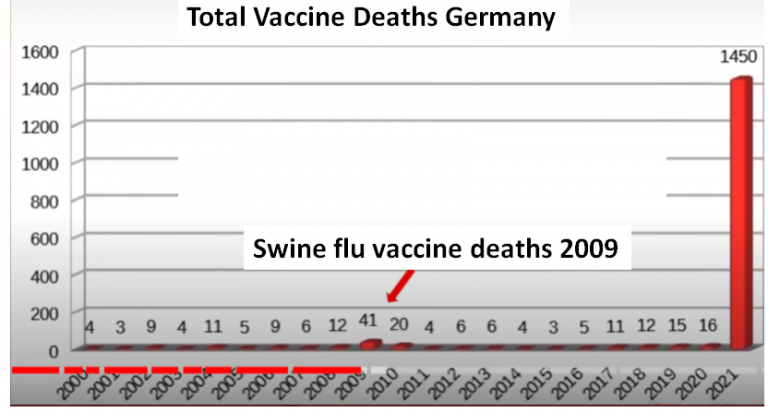 In most years, less than a dozen vaccine deaths occurred. But in 2009, 40 deaths linked to the swine flu vaccine occurred. As a result, the vaccine was immediately suspended that year. In 2021, a whopping 1450 deaths were reported as of August. But the vaccine continues to be vigorously encouraged and in some countries mandates are planned with boosters possibly every year if not semiannually!

Yet in Austria, you could go to jail for a year for expressing such facts. Europe is going down the path of insanity at warp speed.