Scientists: Due to the decline in solar geomagnetic activity the Earth is poised to endure a cooling period over the coming decades, with the coldest temperatures arriving by 2038 or 2039 ±11 years.

Human greenhouse gas emissions are not likely the cause of recent temperature changes; geomagnetic activity is. Nor will greenhouse gases reverse the effects of the predicted cooling.

The cooling will amount to about 1.3°C lower temperatures in the next few decades, then gradually increasing temperatures to 2100, when it will be 0.5°C colder than 2018.

To boot, the authors point out that the Medieval Warm Period had 0.5°C warmer global-scale temperatures than today. 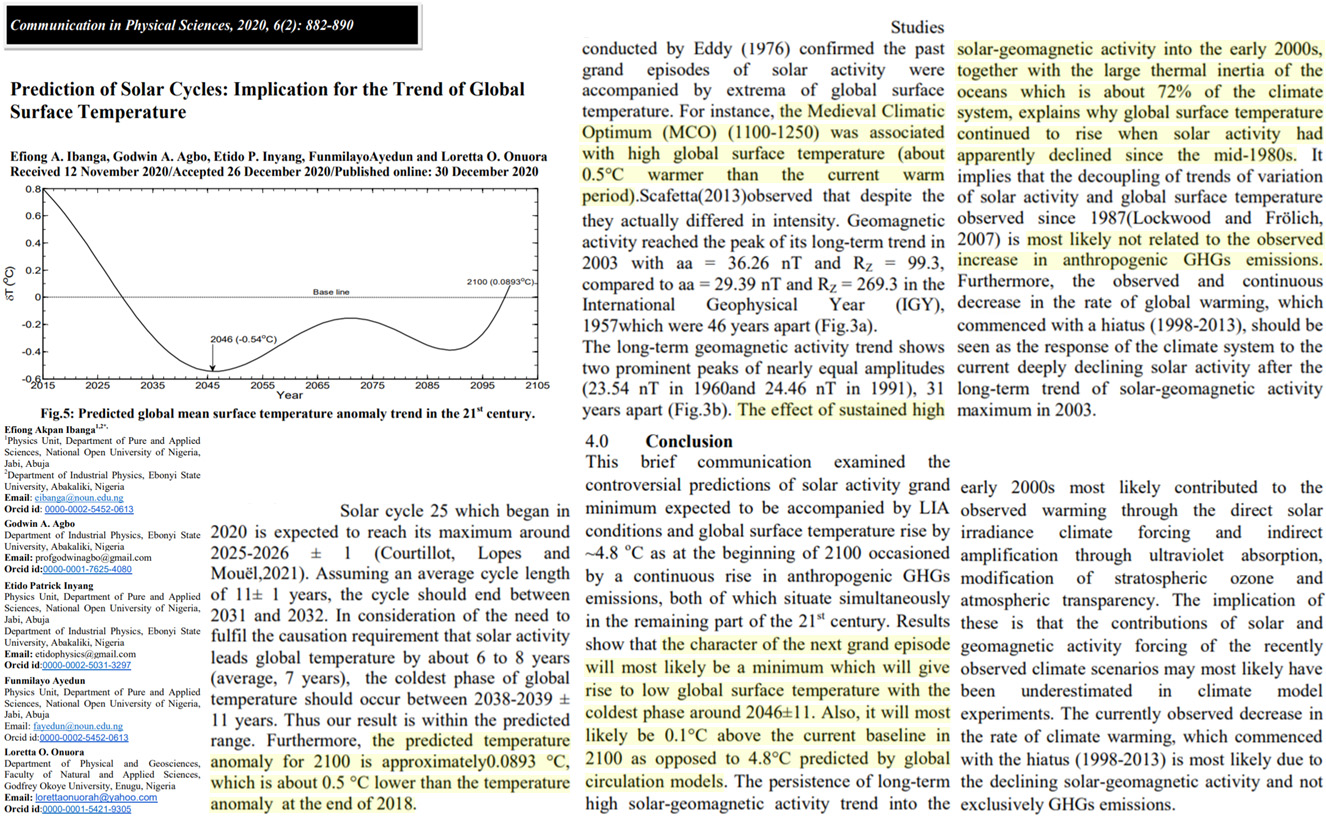 “For instance, the Medieval Climatic Optimum (MCO) (1100-1250) was with high global surface temperature (about 0.5°C warmer than the current warm period).”

“The effect of sustained high solar-geomagnetic activity into the early 2000s, together with the large thermal inertia of the oceans which is about 72% of the climate system, explains why global surface temperature continued to rise when solar activity had apparently declined since the mid-1980s. It implies that the decoupling of trends of variation of solar activity and global surface temperature observed since 1987 (Lockwood and Frölich, 2007) is most likely not related to the observed increase in anthropogenic GHGs emissions. Furthermore, the observed and continuous decrease in the rate of global warming, which commenced with a hiatus (1998-2013), should be seen as the response of the climate system to current deeply declining solar activity after the long-term trend of solar-geomagnetic activity maximum in 2003.”

“Solar cycle 25 which began in 2020 is expected to reach its maximum around 2025-2026 ± 1 (Courtillot, Lopes and Mouël,2021). Assuming an average cycle length of 11± 1 years, the cycle should end between 2031 and 2032. In consideration of the need to fulfil the causation requirement that solar activity leads global temperature by about 6 to 8 years (average, 7 years), the coldest phase of global temperature should occur between 2038-2039 ±11 years. Thus our result is within the predicted range. Furthermore, the predicted temperature anomaly for 2100 is approximately 0.0893 °C, which is about 0.5 °C lower than the temperature anomaly at the end of 2018.”