Scientists find that on average, motion of continents is currently upward.

The study examined the rates and patterns of vertical land motion (VLM) on all locations on Earth’s land surface using GPS imaging. The team estimated the VLM at all tide gauges. The authors were able to make a global assessment of the budget of uplift and subsidence attributable to glacial isostatic adjustment (GIA) and non-GIA sources and provide maps and rates at over 2,300 tide gauges around the world.

The results led the authors to conclude that the surface motion of the continents is on average upward, implying that the unobserved areas (composed of the ocean basins and ice-covered areas) move on average downward with respect to Earth center.

However, after correcting for the GIA the reverse is true, and observed areas subside on average implying that the unobserved areas undergo net non-GIA-related uplift. 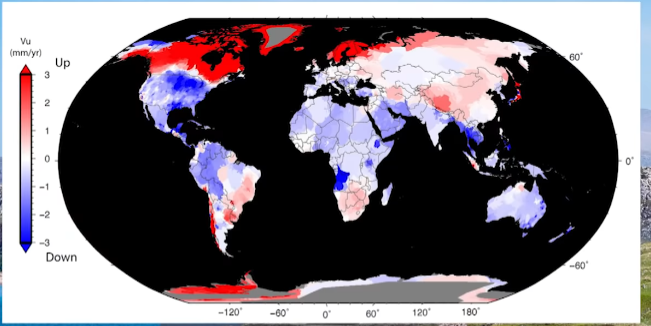 For example, the NOAA keeps a coastal station tide list for tracking global linear relative sea level (RSL). The data and charts can be looked at country-by-country here. Overall, only 3 stations show a RSL rise of 7.5 mm/year or more, meaning only three stations (0.08%) are on track to reach the IPCC’s alarmist 75 cm sea level rise projection by 2100.

And if we use the more conservative and realistic 60 cm rise, only 5 stations (1.4%) are on track.