Browse: Home / 2022 / March / 20 / Cooling Springs: Hamburg Phenological Spring Has Not Been Arriving Earlier Over Past 50 Years

Cooling Springs: Hamburg Phenological Spring Has Not Been Arriving Earlier Over Past 50 Years

The beginning of spring in Germany is when the Hamburg forsythia shrub blooms in the city center.

Although a city center is always warmer than the surrounding area, the location on the Alster is well suited because it has had little building changes within a 2 km radius for 40 to 50 years. Hamburg has been growing outwards since then, which of course also leads to more warmth in the city center, but the influence is not as great as if additional changes in building had been added around the direct location of the forsythia.

Thus, the blooming data of this Hamburg shrub at the Lombard Bridge site are quite good over the last 50 years.

1) a steadily earlier start of spring.

2) That spring 2022 would be particularly early.

3) That the reason for the warming would be the rising CO2 in the atmosphere, currently just below 420 ppm.

Phenologist Jens Iska-Holtz has been observing the forsythia bushes at the Alster in Hamburg for almost 40 years. Therefore, his data for blooming are readily comparable, as he uses a constant standard for comparison.

Using his criteria, the 2022 blooming date of the shrub in Hamburg was March 9, which is 68 days since the start of the year. Over the last 50 years, the chart plots out as follows: 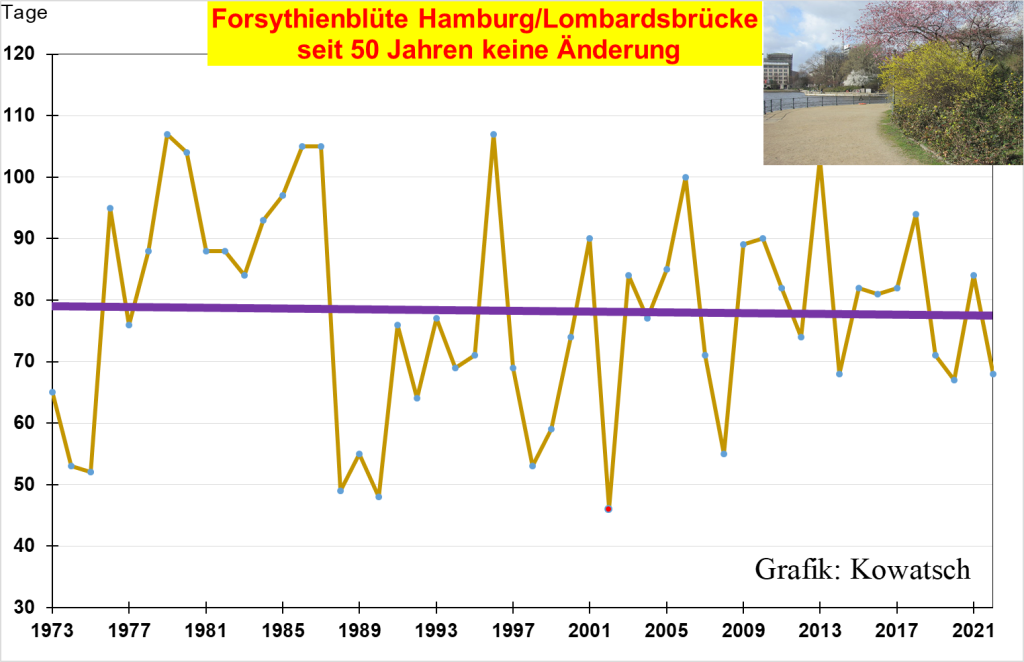 Fig. 1:  The X-axis are the years since 1973, on the Y-axis are the blooming dates measured in days after the beginning of the year, i.e. from January 1st.

The trend line is practically steady at 79 days after the beginning of the year. Observations:

Using the climate unit of 30 years

We now take the new climate unit 1991 to 2020 as the period under consideration and add the last two years as a comparison, a total of 32 years. During this period, CO2 concentrations have increased by a good 60 ppm worldwide. 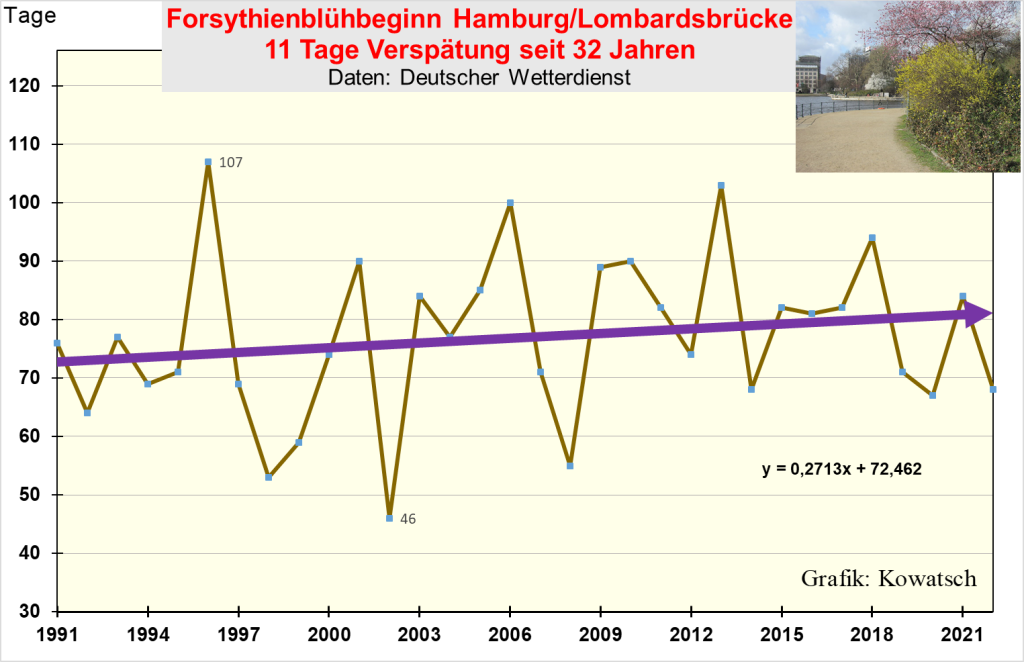 Fig. 2. Note: Rising trend line means lateness. At the beginning of the observation 32 years ago, forsythia tended to bloom at the end of February, and the blooming date has since moved further and further into March. The last February occurred in 2008.

So what explains the delay in spring over the past 30 years, i.e. since 1991 in Germany? Carbon dioxide?

This gas, vital for photosynthesis, has increased by about 60 ppm in the last 32 years and certainly has a stimulating and accelerating effect on the start of spring, but temperatures exert the greater influence. And for the forsythia bloom, the month of February is crucial.

The graph of the Hamburg weather station for the month of February below shows a slight, but insignificant cooling since 1988: 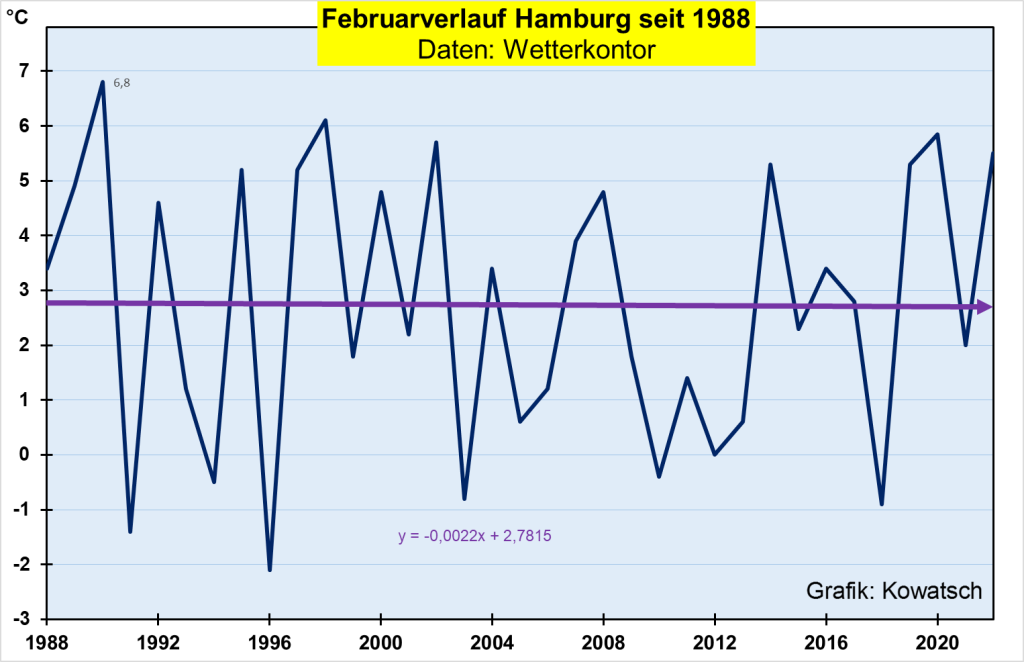 Fig. 3: February has shown almost a zero trend, an insignificant falling trend line for Hamburg for the last 35 years. February 2022 was relatively mild with 5.5°C in Hamburg.

Let’s move on to the question of since when has the Hamburg forsythia bloom been delayed? 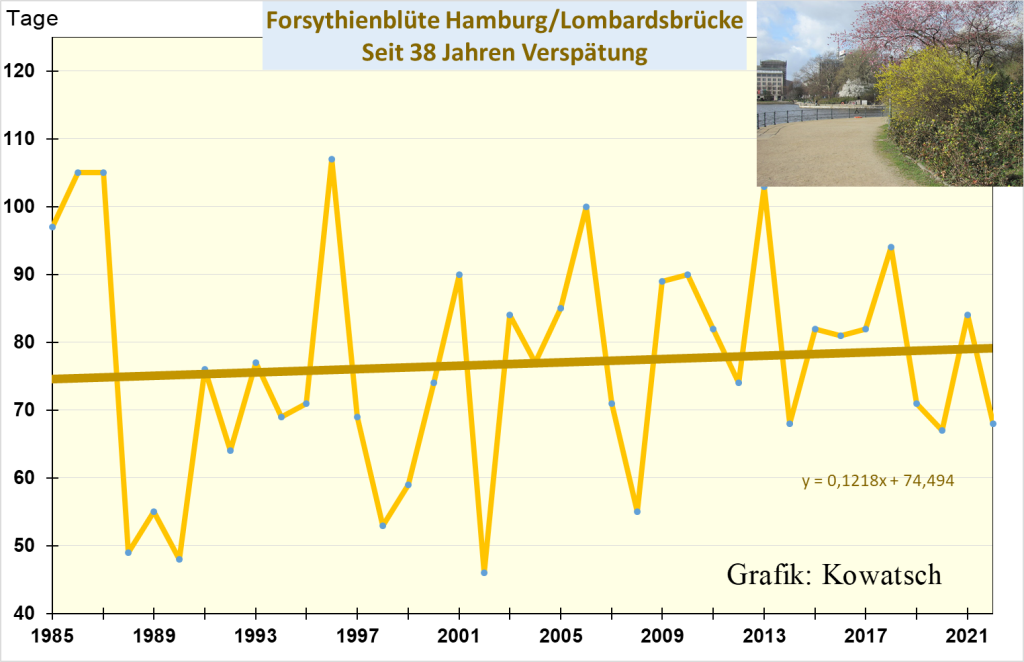 The forsythia bloom has become slightly delayed over the past 38 years, and quite clearly over the past 35 years – although the shrub is located in downtown Hamburg, in a urban heat island. Increasingly late spring blooming is exactly the opposite of what people in Germany are told.

In southern Germany, the forsythia bloomed much later in 2022, and February was not as mild as it was in the northern German lowlands. Especially in locations above 700 m, February was about as cold as last year.

Josef Kowatsch is an independent nature and climate researcher.

7 responses to “Cooling Springs: Hamburg Phenological Spring Has Not Been Arriving Earlier Over Past 50 Years”