Analysis of 1000 years of European wars finds that more war and conflict are not linked to warm climates.

One of the scare stories used by the global warming alarmists is the claim that climate extremes produced by manmade climate change will lead to greater strife and more bloody wars.

But that assumption is not holding up so well according tot eh results of a new study by Carleton et al: “A Song of Neither Ice nor Fire: Temperature Extremes had No Impact on Violent Conflict Among European Societies During the 2nd Millennium CE“.

The authors looked at the last 1000 years of bloody conflict across Europe and compared to how well the matched up to the climate extremes between the years 1005 – 1980 A.D. 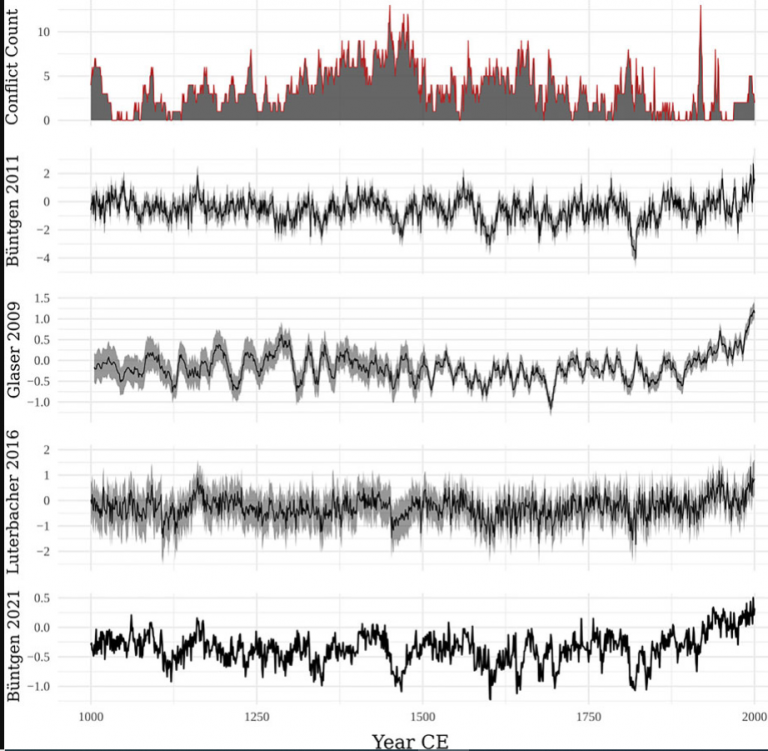 FIGURE 1. Time series data used in this study. Where available, we include confidence intervals for the climate data (middle three panels) and those are represented by lighter grey ribbons. Source: Carleton et al

What did the authors find? Did they find that warm climate periods led to bitter conflicts and so we’ll be sorry if we keep driving climate warming SUVs?

The results surprised the usual doomsayers. Warmer climate periods did not lead to more conflict and wars.

The authors sum up their findings:

Our results indicated that none of the temperature reconstructions could be used to explain variation in conflict levels. It seems that shifts to extreme climate conditions may have been largely irrelevant to the conflict generating process in Europe during the second millennium CE.”

For many of us, this of course comes as no surprise. Wars are simply caused by those in power lying and deceiving their people into hating and fighting, like today.