Climate alarmists hate this inconvenient fact: hundreds of temperature reconstructions show that the northern hemisphere was much warmer over much of the past 10,000 years (Holocene) than it is today.

One recent study: Arctic glaciers and ice caps through the Holocene: a circumpolar synthesis of lake-based reconstructions by Laura J. Larocca and Yarrow Axford, published in the journal Climate of the Past, examined the Arctic ice cap and glaciers over a large part of the Arctic: 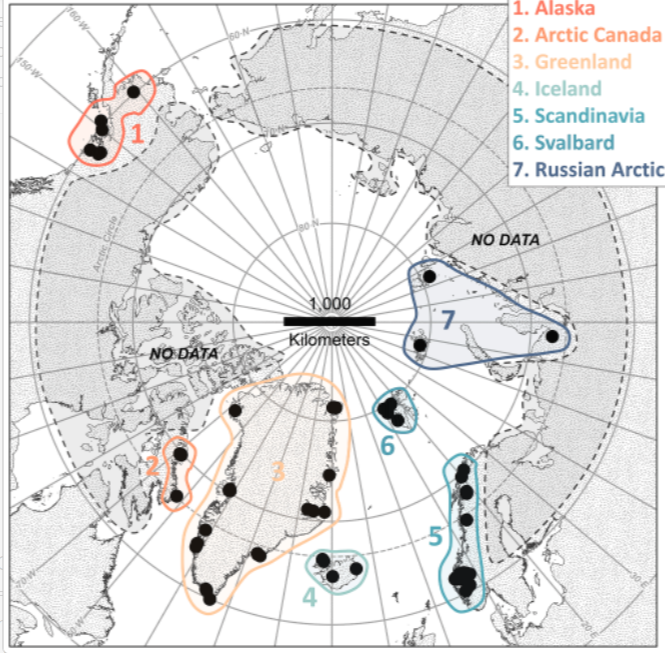 Using a comprehensive sampling of sediment cores extracted from 66 lakes and seas, the scientists reconstructed the melting and expansion of the Arctic ice over the past 12,000 years.

What they found was that the Arctic was far warmer 6000 years ago than it is today. 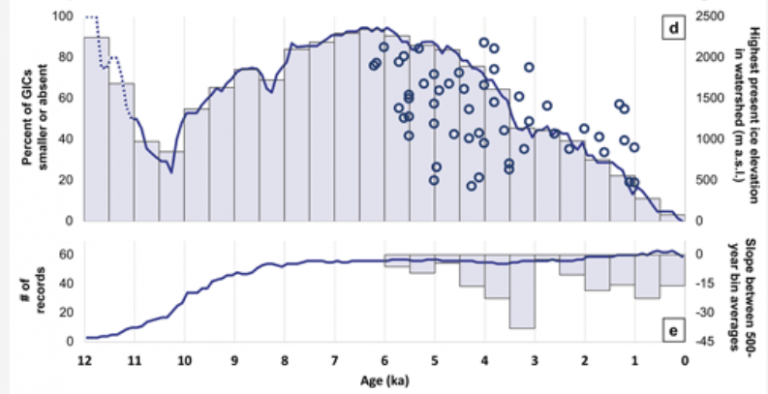 Figure 10d: Arctic-wide summary of lake-based GIC records. The line shows the percent of GICs smaller than present or absent from 12 to 0 ka, calculated in 100-year bins. The dashed line shows time bins in which a low number (<10) of records were available. Bars show 500-year bin averages. Open dots show the timing of earliest GIC regrowth in the middle to late Holocene versus the highest present ice elevation inside the studied lake’s watershed. (e) The line shows the number of records from 12 to 0 ka. Bars show the slope between the 500-year bin averages (above) from the middle to late Holocene. More negative slopes indicate time periods with a higher number of GICs regrowing. Source: Larocca et al, 2022.

In the paper’s Figure 10d (above), the higher the curve, the smaller were the glaciers. Clearly we see that the Arctic region glaciers were much smaller 6000 years ago than today. Many in fact disappeared altogether and so summers were warmer.

We find the highest percentage (>90 %) of Arctic GICs smaller than present or absent in the middle Holocene at ∼ 7–6 ka, probably reflecting more spatially ubiquitous and consistent summer warmth during this period than in the early Holocene.”

Our review finds that in the first half of the Holocene, most of the Arctic’s small GICs became significantly reduced or melted away completely in response to summer temperatures that, on average, were only moderately warmer than today.”

17 responses to “New Study: Arctic Was Much Warmer 6000 Years Ago… 9017 Of Glaciers, Ice Caps Smaller Than Present Or Absent!”