Browse: Home / 2022 / May / 06 / How The German ‘Zeit’ And WMO Misled The Public In Reporting On Global Natural Disaster Trends

The third part of the 110th German Klimaschau looks at natural disasters and claims by organizations and media that they’ve gotten much worse.

Five times more weather related disasters than in the 1970s?

For example, citing WMO report No. 1267 from 2021, German Zeit reported that the number of weather and climate related natural disasters “has climbed markedly since 1970”. Adding: “Between 2000 to 2009, there were five times more than in the 1970s, reported the World Meteorological Organization.” 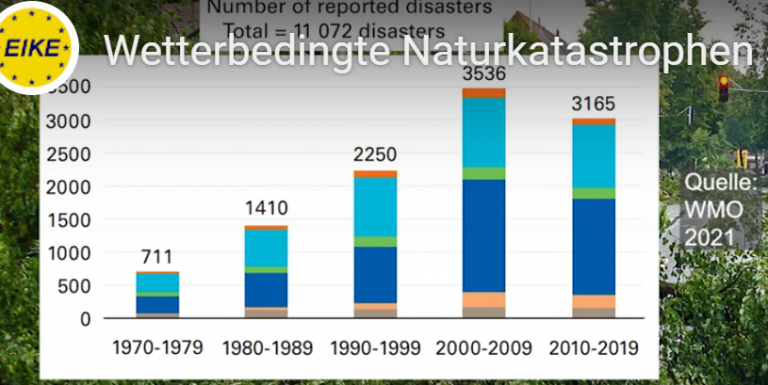 The WMO chart above indeed depicts five times more “reported disasters” during the 2000-2009 period compared with the 1970s. But the 2010 – 2019 period saw a drop compared with 2000 – 2009, something Zeit didn’t bother to mention. That drop alone tells us that the number of disasters does not correlate with the global temperature.

Another point that the media failed to properly communicate to the public was the title of the chart: “Number of reported disasters”. During the 1970s and 1980s, the data recording of natural disasters was incomplete and the system was in the process of being built up. Even Zeit admits it (just once) in its article, writing: “The UN officials attribute this both to climate change and more precise recording.”

Unfortunately, Zeit neglected the more accurate recording as a reason for the greater counted number of recorded disasters throughout the article and instead misled it’s readers with the title: “The number of natural disasters has risen markedly.” In fact, the recording is what has increased. 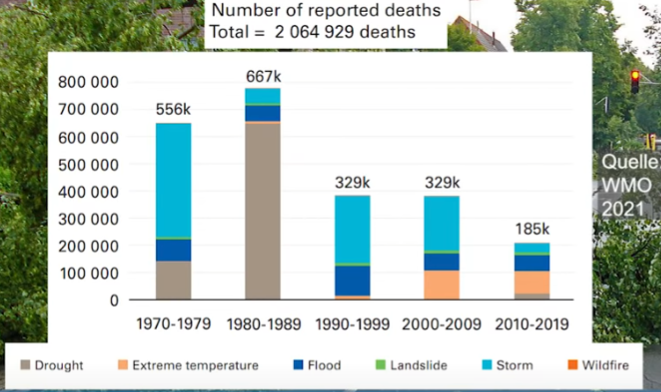 Obviously the above chart doesn’t convey the badly desired doomsday message, and so Zeit decided to make no mention of it and so left its readers in the dark. For Zeit, good news are bad news.

Finally, the chart used by the WMO to show the reported economic losses was likely designed to be misleading, or it was just sloppy work. 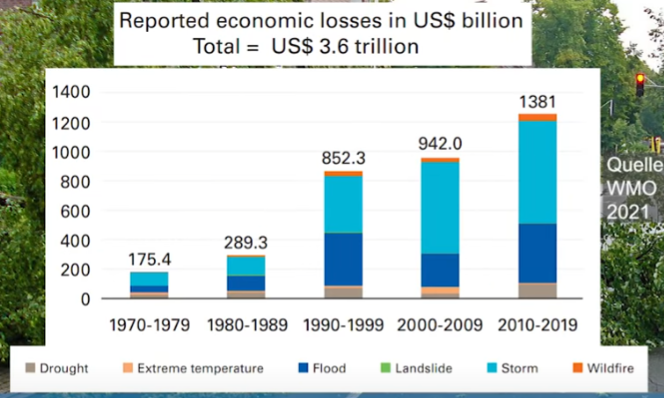 Though the figures were adjusted to take inflation into account, the WMO did not adjust the numbers to take population and wealth growth into account. Today there’s far more property out there to get damaged.