Tokyo Midsummer Hasn’t Warmed In Decades. And: The Missing Hurricanes”.

Continuously increasing CO2 emissions into the atmosphere from the burning of fossil fuels is supposed to be causing warming all over the globe right now, so we should be seeing it in most of the trends.

But often we don’t. The globe, in fact, has cooled somewhat since the El Nino of 2015/16. The media refuse to report that.

One example of no warming is the midsummer mean for Tokyo and its rural Hachijojima island in the Pacific.

Looking at the July mean temperature trend for Tokyo itself, using data from the Japan Meteorological Agency (JMA), and not the adjusted datasets from NASA, we have the following: 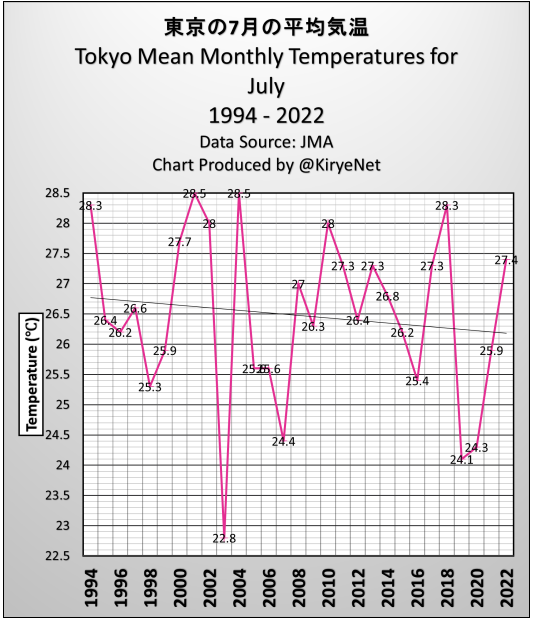 You can check the data yourself. The source is here.

As we can see, July mean temperature in Tokyo has been declining moderately for almost 3 decades.

A century of no warming: Hachijojima

Also for Hachijojima, which belongs to Tokyo and is located in the middle of the ocean 287 kilometers south of Tokyo, we plot the mean July temperature going back almost a century, i.e. long before CO2 emissions by industry began in earnest: 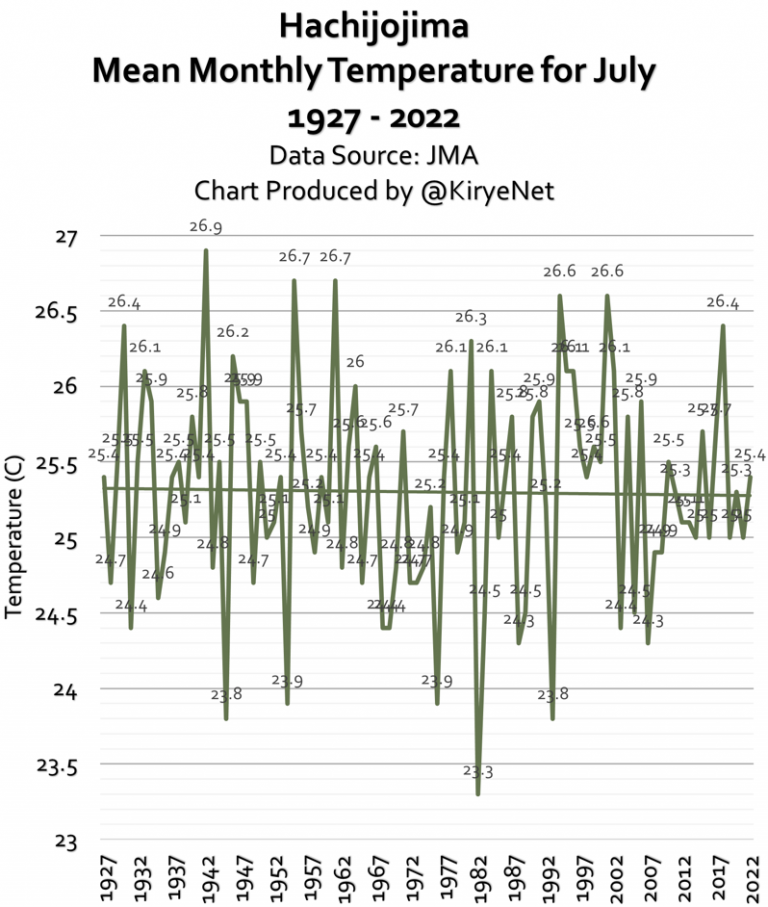 Lo and behold: July mean temperature at this rural island has in fact dipped slightly over the past 95 years. Check it out yourself if you don’t believe it. Above is the link to JMA’s official data, and not the altered rubbish from the U.S. sources.

On another note, the Atlantic hurricane season is off to a very slow start. According to the climate crazies though, we were supposed to be getting battered by tropical storms by now, and like never before in history. But here too, nothing unusual is going on.

The Washington Post has to report that it’s been slow, writing: “Forecasters said the broad weather patterns governing the oceans and atmosphere would come together to boost activity; experts with the National Oceanic and Atmospheric Administration and Colorado State University predicted activity above to well above average.” But have to admit, “The only thing that seems to be missing from a busy Atlantic hurricane season? The hurricanes.”

Friday we’ll look at typhoons in the Pacific, something the WaPo doesn’t like reporting on.

12 responses to “Tokyo Midsummer Hasn’t Warmed In Decades. And: The Missing Hurricanes”.”