German Chancellor Olaf Scholz apparently has had enough of his coalition partner Green Party’s sabotage of the country’s electric power supply and so on Monday he decided that the three remaining nuclear power plants should keep running through the winter – against the wishes of the radical Greens, who also hate nuclear power. 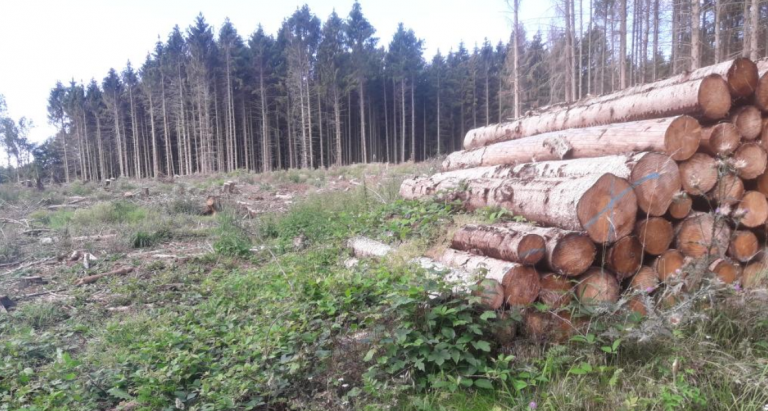 Wood theft in Germany is on the rise as heating fuel prices skyrocket. Symbol photo by P. Gosselin

These three remaining plants were scheduled to be taken offline for good at the end of this year, but Scholz ordered them to stay in operation until April, 2023.

A legal basis will be established and “allow the operation of the nuclear power plants Isar 2, Neckarwestheim 2 and Emsland to continue until April 15, 2023,” Scholz said in a statement. The three plants have the capacity to reliably and cleanly power millions of households and so will be a crucial step in helping Germany avoid a blackout. Without them, Germany would be forced to generate power with natural gas, a fuel that is, however, in short supply due to the disrupted Nordstream pipeline from Russia.

Although the threat of a winter power blackout has diminished somewhat, thanks to Scholz’s announcement, natural gas prices for heating still remain excruciatingly high and this is making alternatives like firewood more attractive. Gas heating bills have become so high that the demand for firewood has risen accordingly and thus has also become extremely expensive.

Wood thieves on the loose

Energy prices are now fueling wood theft. According to the ‘Tagesschau‘, the activities of wood thieves are reaching professional levels. But modern technology should help to prevent the theft.

‘Individual professional timber thieves have also been reported to have stolen entire truckloads in the forest,’ says the North Rhine-Westphalia State Office for Forests and Timber. However, the scarce supply should not tempt people to help themselves in the forest. Timber theft is not a trivial offense, says Gero Hütte-von Essen, head of department at Forestry and Timber North Rhine Westphalia: ‘Stealing timber from the forest without permission or cutting down trees whose wood is then taken is theft in legal terms and therefore a criminal offense. This can be punished with heavy fines, and in special cases even imprisonment.’

For this reason, Forestry and Timber North Rhine Westphalia is now using GPS tracker technology on a random basis. Used correctly, it can be used to catch timber thieves in the act, the authority hopes. If for example, a log is moved, the tracker triggers an alarm to the owner, and the route the thief takes can be tracked precisely.”