The conceptualization of a 33 K warmer Earth due to the presence of water vapor and CO2 (greenhouse gases) in the atmosphere is wholly based on the unobserved and unknown, or assumptions about what an imaginary world with no atmosphere would be like.

It is widely believed that we can determine the effective radiating temperature, a uniformly global temperature, the globally uniform albedo…of a rocky planets simply by conjuring up thought experiments about what a made-up world would be like if it did not have an atmosphere (e.g., no N2, O2, atmospheric pressure, clouds, water vapor…).

This “thought model” has been subjected to critical analysis in a new paper published by four atmospheric physicists. 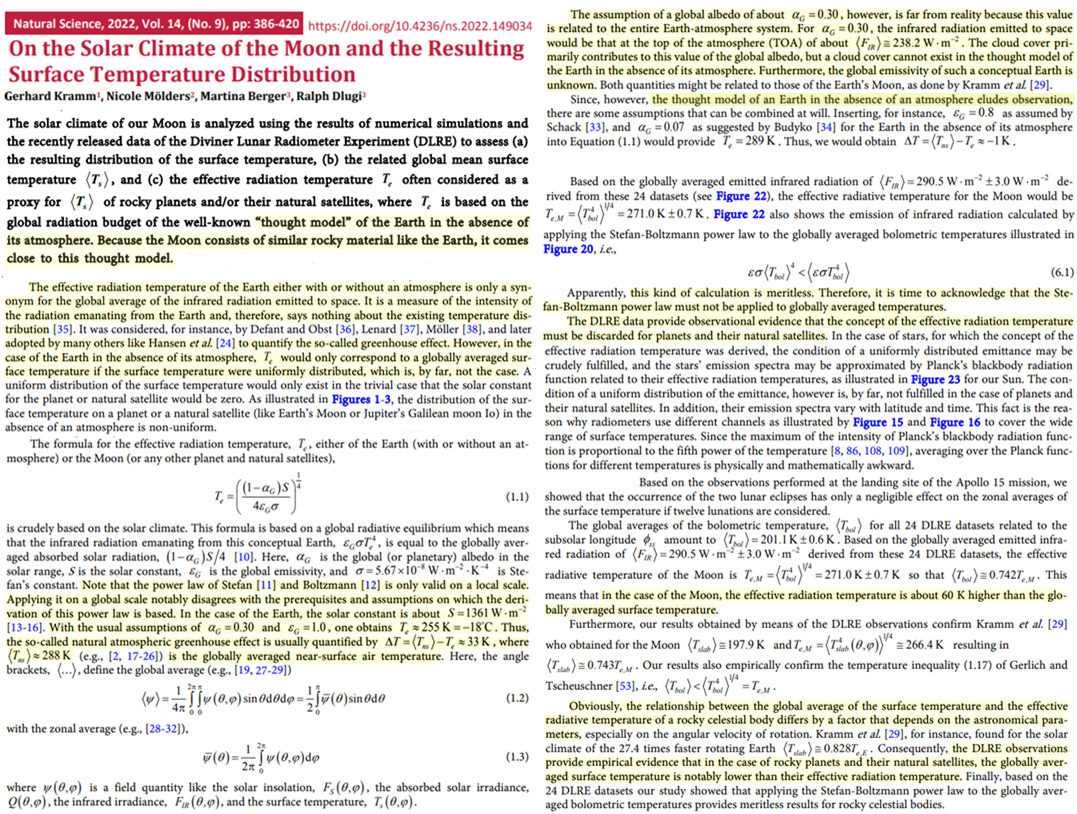 The authors use observational measurements from 24 datasets for the moon — which actually is the closest real-world proximity to a rocky planet without an atmosphere — as their testbed. They conclude that the globally averaged surface temperature is necessarily “about 60 K” lower than the effective radiation temperature, rendering the “thought model” presumptions about a 33 K “greenhouse effect” differential for the effective radiating vs. global average temperature (255 vs. 288 K) “meritless.”

Other instances of a disqualifying contrast between observations and modeled assumptions include:

“[T]he power law of Stefan and Boltzmann is only valid on a local scale. Applying it on a global scale notably disagrees with the prerequisites and assumptions on which the derivation of this power law is based.”

“The DLRE [moon] data provide observational evidence that the effective radiation temperature must be discarded for planets and their natural satellites.”

‘The assumption of a global albedo of about 0.30, however, is far from reality because this value is related to the entire Earth-atmosphere system. The cloud cover primarily contributes to this value of the global albedo, but a cloud cover cannot exist in the thought model of the Earth in the absence of its atmosphere.”