It’s official: the Alfred Wegener Institute Antarctic Neumayer-Station III is a meteorological observation station that’s been measuring air temperature and other magnitudes in Antarctica for 30 years, which is the period of time used to define climate for a region. The results are clear and indisputable. The AWI writes in its press release:

At the Neumayer Station it has not gotten warmer over the last 30 years.”

Note they avoid saying it got cooler. If the trend had been the opposite, the results would have been blasted out to the world in the most vivid terms. Annual mean temperature for the years 1982 to 2011 measured at the Neumayer-Station (all graphics come from the Alfred Wegener Institute): 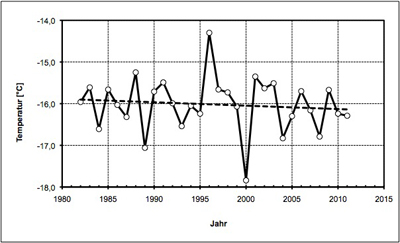 According to the press release, the temperature station uses instrumentation that makes US climatological measurement system look like a meteorological junkyard. The Antarctic station uses a special type thermometer that is protected from the sun’s rays and has a sensitive platinum wire. The thermometer is 2 meters above the surface. Whenever a measurement is made, the surrounding air is set into turbulence and the measurement is then input into a computer. According to Director Gert König-Langlo:

We check the stability of the measurement system on a regular basis using calibration thermometers.

With all the concern over global warming gripping Europe, you’d think this would be all over the news. Nope! Not a peep of this cooling trend has appeared anywhere in the German news as far as I can tell. Unfortunately, the AWI did not offer any explanation as to why they have measured cooling. But it is quick to add:

This development is however a regional change and the measurement data from the Neumayer-Station III  is in no way representative for global climate changes. ‘Only at the centre of Antarctica has it not gotten warmer. On the Antarctic peninsula on the other hand, the mean temperature has risen up to 3°C. We also observe a similar warming in the Arctic,’ says König-Langlo.”

I’ll now take the liberty to offer the AWI scientists a clue: perhaps ocean cycles and currents have something to do with it?

The Neumayer station also shows a powerful upward trend for the amount of sunshine: 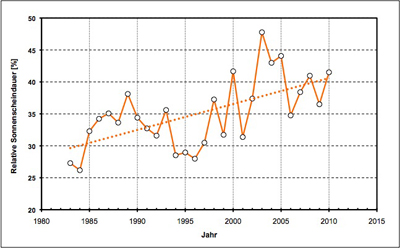 Amount of sunshine at the Neumayer Station of the AWI.

Here, however, König-Langlo doesn’t hesitate to offer an explanation:

Our weather data shows that the part of Antarctica where our station is located is increasingly influenced by high pressure. We have clear skies more and more often. And wherever cloud cover is missing in polar regions, heat gets radiated out and the lower air layers cool.” 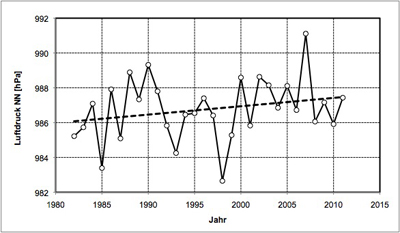 Polar temperatures depend a lot on cloud cover? A couple of days ago it was soot. Sometimes it’s aerosols. Other times it’s all CO2.  I wish these scientists would make up their minds for once! But it’s never the sun, never the oceans (though without them there would be no climate to change). We keep hearing of different warming drivers, but the numbers never add up because nobody dares to scale back CO2 is as a driver. In the end the scientists look absolutely untrustworthy with their explanations – in layman’s terms they make themselves look like they’re FOS.

When you add their numbers up, the result says they absolutely are.

Near the end of the press release comes the pitch for more funding to conduct more research.

Why the temperature curve of the Neumayer-Station differs so much from the other research stations on the Antarctic peninnsula is still the object of current research. “Further measurements and research efforts are necessary to clear up the matter,’ says Gert König-Langlo.”