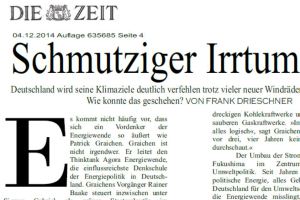 When the green movement itself makes such an admission, then you know Germany’s once highly ballyhooed Energiewende is truly in deep trouble, if not a basket case.

“Germany will not even come close to reaching targets”

Moreover, DIE ZEIT, an influential publication among Germany’s green centre-left, writes, “Germany will not even come close to reaching its climate target despite the massive investment in wind and solar energies.”

The admission is a massive blow to Germany’s renewable energies movement, whose troubles have long been played down or denied by its proponents.

So what has finally compelled Germany’s top greens to make such an astonishing admission? The facts show that although the Energiewende has led to a rapid expansion of wind and solar energies, it has also led to the unexpected increase in coal-fired power. Renewable energies have had the unintended effect of revitalizing coal as a source of energy. A horror for climate protection activists.

The 180° U-turn begins with Patrick Graichen, Director of the Agora Energiewende thinktank, which according to DIE ZEIT, is “the most influential school of thought for energy policy in Germany“. Graichen himself was formerly responsible for energy at the Federal Ministry of Environment.

The DIE ZEIT feature article explains how Germany’s original plan had been to expand wind and solar so that they would first replace the country’s unwanted nuclear power plants, and then later the filthy coal power plants. The idea was to use natural gas power plants to even out the huge irregularities that come with the weather-dependent solar and wind power. And as green and power grid technology developed further, even gas eventually would be throttled down to a bare minimum, and so Germany would be propelled from being the world’s worst villain to a most loved hero – in less than a 100-year span. That was the dream.

But now green energy dreamers are being rudely awakened, and the reality looks very different. More CO2 is being produced. Die ZEIT writes:

It’s a blunder with ugly consequences. The Energiewende, as it is now set up, is not making the air cleaner, but dirtier.”

The problem, DIE ZEIT explains, is that the coal is much cheaper than natural gas. As a a consequence power generators are opting to even out the green power supply fluctuations with coal power instead of gas. But because coal power plants cannot be driven up and down quickly to respond to fluctuations in supply, power producers no longer even bother throttling them down when too much power is fed in by wind in sun. The coal power plants just keep on humming and emitting anyway – even when the power is not needed. In the end it’s still cheaper than operating gas plants. Result: gas plants are being closed down, coal is coming back.

The requirement to feed in green power and all the extra unneeded coal-fired electricity are now causing grotesque distortions on the electricity markets. To illustrate the perverse market conditions, DIE ZEIT describes the events of Sunday, May 11, 2014, when so much wind and solar power was fed into the grid that the power became worthless on the market and at times caused negative prices on the electricity exchanges, as DIE ZEIT illustrates:

The price on the market fell to nothing. A little later before noon, there was so much green power on the market that the German power companies were paying money to get rid of it. By early afternoon when solar power was flowing plentifully, the so-called negative power price rose to 60 euros per megawatt-hour.”

Negative prices due to an uncontrolled supply into the grid is no longer an isolated event that rarely occurs. DIE ZEIT continues:

And that is no isolated incident; it’s the future of German power production. In the first half of 2014 power prices were negative for 71 hours. But already in just a few years that number could be one thousand hours per year, according to the think tank Energy Brainpool. One quarter of the entire green energy production would be energy garbage.”

Skyrocketing electricity prices for consumers while the price on the exchanges go negative: This has got to be one of the 7 wonders of German energy management.

Clearly the German electricity market has careened out of control and is in a state of chaos. Now even the strongest denier greens can no longer stomach the deplorable electricity market situation and are conceding it has to change.

DIE ZEIT then asks how it all came to this in the first place. Patrick Graichen blames what he terms the “collective miscalculation by the experts in the branch” who falsely assumed green energies would crowd out dirty coal plants. Graichen claims that “no one could have foreseen the development.”

They are starting to confess what is not longer deniable because it’s so obvious to everyone else…typical for politicians in action. Yet, rather than taking responsibility for the damage they have created, they are now trying to act as if it were an Act of God when in reality it was completely foreseeable and they had been warned on many occasions.”

No one can say all of it was unexpected. Early warnings of disaster have been frequent and since quite a long time. The rubric “Alternative Energy” at the NTZ side bar is chock-full of articles on the troubles in the renewable energy sector. What follows are just a few examples: