Despite all the alarmist claims of an Antarctic meltdown, it is well known that the trend for sea ice extent at the South Pole has been one of growing ice rather than shrinking ice over the past 4 decades.

Yet data show the warmer surface temperatures are refusing to happen in Antarctica! As you will read below, it was far warmer 100 years ago.

First we begin with the example of Showa Station, Antarctica, where it is cooling slightly even as CO2 levels have risen rapidly, Japanese climate blogger Kirye tweeted here, citing the Japanese Meteorological Agency (JMA): 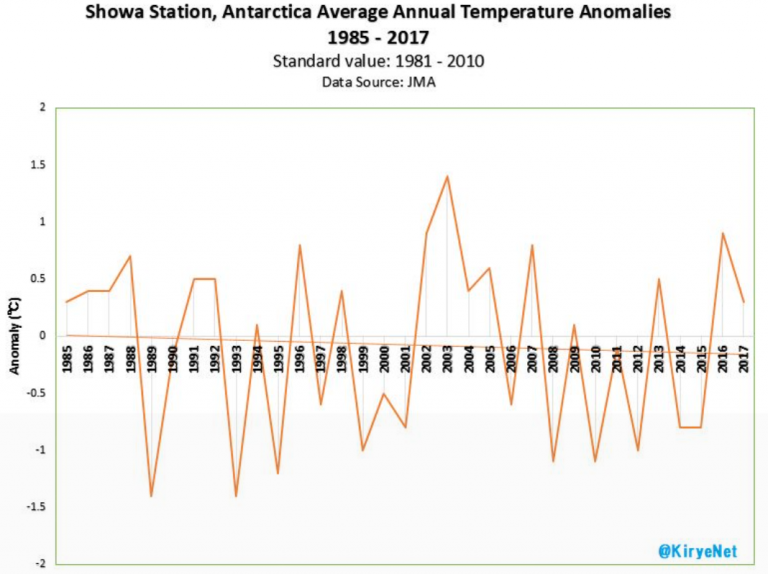 No trend at Davis Antarctic station

In reply to Kirye, AndyOz tweeted that there also has been no warming at Australia’s Davis station over the past 50 years: 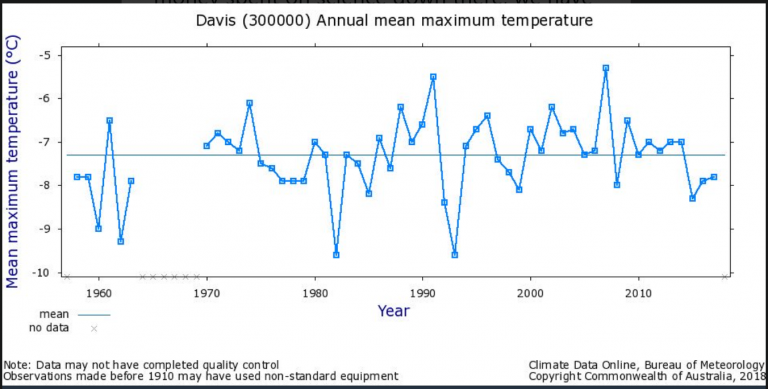 Showa and Davis, however, are just two stations at the edge of a vast continent. We certainly don’t want to be cherry-picking.

Climate Trends site here looked at 13 stations across Antarctica that go back some 50 years or more: The site concludes: “that apart from at the three stations located on the Antarctic Peninsula, none of the records at the other ten stations show any consistent trend to either increase or decrease significantly over the past 50 years”.

Climate Trends notes that three stations located on the Antarctic Peninsula have increasing temperatures over the past 60-70 years and that it’s possible they are affected by changing wind patterns, ocean currents or volcanic activity.

The question remains: What’s happening to the temperature of the entire south pole, other than sea ice trending upwards? Last year Kenneth Richard posted here on this, presenting recent literature by Stenni et al which shows that the South Pole is indeed cooling: 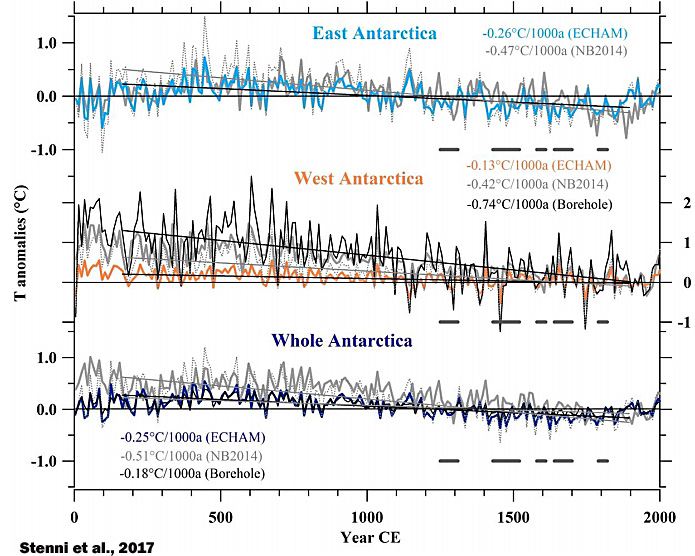 Antarctica was much warmer 100 years ago

Kenneth also uncovered a recent publication (Fogt et al 2017), which wrote that measured Antarctic temperatures during exploratory expeditions in 1911 and 1912 were “much warmer” than they have been at any time since 1957. Kenneth added:

In fact, there have ‘never’ been temperatures exceeding the early 20th century warmth of the recorded South Pole daily mean temperatures in the last 60 years.”

Imagine the media hysteria if such warmth happened today. The many climate neurotics out there would be shrieking, demanding a state of emergency.