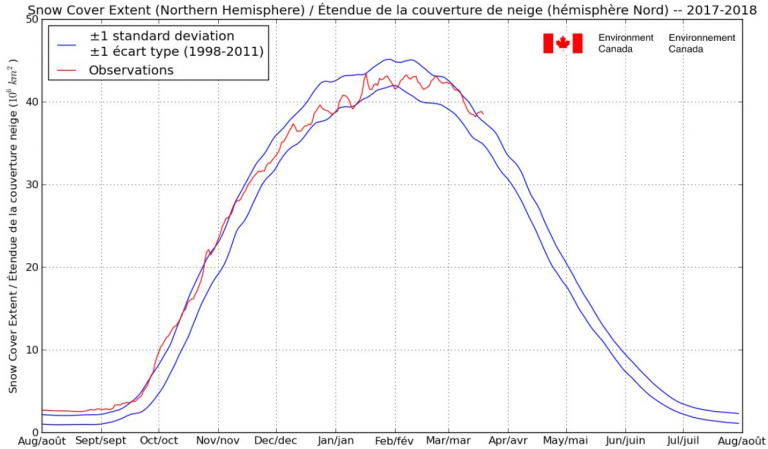 As the above chart shows, over much of the winter of 2017/2018, snow and ice cover was well above normal, bucking the assumption that warm surface means it’s warm everywhere. That’s a clear sign that climate is a lot more just than a few measurement points at the surface.

And with all the surface “warmth” allegedly occurring at the Arctic this winter and the recent consecutive years of “record high global temperatures”, one would have to logically conclude the Arctic and Antarctic have to be melting rapidly. Yet snow cover data show a very different story: 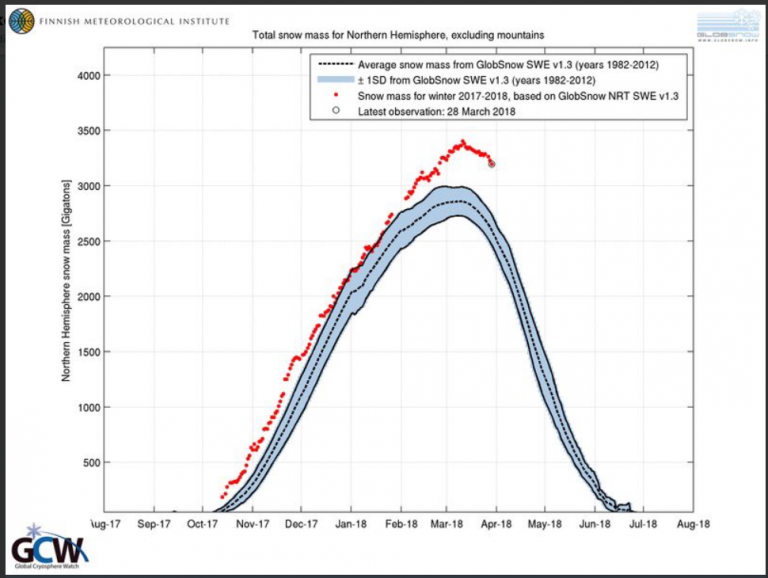 Total northern hemisphere snow and ice cover this winter has been exceptionally high, according to the Finnish Meteorological Institute.

Cold below the surface?

Ice cover area is only one indicator of the climate system. More important is Arctic sea ice volume, as ice shrinks when it warms and grows when it cools.

Looking at the Arctic sea ice volume on March 15, 2018, we see that it is far above what was recorded 10 years earlier: 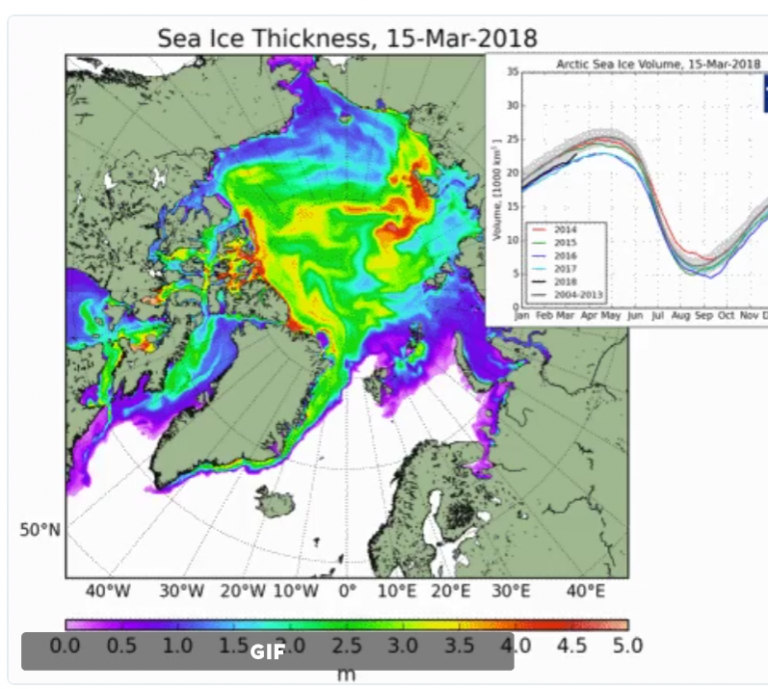 Arctic sea ice volume has rebounded and is close to normal levels, despite the very warm surface conditions in the Arctic this past winter. This can only indicate that other sub surface cooling factors (such as ocean dynamics) are at play.

This shows us that surface warming does not say anything about global warming, and vice versa when it comes to cooling.

Antarctic cooling in a warming planet?

No place has bucked warming more than Antarctica, which has shown a clear growing sea ice cover since 1980. A recent study concluded:

Compelling evidence indicates that the large increase in the SH sea ice, recorded over recent years, arises from the impact of climate modes and their long-term trends.”

In other words, it gets down to below surface ocean and above surface solar cycles.

Surface climate is not global climate

Global surface temperatures are arguably a very poor indicator of global temperature. Surface is only a thin slice from a vast system.

The reality: the earth’s thin surface tells us almost nothing about the entire seabed-to-ionosphere system.

Calling the conditions at the surface “global climate” is extremely narrow minded. It’s like a traffic engineer measuring the number of cars going by at one point along an unknown street only once over 30 seconds and hoping that data will let him to accurately calculate total traffic flow over a whole day, month or an entire year.

The ocean is in a state of constant of flux involving huge complex currents and cycles with periods ranging from months to centuries. Very few of these cycles are understood to any appreciable extent. Scientists are still not able to forecast the ENSO.

Moreover at the seabed there are also thousands of active volcanoes. No one could possibly know what climate-impacting beasts lurk beneath the surface of the oceans.

So when it comes to making useful predictions, the data volume we are missing is conservatively 10,000 times greater than the scant data we have collected thus far. So any scientist who claims he can make a reliable forecast 100 years out must either be incompetent, or a fraud.

To show how fast things can change, the following chart shows how much ocean surface temperature changed in just one week: 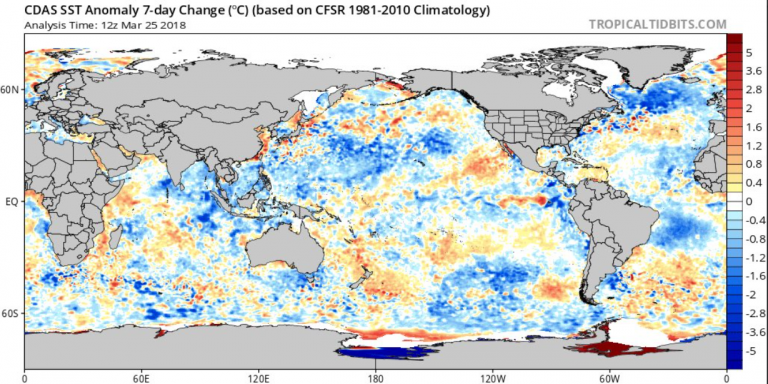 This means that the oceans are real, unpredictable climate drivers.