Germany’s DWD national weather service has released the preliminary mean weather results for the country for March, 2018: “In summary a cold March, again snow in the north and east.” 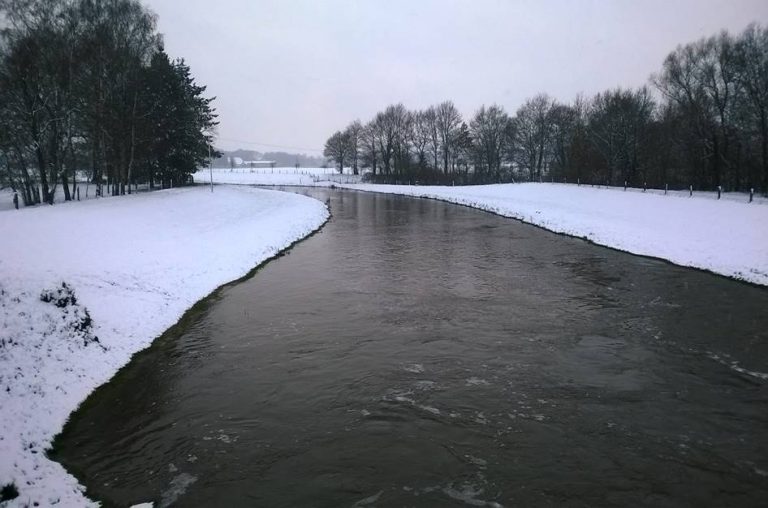 The reason for the cold March, according to the DWD: “Germany was in a mostly dry, very cold easterly air pattern. Atlantic lows from the west could hardly make any headway.”

According to data collected from the country’s 2000 weather stations, Germany’s preliminary mean temperature for the first month of spring came in at only 2.5°C, which is 1.8°C below the 1981-2010 reference period mean.

The coldest treading recorded was -19.2°C  occurring at Barth near Stralsund. March, 2018, was the second month in a row with below mean temperatures in Central Europe.

The following chart gives the mean temperature for each state (Source: DWD): 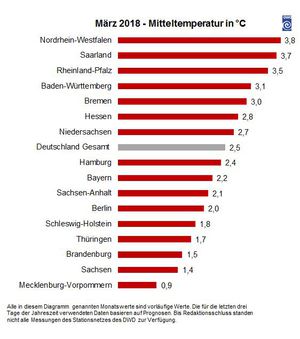 March was drier than normal as well, with 50 l/m2 of precipitation falling (mean = 57 l/m2). However, the DWD writes that March 2018 was “characterized by extreme wintery periods, with considerable snowfall in some regions.” Also some “lake-effect” areas near the Baltic sea saw 40 cm of snow. “

At 110 hours of sunshine, Germany almost hit the dead mean of 11 hours.

Meanwhile Austria’s weather and climate service ZAMG reports that March has come in “cool and overcast”.

According to ZAMG climatologist Alexander Orlik, sunshine came in 20% below the mean and temperature came in at 1.3°C below the mean. There wasalso “an unusual number of frost days, where the temperature does not climb above the freezing point. the ZAMP reports. Vienna saw five such days and Graz saw four. Normally these cities see only one “frost day” every two or three years in March.

Meanwhile for some parts of Germany snow is forecast for the Easter holidays. According to Tag24, snow is expected to fall in Saxony. This will be the second Easter in a row with snow. What follows is a vid of Wolfsburg, Saturday, March 31st:

So, Europeans have been waiting 18 years for snow to become a thing of the past. Increasingly it’s becoming a thing of spring.