Browse: Home / 2018 / April / 01 / Climate Skepticism Storms Into Germany’s Bundestag As Parliamentarians More Concerned About Getting Out Of Town!

Climate Skepticism Storms Into Germany’s Bundestag As Parliamentarians More Concerned About Getting Out Of Town!

Germany’s right-wing AfD party and (at times) the FDP Free Democrats, are the only parties across the German political landscape who are challenging climate change science and the country’s much maligned Energiewende.

Of course the media in Germany, where man-made climate disaster is accepted as fact, tries to use this to portray skeptics as being extremist and crackpot.

Yet, the FDP and AfD together make up a formidable 25% of the German Parliament, and so climate policy is no longer getting the unanimous free pass it used to get. Also a faction of Angela Merkel’s CDU party have expressed reservations about climate science and green energies. Some things are moving.

Skepticism is budding in Germany, and that is in some ways remarkable in the consensus-driven country.

On Friday, March 23, before the Bundestag (German Parliament), Karsten Hilse of the AfD (Alternativ für Deutschland – Alternative for Germany) party told before Parliament that there is nothing unusual happening to the global climate today, and that the changes we are currently observing are well within the natural range.

Hilse then scoffs at claims the planet is heading for an apocalypse.

Next Hilse reminds that climate is defined as the mean of 30 years of weather, and goes on to call measures aimed at “protecting weather” absurd. He also alludes to the corrupt nature of German climate research: “The institutes deliver exactly what their funders request.”

Hilse expressed his party’s doubts that one extra molecule of CO2 per 10,000 has the climate impact that is often claimed to have. He reminds that the global warming is mostly generated in models – models that are unable to reproduce the past, and thus cannot be relied on to make forecasts for the future.

At the 2:40 mark Hilse fields a question from an opposing Parliamentarian, who asks why Hilse rejects the consensus of “99% of independent scientists”. “Which scientific sources are you citing for your pseudo-statements?” Hlise explains (amid some background shouting) that the study in question is flawed: Of the 12,000 publications examined, some 8000 took no position at all. Background here.

Near the end, Hilse went on to reject the government’s de-carbonization effort by 2050, often dubbed as the Great Transformation, and Germany’s participation in binding international decarbonization treaties.

He also says the AfD is calling for a stop to the financing of pseudoscience and an immediate stop of the German EEG renewable feed-in act, which he calls a “socialist redistribution”, that so far “has cost consumers several hundreds of billions of euros”.

Viewers will note how the Parliament is almost empty for that particular session on CO2 emissions, which tells us just how seriously the German government takes “humanity’s greatest threat”. 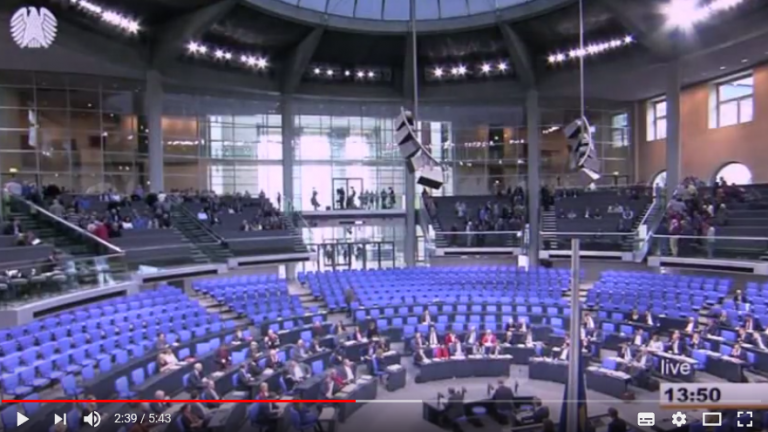 Image: Screenshot of the homepage of the Deutscher Bundestag Mediathek

Obviously few of them cared enough to show up, and most were more concerned about getting out of town really early for the weekend.

46 responses to “Climate Skepticism Storms Into Germany’s Bundestag As Parliamentarians More Concerned About Getting Out Of Town!”