Brimstone and fire predictions of an ice-free Arctic made 10 years ago by leading scientists, politicians and media outlets are emerging today as preposterous.

Recently climate catastrophe non-believers have been pointing out that Arctic sea ice volume has been gaining over the past years and has not trended downward for some dozen years now.

And global warming alarmists have been very silent on the subject of climate change now that global surface temperatures have cooled and Arctic and Greenland snow and ice have rebounded.

Embarrassed, they don’t want to be reminded of all the absurd predictions they made 10 years ago, with some as recently as just five years ago.

Now is a good time to remind them and ourselves once more of these preposterous, charlatan-quality predictions.

For example in 2007, German online national daily Die Welt here warned that “an team of international climate scientists and researchers at NASA claimed the Arctic summer would be ice-free already in 2013.

According to Die Welt, NASA’s “climate expert” Wieslaw Maslowski of the Naval Postgraduate School in Monterey made the claim at a meeting of the American Geophysical Union.

In 2007, 2008 and 2009, Gore publicly and very hysterically warned that the North Pole would be ‘ice-free’ by around 2013 because of alleged ‘man-made global warming.’ Citing ‘climate’ experts, the government-funded BBC hyped the mass hysteria, running a now-embarrassing article under the headline: ‘Arctic summers ice-free ‘by 2013’.’ Other establishment media outlets did the same.”

Not only rabid activists or hysterically mad NASA scientists were seeing visions of the end of the Arctic, but also a lead scientist at the National Snow and Ice Data Center (NSIDC). Mark Sereeze announced on CNN in June 2008 that there was a 50-50 chance the Arctic would be ice-free by the end of the summer.

Well, at least give Sereeze credit for admitting to some uncertainty.

Hansen: Arctic ice-free in 2018 at the latest

Not long ago Tony Heller at Real Science here reported that NASA’s James Hansen said on June 23, 2008: “We’re toast if we don’t get on a very different path,” and that Hansen and his fellow scientists saw a tipping point occurring right before their eyes and that the Arctic was melting exactly the way they said it would.

Hansen added that the Arctic would be ice-free in 5 to 10 years. It never happened.

Spiegel: sailboats in an open Arctic in 2008

On June 27, 2008, Germany’s Der Spiegel cited scientists when it reported that the Arctic was “melting at a brutal speed”.

The German flagship weekly also quoted researcher Olav Orheim of the Norwegian Research Council: “Already last October I was predicting that the Arctic could be ice-free this summer” and “In August or September we will be seeing people cruising in sailboats up there.”

It is already upon us and its effects are being felt worldwide, right now. Scientists project that the Arctic will be ice-free in the summer of 2013. Not in 2050, but four years from now.”

The Sierra Club Canada reported in 2013 that the Arctic would be ice-free that year.

However readers will notice that the link no longer functions. Maybe the story simply became too embarrassing and so it was taken down.

Finally, Peter Wadhams, Professor of Ocean Physics, Head of the Polar Ocean Physics Group in the Department of Applied Mathematics and Theoretical Physics at the University of Cambridge, said in 2007 that Arctic sea ice would be lost by 2013. Recall that Wadhams was a renowned expert.

And climate alarmists are still baffled that there are skeptics out there?

Today Arctic sea ice shows no signs of melting away, and in reality it recently reached its third highest volume for a few days since 2003, according to Japanese climate blogger, Kirye at Twitter: 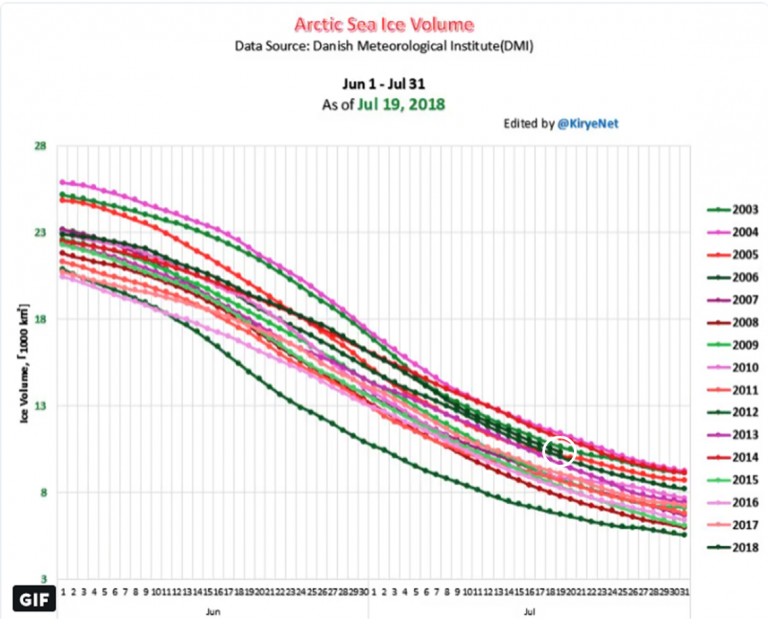