Northwest Europe has been awfully dry since April this year, and Germany is on track to set a new record for most days over 30°C this year. Real experts says it’s due to natural cycles.

Moreover, acute drought conditions have taken hold across parts of northern Europe and the situation threatens to significantly worsen before things improve.

The online Austrian Wochenblick reported here, however that the finger pointing is misguided, and writes that the northern European heat is merely weather and not related to manmade climate change.

Not related to climate change

Klaus Haslinger, climate scientist at the Austrian Zentralanstalt für Meteorologie und Geodynamik (ZAMG), told the Wochenblick that the very dry conditions fundamentally are “nothing more than a weather phenomenon and that it has nothing to do per se with ‘manmade climate change.”

Haslinger, who specializes in regional climate analysis. modelling, hydrology and drought, explains that the dry weather is due to a blocking high positioned over Scandinavia and that acts to prevent moist Atlantic air from reaching Northern Europe. He told the Wochenblick that the situation, however, looks very different in southeastern Austria.

While extremely dry conditions persist over northern Europe, much of southern Europe is seeing the opposite.

A couple of days ago meteorologist Joe Bastardi of WeatherBell Analytics tweeted the following charts which show that although a large part of Europe is dry, the situation was far worse across much of Europe back in 2003:

Joe explains that the northern European drought is likely because of the sudden cooling in the northwest Atlantic, which leads to the development of the summer ridge.

And when it comes to drought and climate change, climate alarmists like to tell us that periods of extreme dryness are only going to get worse as global temperatures rise. Yet a recent long term study shows worldwide droughts have decreased over the recent decades: 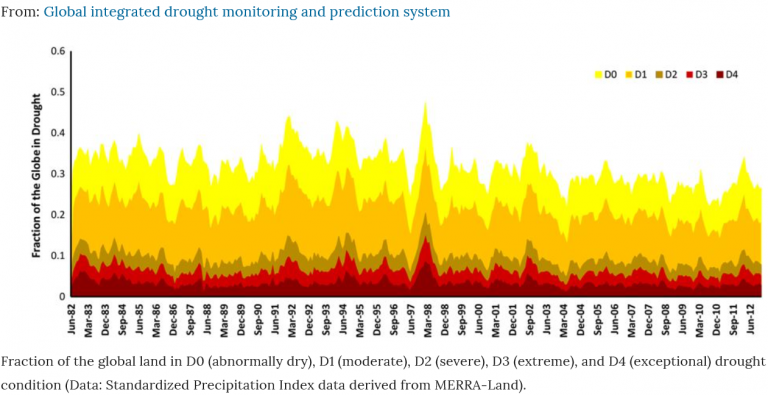 Droughts worldwide easing over the past 35 years. Source: Nature.

Central Europe has trended wetter over the past 15 years

Concerning Central Europe going dry during the summer, as a number of climatologists warned in the wake of the extremely hot and dry 2003 summer, Central Europe summers have in reality gotten wetter, and not dryer.

After this summer Germany will finally be able to book a dry one.

The climate “experts” have once again been shown to be totally wrong with their forecasts of scorched Central European summers.