Ed Caryl, author of One Of Our Hemispehere Is Missing and A Light In Siberia, brings us his latest essay. If history is an indicator, then today’s simultaneously declining PDO and AMO, in combination with a solar quiet period, mean that a “rapidly cooling situation” may be in the works, or we could even be “headed for a new ice age”.

Sunspots and Temperature
by Ed Caryl

Sunspots have been tracked systematically since 1700. Temperature has been recorded in Central England since 1659. We can compare these two records and measure the relationship. Both are plotted below. 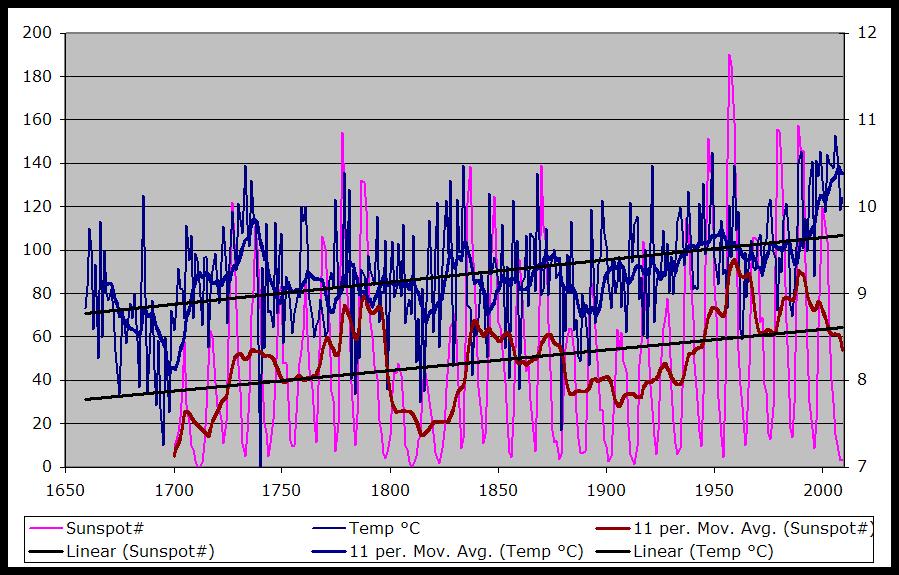 Below, the irradiance data is plotted against the temperature data seen in Fig. 1 above. The irradiance is in watts per square meter. Notice that the since the Maunder Minimum, the irradiance as increased by almost 3 watts/m2, on the same order as the supposed recent CO2 warming.

Figure 3 follows, and is a scatter diagram of solar irradiance and temperature. Note that it also shows a trend of 1 degree from minimum irradiance to maximum. That also corresponds to 0.4 degrees per century.

Another thing to notice is that warming takes place immediately as sunspots and irradiance increase, but cooling seems to be delayed by a few years. This is likely due to the oceans’ “flywheel” effect on land temperatures, as has been noted by Juraj Vanovcan here. The oceans take a long time to react to solar influence.

What does this say about the future?

The land temperature at the end of the Maunder Minimum was still falling after 50 years of no sunspots and minimum irradiance. During the Dalton Minimum from 1800 to 1835, it took almost 20 years for the Central England temperature to react by cooling. Other cooling events, in 1740 and 1880, have happened faster. The reaction time depends on timing with ocean cycles.

The Dalton Minimum took place during a high point in the PDO, but the PDO was falling in 1880. At this time, 2010, PDO has fallen, and AMO is starting to fall. With the solar cycle staying low, we may be in for a rapidly cooling situation.

What about CO2? According to the U. K. Met Office, the rise in the Central England temperature record after 1974, “has been adjusted to allow for urban warming”. They don’t reveal what those adjustments were, so that portion of the record should be taken with a grain of salt, especially the last 10 years. No other evidence of anthropogenic temperature rise can be seen.

6 responses to “Sunspots and Temperature”