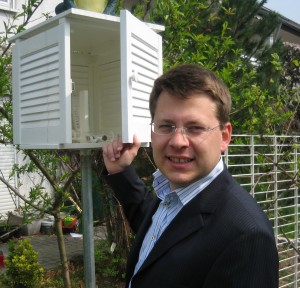 So forget the Met Office and PIK, who have proven themselves to be quite the laughing stocks. All that good money flowing into these institutions, and such rubbish coming out.

Meteorologist Karsten Brandt of German weather service company donnerwetter.de provides us with an outlook for 2011 and the next 10 years ahead. Read here (in German).

More cold winters over the next 10 years

Clearly though, the NAO plays an important role in Europe’s weather. Knowing what the NAO will do for the next 10 years allows you to make a predictions for Europe’s climate ahead. Karsten Brandt writes:

It is even very probable that we will not only experience a very cold winter, but also in the coming 10 years every second winter will be too cold. Only 2 of 10 will be mild.

Dr Brandt is not some lone guy out there making this kind of blasphemous prediction. A large number of meteorologists and climatologists are projecting the same, e.g. like Accuweather’s Joe Bastardi and warmist climatologist Mojib Latif. Even the Potsdam Institute for Climate Impact Research is joining the chorus, but claiming the cold is due to warming.

Over the short-term Dr Brandt says that making a reasonable forecast for the next 2 months is not that hard, and that one can generate a pretty good idea of how the rest of the year will develop. Last year much of western Europe had a cooler year. What ‘s the outlook for Germany for 2011? Brandt writes:

Compared to the last 20 years, 2011 will turn out with a high probability to be too cold. Instead of 11°C in the west, or 10°C in the north and east, we expect only 8-10 °C, i.e. 1°C colder than the last years. Especially the cold start in the year and the suspected once again colder end of the year will pull the year’s temperature down.

Hopefully municipalities will procure the necessary wintertime snow-clearing equipment and stockpile sufficient amounts of sand and road salt so that next winter citizens will not have to endure the horrific traffic conditions that they are now experiencing over much of Europe. And you home centers ought to think about ordering snow shovels next fall.

But don’t despair, Brandt says the chances for a warm spring and a warm summer month aren’t bad.

Finally, here’s what the National Weather Service is showing: