Share this…FacebookTwitterIt’s up, up and away! The prices that is. The UK Daily Mail reports today that inflation has reached the highest level in 20 years. Price increases have been fuelled primarily by an increase in VAT from 17.5% to 20%, and spiralling energy prices. The Mail writes: For millions, the biggest battle is finding the […]

Share this…FacebookTwitterWe have to keep repeating this because the irresponsible media keeps distorting everything. Zettels Raum brings the latest update here. So far every single one of his reports has been spot on.  Here are the latest main points: Works on the nuclear power plant have made amazing progress. One can say with high probability that no big accident […]

Share this…FacebookTwitterMany of you may have noticed that Steve Goddard at his Real Science site has recently posted a number of similar articles, putting to rest that weather extremes are exclusive to today (because of our CO2 emissions). Indeed they were just as frequent in the past. This story here is just the latest, from […] 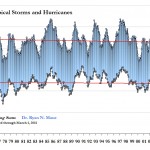 Share this…FacebookTwitterFlorida State University scientist Dr Ryan Maue has an update on global tropical storm activity. Now if global warming causes more, and more intense storms, then there must be some serious cooling going on right about now. Storms are practically off the radar! Here’s the chart for the last 40 years. Dr Maue writes, adding […]

Earthquake Caused A Displacement Of Up To 27 Meters

Share this…FacebookTwitterThe animated graphic below was created by geophysicist Joachim Saul from the Helmholtz Association GFZ Research Centre for Geosciences, read here and shows the sequence of quakes since March 9. The animated image is available at www.gfz-potsdam.de. Click the image to activate. The GFZ press release writes: It shows the earthquake activity in the region of […]

Share this…FacebookTwitterSome sad news I am compelled to report today. The German poster child of Arctic ice melt, polar bear Knut, died mysteriously yesterday at the Berlin Zoological Garden. No animal had ever been so instrumentalized by the German media for the purpose of rallying attention and sympathy to the mythical plight of the polar […]

Share this…FacebookTwitterH/t: Oekowatch ARD public television is Germany’s flagship news channel which broadcasts its “Tagesschau” news at the prime-time slot of 8 p.m. You can compare it to the BBC News (unfortunately its reputation is following the same path). It’s no secret that the German media has über-hyped the news in Japan in order to […]

Share this…FacebookTwitterIn none of the reactors are there processes where there is a danger of something going out of control. The nuclear catastrophe is not taking place.” That’s quoting Zettels Raum blog description of the deescalating situation at the Fukushima Diichi facility. Zettels Raum blog has been monitoring the Fukushima incident since the start, and reports on […]

Share this…FacebookTwitterDer Spiegel has a report here today on what an accelerated shutdown of all 17 German nuclear reactors by 2020 would mean. Germany was spooked by the nuclear disaster in Japan, all fueled by turbo-hysteria from its media. In a knee-jerk reaction, unmatched by no other country in the world, Angela Merkel’s coalition government ordered 7 […]

Hysteria, Dogma Risk Catapulting Germany Back To The Dark Ages

Share this…FacebookTwitterProgress is not achieved by abandoning development Imagine if the Wright Brothers had abandoned flight after the first mishap, only listening to the voices of fear that heavy objects have no place in the air and that it isn’t possible to eliminate accidents? Imagine if society had abandoned the automobile after the first deadly […]

Share this…FacebookTwitterOf course the situation is very serious, but very likely nothing like what the chronic habitual alarmists portray it be. Look – it’s a messy job cleaning this up and things will neither go smoothly nor happen right away when you want them to.Right now you’ve got hundreds of thousands of poor earthquake victims outside […]

Angela Merkel Reveals Climate Hoax, Putting Her Political Survival Ahead Of “The Survival Of The Human Race”

Share this…FacebookTwitterIf saving the human race from the imminent climate disaster is so imperative, then why did Chancellor Angela Merkel request the immediate shut-down of CO2-saving, technically sound nuclear power plants in an area free of earthquakes or tsunamis? Merkel suddenly decided that coal power plants emitting 4% more CO2 is no longer a problem. Not […]