Wind power in the U. S. is most available in harvestable quantities in the Great Plains states just east of the Rocky Mountains. 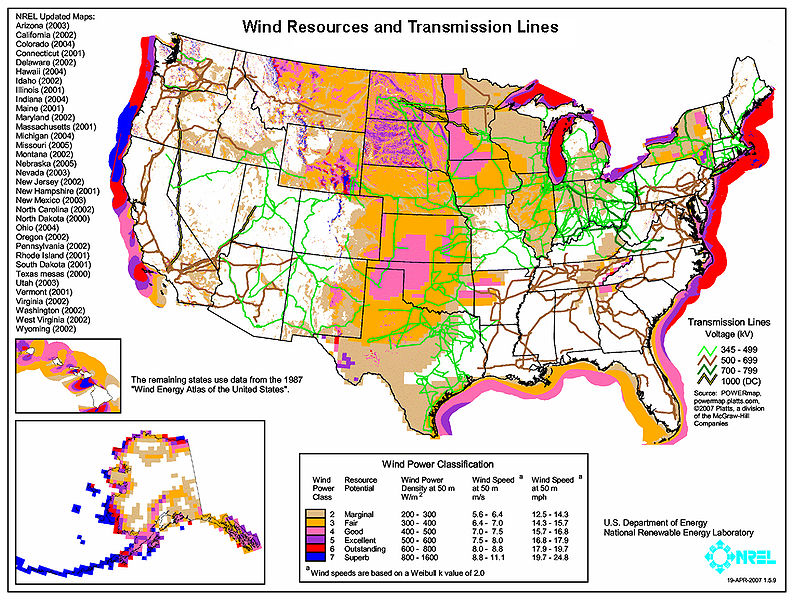 This is advantageous, as those states have vast areas with little population, flat terrain, good transportation for the long components, and lots of open, privately owned land that can be leased for wind farms and still be used for cattle grazing or farming.

At 30% Gross Capacity Factor, with 80 meter tower height, according to the U. S. Department of Energy, the limit for harvestable wind power in the 48 contiguous U. S. states is 38 PetaWatt-hours (38 X 1015 watt-hours [wh]). In the US we need to generate at least 30 PetaWh from all sources of energy (30 X 1015 wh), just to keep the U. S. current standard of living. So wind will generate all of what is needed. About 14% of all the energy used is electrical power. Last year, the United States used 4.1 X1015 watt-hours of electricity. Harvestable wind power would be almost 10 times the electrical power we currently use. But, the land area used would total over 22% of the land area of the United States, and would require 11 million 1 MegaWatt turbines.

Figures 3a and 3b: San Gorgonio Pass, south and north sides of Interstate Highway 10, Palm Springs, California. Photos by the author.

The wind farms at San Gorgonio Pass cover 70 square miles. There are over 4000 wind turbines at this location. In all of California, there are over 12,000 wind turbines. In 2004, output totaled 4.258 GigaWatthours of electricity. In 2007, this had increased to 6.8 Gwh, 2.3% of the electricity generated in the state. This is approaching 7% of what can be generated by wind in the state of California. These three locations are the prime wind locations in California, and the best spots at each are taken. The rest of the wind power locations in California are on the coast, in very scenic locations. (For a sneak-peek at today’s California electrical use and the renewables availability see this site.)

In California, a transmission line from the nuclear plant at Palo Verde, Arizona to Los Angeles passes through the San Gorgonio wind farm area. The wind farm thus supplements the nuclear power. San Gorgonio generates less than 0.03% of the power generated at Palo Verde. Most Southern California electrical power comes from Arizona, Utah, and Nevada. Out of state generation accounts for 31% of California’s electrical power, 24% from other Southwest states, and 7% from the Pacific Northwest. Southern California has also imported power from the Cerro Prieto geothermal plant in Mexicali, Baja California Nord, in Mexico.

In the U. S. as a whole, 94.65 Twh were wind generated in 2010, also 2.3% of the electrical power generated (over 4,100 Twh or 4.1 X 1015 watt-hours). Two states, Iowa (15.4%) and North Dakota (12.0%) generate more than 10% of their power from wind. Minnesota (9.7%), South Dakota (8.3%), and Kansas (7.2%) are not far behind. (Source: Wikipedia) In these states wind power makes sense because the resource is available, the amount of power needed is low relative to the area, the power is used locally, and wind power is competitive with other sources. The percentage of wind generated power has not reached the point where backup power when the wind stops is a problem.

What are the downsides to wind generated power? There are several.
Wind power tends to drop when you most need it.

During the last few cold winters in the U. K. wind power generation dropped to very low levels during the coldest days. This happens everywhere. Wind power cannot be depended on to supply heating electricity when it is most needed. It must be remembered that all heating systems require some electricity to move the heat within the system. In California, wind power generation has a definite daily pattern, low in the morning and ramping up during the afternoon. But this pattern doesn’t happen every day. See A Grid Manager’s Nightmare. To provide power when the wind dies, a grid manager must have an equivalent amount of other generation available, usually fossil fueled, or the lights will go out. The U. K. solves this problem by importing nuclear power from France. Denmark imports hydroelectric power from the rest of Scandinavia. If all the euro-zone countries continue to expand wind power, there will come a point where sufficient backup power will no longer be available.

In California, a report by KEMA Inc. written in June 2010, states:

Researchers concluded that accommodating 33 percent renewables generation by 2020 will require major alterations to system operations. They also noted that California may need between 3,000 to 5,000 or more megawatts (MW) of conventional (fossil-fuel-powered or hydroelectric) generation to meet load and planning reserve margin requirements.”

There are several ways one can get killed by a wind turbine. Bird kills are just one downside. In the U. S. state of Montana, a study found that three times as many bats were being killed as birds. One reason is that bats don’t need be struck by the blades to be killed. A bat’s lung structure is such that the pressure change as the blade passes by ruptures lung tissue and kills the bat from the “bends”.

A wind turbine is a tall tower first of all. Falls from a tower higher than 20 meters usually has a bad outcome. This means that to work on a turbine requires a safety line. This leads to another problem. Outside the turbine nacelle there are the rotating blades and a shaft. If the line gets tangled in either, the wearer is pulled off the nacelle and into the blades or shaft… Not good. Inside the nacelle, there is the rotating shaft, gears, and the generator. If a safety line, clothing, or a hand, gets caught in the rotating machinery, the resulting escalating injuries are inexorably and agonizingly fatal.

One worker was killed inside a tower by falling ice. The falling sheet of ice nearly cut him in half. Ice throw by the turbine blades has been documented to 150 meters. Calculations have predicted ice throw to half a mile (nearly 1 kilometer). Blade failure throw has been documented to 1300 meters. The recommended distance to occupied housing due to blade throw, noise, and shadow flicker from blade rotation through sunlight, is 2 km. Shadow flicker can trigger epilepsy in sensitive individuals.

There have also been many fatal accidents during the transportation and construction process. Erecting a large wind turbine requires moving very long loads on the highways, and using very large cranes to erect the components. Both processes are hazardous. There have been a total of at least 78 people killed in the wind industry as of March 31st of 2011.

Small wind turbines hum. Large wind turbines, as the blades pass the tower, make a low frequency thump as well as low frequency “swish – swish” sounds that can travel for miles. One reference mentioned that the Nazis used similar sounds for torture. Farmers near wind farms in the U. K. and Taiwan have reported livestock losses reportedly from lack of sleep.

Fire is a hazard for wind turbines

Electrical components can short out, overheat, or otherwise fail causing fire. Gearboxes can leak lubricants, overheat, and catch fire. Lightning can cause fire, and a wind turbine is a tall object that attracts lightning. A wind turbine contains many gallons of flammable lubricant and hydraulic fluid. To reduce weight, a wind turbine nacelle is often fiberglass or other plastic that can burn and melt, dripping flaming material onto the surroundings. Local fire departments usually respond to a wind turbine fire to simply watch it burn and control any spot fires on the ground, because they cannot fight a fire 50 or 80 meters in the air. Note in Figure 3b, above, that several towers no longer mount turbines. Their fate is not known for certain, but fire or “king-pin” failures (the shaft around which the turbines rotate to face the wind) are the likely reason. The “king-pin” is the only support that keeps the turbine on the tower.

Wind turbines are different from other generation methods in a way that exacerbates danger. There are no on-site operators. If something goes wrong that is not monitored and/or controlled electronically, a problem can spiral into disaster faster than remote operators can physically respond to the scene.

Eric Rosenbloom wrote an excellent paper in 2006 that details much of the danger from wind turbines. See his paper here.

What to do when the turbines wear out?

The usual annual funds planned for maintenance and repair for a wind farm is 4 or 5% of the cost of installed equipment. The planned life is usually 20 to 30 years. This should be thought of as the half-life of a wind farm. In this period, half of the turbines will have catastrophically failed. Usually in older wind farms, after half have failed, the others are decommissioned and eventually abandoned. If the permitting agreements have not called for removal, old wind farms are often just abandoned by owners. This is happening in Hawaii and California as this is written.

The economics of wind power, or how do we make money on this?

In Texas and Denmark, wind farm operators often pay the grid operators to take their generated power. They can do this because the subsidies they receive from the government allow a small profit. This happens because the wind power is distant from the cities that need it, and transmissions costs are higher than what the power is worth. In Texas, the power is in the “panhandle” in the north, and the power is needed in Dallas/Ft. Worth and Houston in the central and south of the state. In the U. S., Subsidies include a 5-year accelerated depreciation schedule, as well as tax rebates, and Renewable Energy Credits. The accelerated depreciation schedule means that operators will sell the wind farm after five years, the next owner will take the depreciation for another five years, and sell it again. If the new owner is a European company, they get “carbon offset” credits for an additional subsidy.

Wind power is a huge scam. There is no other way to describe it. If it were not for subsidies, no one in their right mind would build a wind farm. To learn more, this author recommends following the links in this article for as long as your nausea level will allow.