Portuguese blog Ecotretas here reveals how the IPCC completely botched its forecasts for East African rainfall in claiming the Horn of Africa should expect more precipitation. With severe drought now ravaging the region, the IPCC forecasts and models are beginning to look like a complete farce. 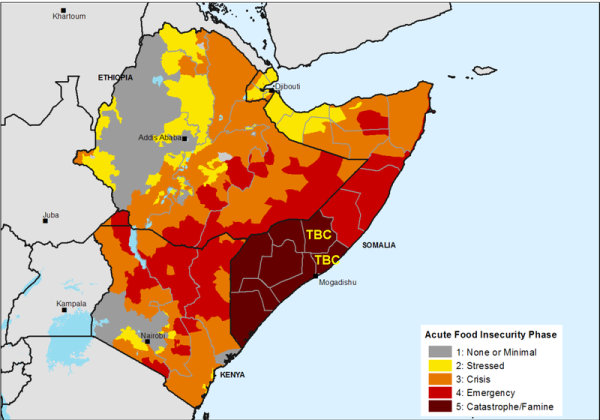 Lately we have all been hearing about the serious drought that has been causing misery in impoverished East African countries – especially Somalia with tens of thousands of deaths, and some 750 000 expected to die in the next four months, Ecotretas points out that “one would imagine that the IPCC would have predicted it” with their multi-million dollar super computer models and “leading scientists”. Well, it turns out they indeed made forecasts back in 2007, but today just the opposite is occurring, i.e. instead of getting more rainfall, as was forecast by the IPCC, rainfall has all but disappeared.

Ecotretas looked up what the IPCC projected for Eastern Africa in its 4th Assessment Report of 2007. For example in Chapter 11 of the Executive Summary:

There is likely to be an increase in annual mean rainfall in East Africa.”

The increase in rainfall in East Africa, extending into the Horn of Africa, is also robust across the ensemble of models, with 18 of 21 models projecting an increase in the core of this region, east of the Great Lakes.”

So much for the ensemble of models. Surely one can only conclude that the claims made by the IPCC’ models concerning global temperatures for the next 100 or 200 years simply can no longer be taken seriously. Read more at ECOTRETAS here.

A host of other institutes parroted the IPCC bogus forecasts

It was not only IPCC scientists who were completely wrong with East African rainfall projections, but also a number of other institutes and organisations got it all wrong – probably because they only parroted the junk scenarios put out by scientists like Mike Hulme.

Ecotretas presents a collection of more rainfall for the African Horn here, which includes Christian Aid in the UK in 2009, International Livestock Research Institute  in 2010, The World Bank in 2010, the Institute for Environmental Security in January 2011, and the Grantham Institute for Climate Change in 2009, which claimed:

In eastern Africa, including the Horn of Africa, and parts of central Africa average rainfall is likely to increase.”

When are people going to stop listening to these charlatans?