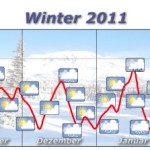 At least in Germany,  that is if the current string of harsh winters doesn’t stop. And according to Dr Karsten Brandt’s latest winter forecast for 2011/12 at donnerwetter.de, this coming winter is projected to be yet another harsh one. No let-up in sight.

That would make it Germany’s 4th consecutive harsh winter in a row. Brandt already calls 3 harsh winters in a row “unusual”.

The bulk of the cold will occur in December and January, with both months being interrupted by brief mild spells. November will start off mild, but will then fall sharply into a cold spell, with snow likely. Brandt reminds us that this a probable forecast. Things of course could develop differently.

As Brandt mentions, energy prices in Germany have surged over the years, and so many households are going to be taking another real battering with the heating costs.

Indeed today much of Germany’s inflation is driven by spiralling energy costs, due in large part to Germany’s mandatory energy feed-in laws, which require power companies to buy up renewable energies at fixed, sky-high prices and to sell it to consumers as “green” power. Power companies have no choice but to pass the high prices along to the defenceless consumers. Gas, heating oil and electricity prices are are all coupled. The only consolation consumers get, ironically, is the false belief they are helping to keep the planet from getting warmer.

Some power companies figured out creative ways of exploiting the system. According to one story I’ve heard, one Swiss or Austrian company was buying cheap French nuclear power for 3 cents a kwh, used the power to pump water in to a high-elevation pump-storage reservoir, then ran the water through hydroelectric turbines and sold the energy as green power at exorbitant prices. I have no idea how true that story is, but it would not surprise me. After all, we do know that there is no shortage of climate scams.