It begins with DIE ZEIT’s latest article on the controversial new skeptic book authored by Prof Dr. Fritz Vahrenholt (renewable energy expert) and Dr. Sebastian Lüning (expert geologist) which will hit the bookstores on February 6, published by the renown Hoffmann & Campe in Hamburg. It has the warmist activists scared out of their wits. 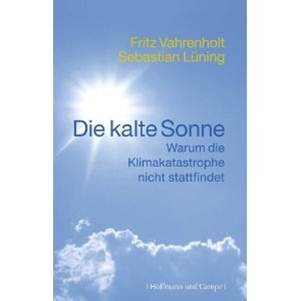 An old saying goes: Better to remain quiet and let people think you may be dumb, than to open your mouth and to confirm it. Two authors at the German online DIE ZEIT nationwide weekly, Stefan Schmitt and Christian Tenbrock, not only confirmed it, but they also jumped right into it, feet first, in their latest hit piece here.

Worse, the once respectable DIE ZEIT weekly, which Wikipedia calls “highly respected for its quality journalism”, stooped into the gutter and maliciously labelled scientists who doubt the catastrophic global warming religion as “deniers”. We all know why the word denier was chosen, and not “skeptic”. They ought to be served papers for defamation.

They haven’t even read the book

Schmitt und Tenbrock’s article is filled with Rahmstorfian-type falsehoods. What’s remarkable is that they go after the book and its two authors without having ever read it! (book release is February 6). If they had waited a little longer to read it, they would have spared themselves all the embarrassment of their ridiculous claims, falsehoods, and thus confirmation of some dumbness.

Their only crime of course is that the book’s authors are open-minded and have also evaluated skeptic arguments in their overall assessment. Their book Die kalte Sonne cites more than 800 sources from both sides, and from the middle. In fact, Vahrenholt was once a more or less a devout warmist – until he dug deeper. Yet, DIE ZEIT writes at the very beginning:

He does not. Indeed it helps to read the book first.

Schmitt and Tenbrock then claim Vahrenholt and Lüning insist the impacts of CO2 emissions can be neglected. But anyone who is familiar with the contents of the book, as I am, can say that this is also false. The truth is that Drs. Lüning and Vahrnholt clearly state that CO2 is responsible for perhaps half of the warming. This is in line with what Prof. Mojib Latif believes. DIE ZEIT is trying to frame it as a yes-or-no issue. Their sole interest is starting a food-fight, and preventing a discussion.

Schmitt and Tenbrock of DIE ZEIT also blast the two authors for attending a skeptic conference in Munich last November. What’s wrong with that?  Why not listen to both sides of the argument? Has a thought-ban been enacted in Germany? Or is this something one finds only at DIE ZEIT? Are we only to march like drones, never questioning green dogma?

It just happens that some of the speakers at the Munich Conference are also guest authors of the book and who happen to be distinguished scientists, among them Henrik Svensmark and Nir Shaviv. If Schmitt and Tenbrock had waited and read the book first, they would have known of their contribution to the book, and certainly would have learned to spell their names correctly. Tells you what they really know about climate science.

Ignorant when it comes to the CERN CLOUD experiment

Schmitt und Tenbrock are also not only unaware of the book’s contents, but also of what CLOUD project at CERN is about. They claim that CLOUD results don’t confirm anything, and make it sound like the experiment is finished.  They appear not to know that only Phase I is completed. And preliminary results indeed do fit Svensmark’s theory – like a glove. The next phase of the experiment will test to see if the tiny aerosols can form into larger ones, and is expected to end in 2014. Not only should they wait and read the book, they also ought to wait for the results of CLOUD before opening their mouths and confirming more dumbness.

Lüning and Vahrenholt “against 1000s of scientists”

DIE ZEIT (Schmitt and Tenbrock) use the old worn out consensus argument. The global warming sham is in reality perpetuated by a only few dozen scientists who have high stakes in the game. As I already wrote, Lüning and Vahrenholt cite hundreds of sources, many peer-reviewed, that challenge the AGW hypothesis and which the IPCC simply ignores. And what did the Wall Street Journal just publish? Obviously Schmitt and Tenbrock have not read that either. Do they read at all?

On page 2, DIE ZEIT uses the unfortunate “denier” slur to criminalize skeptic scientific views. I wonder if they would say that to Nir Shaviv’s face. Obviously that has backfired big time and it fully exposes their real, malicious, agenda.

At the latest since the 1980s, the Earth has been warming differently than it did in pre-industrial times, and no longer in sync with solar activity.“

Last I’ve looked, the Earth hasn’t warmed at all over the last 15 years. And if they had waited and read the book, the DIE ZEIT authors would have seen that the 22nd and 23rd solar cycles were intense ones. And, like the IPCC, DIE ZEIT simply ignores the major roles played by oceanic cycles.

To judge a book, it first helps to read it

It’s obvious that Schmitt und Tenbrock, who appear to be hopelessly biased, have long closed their minds. They were never interested at all in finding out the truth. If they had been, they would have waited and read the book – or at least interviewed Lüning and Vahrenholt.

And so with such journalists, the question arises of whether DIE ZEIT is to be taken as an open, intellectual weekly, or if it has devolved itself to being a narrow-minded purveyor of dogmatism. Can we really take DIE ZEIT seriously?

To answer that question. let’s hope Vahrenholt and Lüning send a letter of rebuttal to Die Zeit. If they are truly open, DIE ZEIT will publish it, and have alittle talk with their journalists.  But I’d bet a king’s fortune they won’t. I can tell you the answer already, I had the chance of reading the book’s  manuscript, and I know Lüning and Vahrenholt would take the DIE ZEIT piece apart in short order. Papers are not in the habit of further embarrassing themselves.

These types of journalists appear underworld-like. Journalistic drive-by shootings are sadly no longer new at DIE ZEIT and now appear to be their modus operandi. They did the same with Fred Singer, read here.

Hopefully, DIE ZEIT will someday get back to the practice of intelligent journalism, and end the cheap character assassinations and smearing. Now would be a good time for DIE ZEIT to keep their mouths closed – and to not reopen them until after February 6th.

Surely between now and then they’ll find something intelligent to say.