Ed Caryl exposes another myth using two GISS graphics. Can anyone find the accelerating global warming over the last 10 years?

In Figure 1, the continents are cooling already. So are the oceans.

Figure 1 above depicts the NH cold season temperature trend over the last ten years. The global trend is zero! (the number in the top right corner). Source: GISS.

Figure 2 below depicts the oceans only. The NH cold season ocean surface cooled 0.04 degrees C in the last decade, or 0.4 degrees C per century. 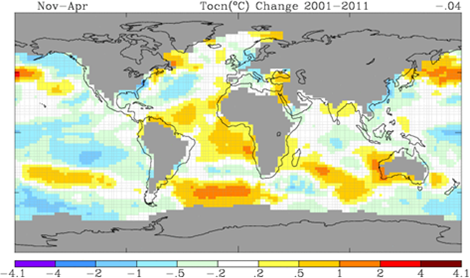 So, where’s the warming? Wasn’t it supposed to result in warmer winters?