ARD German public television presented a short clip of Fritz Vahrenholt and the contents of his new book during its early morning show on Monday. ARD had an agitated Prof Mojib Latif on to respond.It is still unclear why Latif is agitated with Vahrenholt to begin with, as they both agree that CO2 is only half responsible for the recent warming.

Most likely it all has something to do with Latif’s love of being in the media limelight. He’ll say anything to get on TV.

Sebastian Lüning, co-author of the book “Die kalte Sonne” together with Vahrenholt, responds to Latif’s comments at his http://www.kaltesonne.de website, which I present in English as follows:

Early risers today were able see a report about “Die kalte Sonne” on the ARD-Morgen magazin. The report gave an overview of the book’s positions and of Fritz Vahrenholt. Then Mojib Latif appeared in the studio, and was visibly agitated with Vahrenholt. In addition to a tirade that is truly worth watching, Latif attempted to refute the book’s main assertions. According to Latif, it could be shown just by looking at the temperature development of the stratosphere that the sun has no big impact on the course of the climate, CO2 and the sun here would lead to completely different developments. Both of these competing climate factors would each have their own characteristic fingerprint, and so it would be possible to distinguish between the two. Latif: ‘Up there 30, 40, 50 kilometers in altitude we are measuring a massive cooling. And that is precisely the effect of of CO2. That can only be explained by CO2…” .

The audience, comprised mainly of laymen, probably were impressed by Latif’s every word. Latif then delivered the knockout punch, and summarized for the audience: ‘That means that I don’t need 400 pages to show it’s the sun. I need a full two sentences to show that it’s CO2.’

Unfortunately for Prof. Latif, stratospheric cooling cannot be in any way a strong indicator for a powerful climate impact by CO2 because:

1) The cooling of the stratosphere occurred mainly during the 1980-1995 phase, a time when the ozone layer was thinned out by FCKW emissions, as the following figure depicts: 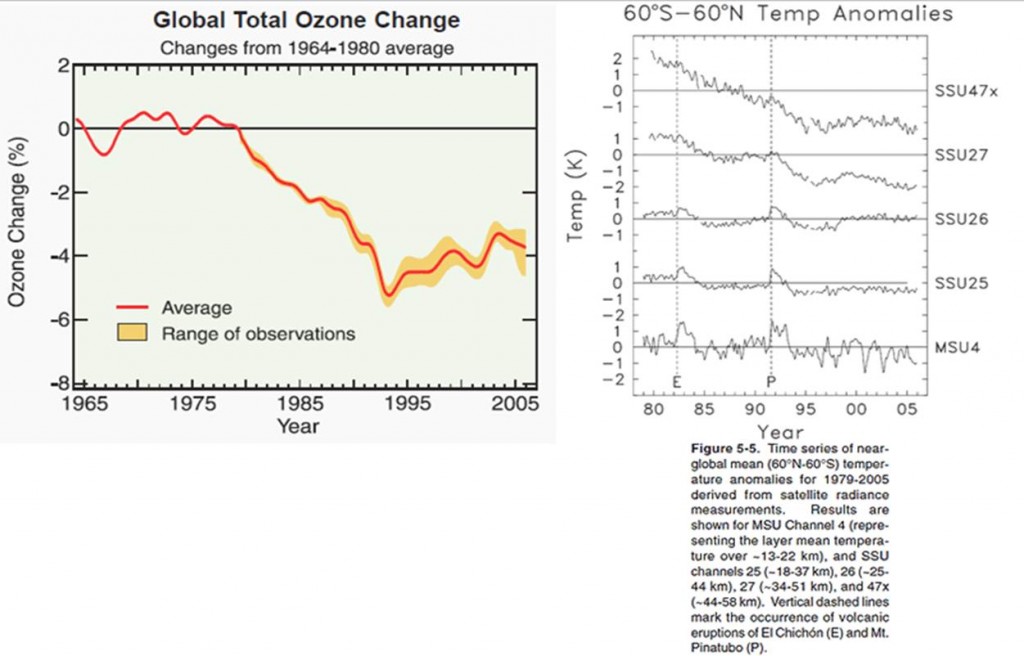 The thinning out of the ozone led to a continuous decline in stratospheric absorbed solar energy, which led to a cooling in the stratosphere. In the 1990s, CFC emissions were cranked back by the Montreal Protocol and the ozone layer has been slowly recovering since 1995. Since 1995 there’s been no significant temperature changes – the values have been oscillating about a plateau.

For Latif, explaining why CO2 is the dominant driver can be done in only two sentences. Exposing these people for who they really are is turning out to be much easier than imagined. In the interview he says he did not even buy the book, and that he only read a few excerpts of it. Latif is not serious with his conclusion on the book.